Let's just say that I've come to hate climbing stairs!  Yes, I know they're probably good for me, a great workout and calorie burner with some cardio thrown in, but still I don't like them.  I first discovered this dislike for stairs last year while in Paris. We used the metro to travel throughout the city and while riding the subway was good, the stairs up and down into the metro stations were not. So here we are again taking this great, clean, safe, cheap metro around the city which means climbing hundreds of stairs at each station.  But I'd better get used to stairs since we plan to travel with world using public transportation and living without a car.

Today's adventures began with a 20 minute walk from our hotel to the metro station in Poblado, the section of town we're staying in. 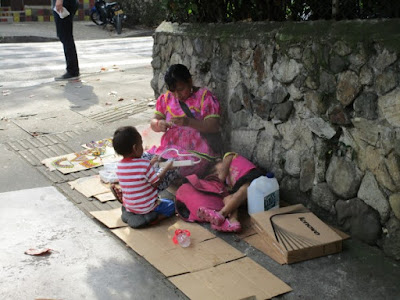 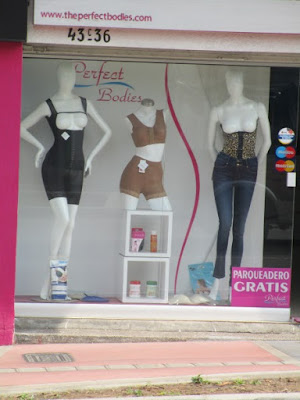 Clyde went to buy the tickets and off we went through the turnstyles.  We exited the metro at the station to the cable car....and easy transition from one to the other without ever leaving the terminal.  We climbed into a free cable car which would take us up through the poorer "obarrios" or neighborhoods of Medellin.  The metro cable cars stop at three stations along the route before ending at Santa Domingo.  From there we had to buy other tickets for around a dollar that would take us up to Park Arvi, high in the mountains.  The whole trip on the cable cars alone took around 40 minutes.  The cable cars are quiet, easy going transportation that offer a cheap way for locals to get up into the barrios. 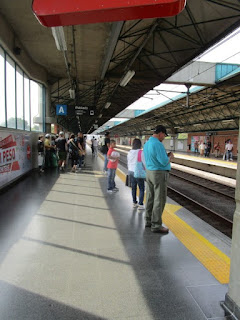 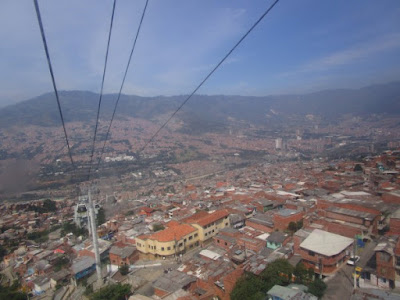 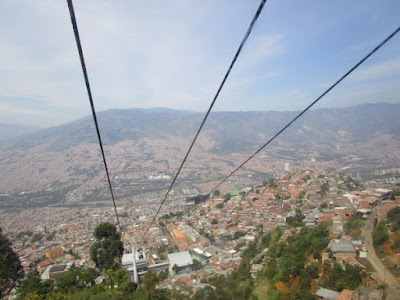 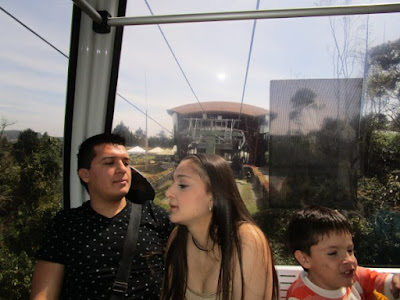 Clyde Was Taking The Photos
A Young Couple In Love......All Over Each Other In Cable Car
The Boy Was With Someone Else
﻿ 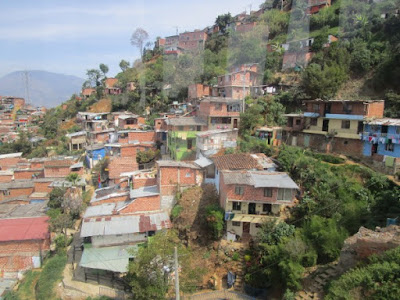 Houses Piled On Top Of Each Other Into The Mountains

Park Arvi is an ecological park and nature reserve in the mountain town of Santa Elena with no entrance fee. Clyde stopped to look at a map while a guide began explaining where the "senderos" or hiking trails were.  There seemed to be only two trails and each would take around three hours to hike......a bit too long for our tired bodies that have been walking every day lately. We did find a shorter trail that took us around 30 minutes.  It went through the woods and over a few bridges before ending at a main road where we turned and walked back in the other direction.  Since it was past lunchtime we stopped to buy a fruit cup from one of the many vendors in the park.  Colombians love to spread sweet cream on most everything and fruit is no exception.  Our little fruit cup included strawberries, raspberries and little orange balls called, "uchuvas," a sour tasting citrus fruit. 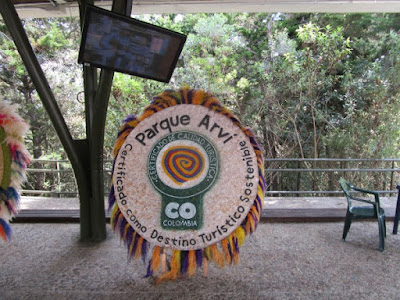 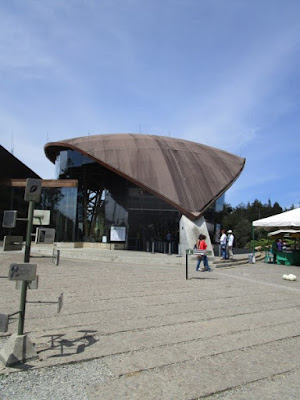 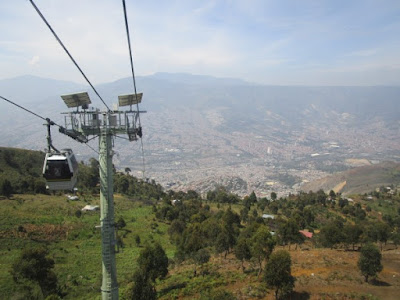 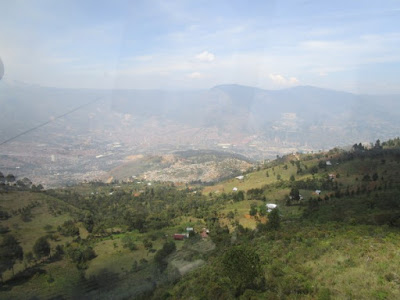 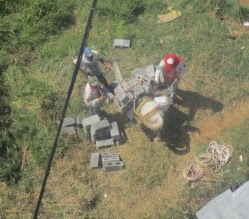 How To Get Building Supplies Up Into The Hills?
Load Blocks Onto A Horse 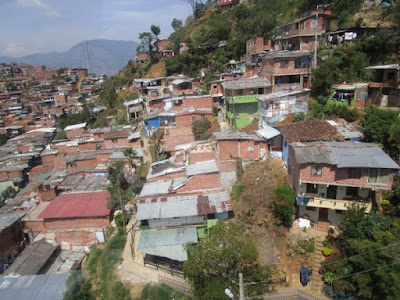 
﻿
﻿
﻿
After our snack we headed back down the mountain in the cable cars again and later to the metro.  We hopped off the subway at a few areas of the city to walk around.  One stop was the planetarium and the next show was in 45 minutes but the women told us it was mostly for young kids so we passed. After we'd had enough walking around the city we headed back to our hotel for our afternoon rest. 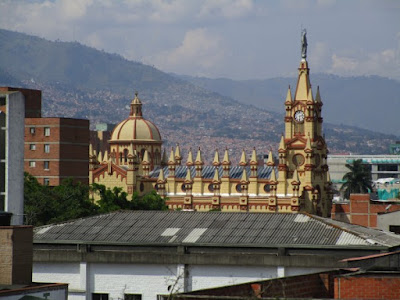 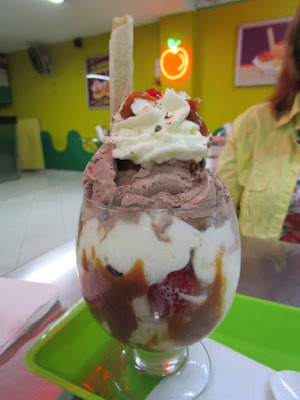 A Little Ice Cream......With Fruit So It Must Be Healthy?
We Did Share This Sucker 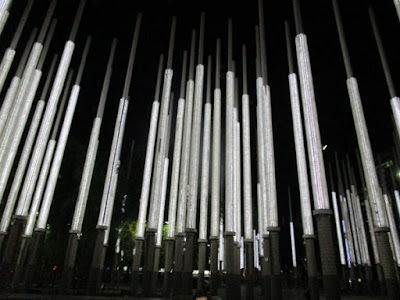 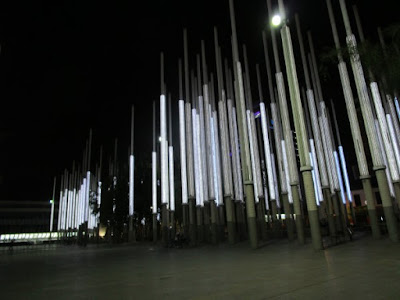 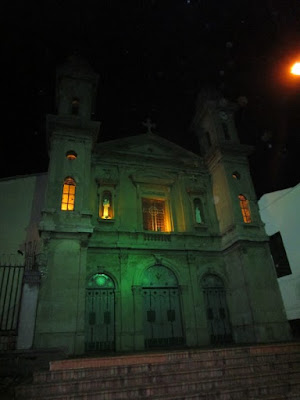 A Church At Night 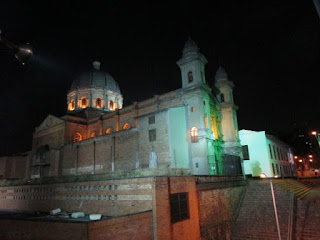 Another View Of The Church

﻿
﻿
Once we revived ourselves we headed out for dinner and then took a taxi to Parque de la Luz, or "light park." Everything that I read online said the park was in an unsafe part of the city and should not be visited at night.  Well the mere name of the park indicates that it must be visited at night to view the light display.  So when in doubt I believe to ask a local and we did.  We chatted with the taxi driver who assured us that the park was safe for us to walk around.  Although our research said the light display in the park is supposed to change colors after a while, we saw nothing happening so we gave up. Clyde wanted to take a few photos of a nearby church so we walked through the neighborhood and I admit it looked and felt a bit seedy and unsafe.  Once we'd had enough the safest and quickest way out of there was by taxi.

Speaking of asking the locals for their opinion on something I did just that the night we arrived at our hotel. Many things I'd read online about Colombia said not to drink the water here while others said it was ok.  Some friends recently returned from Medellin and they did drink the water and said they were fine.  So I asked the front desk clerk as she showed us our room and she smiled and explained in Spanish that the water here was wonderful and safe to drink.

Something I'd forgot to mention in yesterday's blog is this.  Our taxi driver\tour guide Alfredo was a rather pudgy guy who admitted that he loved to eat.  He explained that he was on the CHI diet which included, chicharons, chorizo, churros, chuletas (pork chops) and chocolate to name just a few. We got to talking in Spanish of course about fruit and he asked us if we like grenadines?  While I'd heard the name I don't think I've ever eaten one, but he went onto say that we must try them.  So a while later he stops at a toll booth to pay the toll and lo and behold the toll taker has a grenadine sitting there for a snack.  Alfredo asks the young man if he could see the grenadine for a minute and the man hands it over to him.  He begins explaining to us that this is a grenadine. Next he asks the toll taker if he could have it and before he agrees Alfredo breaks open the fruit and passes it around for us to taste.  He then thanks the toll taker and drives off leaving him befuddled as to what just happened.

Another fun but tiring day of roaming the streets, taking the subways and taxis and experiencing real life in Medellin, Colombia......along the gringo trail.