Going Back In Time.....To Granada, Nicaragua

We arrived in the colonial little village of Granada, Nicaragua around one in the afternoon.  The tropical sun was blazing down as our driver let us out in front of our apartment complex.  The receptionist was waiting with our keys in hand and quickly showed us to our apartment.  The small compact villa was modern and came fully equipped with all the necessities of home.  A tiny kitchen, living room with pull out sofa-bed, and the master bedroom with a king sized bed with bathroom nearby. 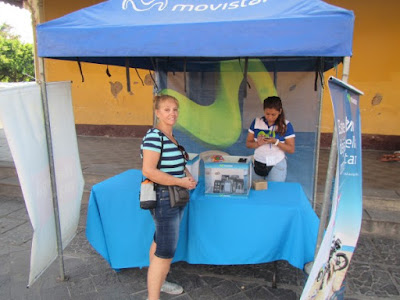 Buying A Chip From Movistar for Our Cell 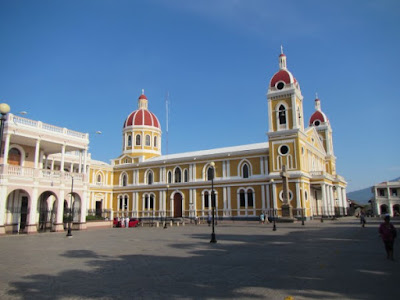 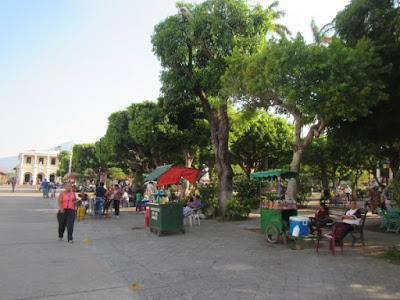 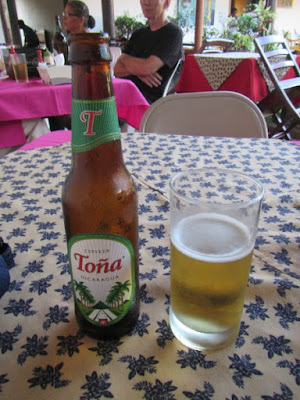 One Of The Local Beers 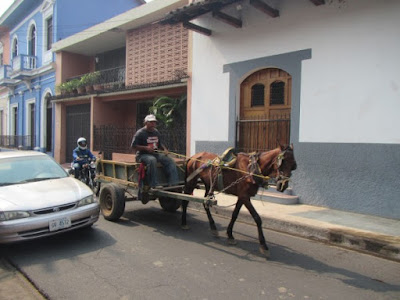 Quickly we dropped off our stuff, changed into shorts and headed out to explore the city.  As Clyde went to lock the door the key broke inside the lock.  Now what? Just then we noticed a gringo coming down the stairs from the upper level of apartments.  We stopped to talk asking her where the manager or owner was to help with our key issue.  Apparently the owner of our apartment was not on the premises, neither was anyone else that could help us.  She suggested we just hide any valuables and go on with our day as if nothing happened. The outer perimeter of the complex was behind a locking gate so the only ones that might steal from us are the people that live here. So with no other choice we took our passports with us, hid our electronics and went out to explore.  Fortunately when we returned later that evening everything was as we'd left it and someone was on the grounds to lend us a new key. 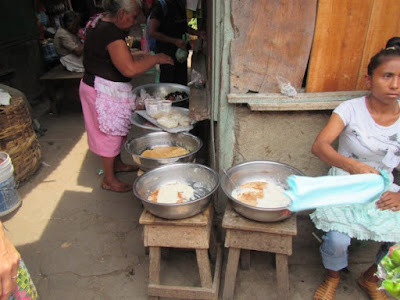 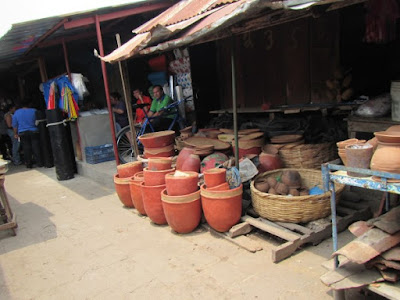 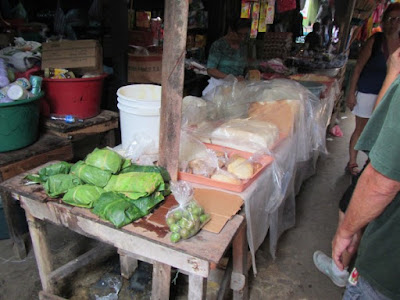 They Use Banana Leaves To Wrap Many Foods 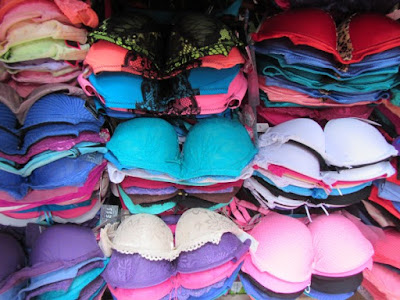 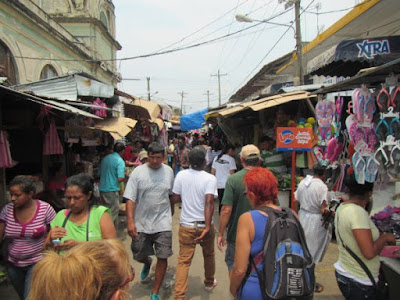 Walking Through The Market 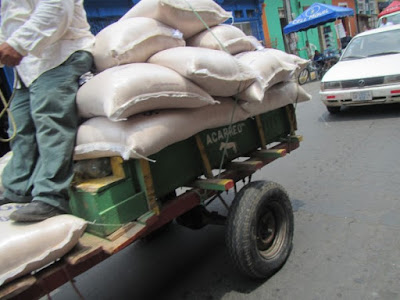 Cart Load Of Something? 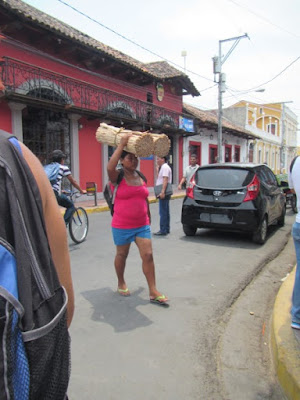 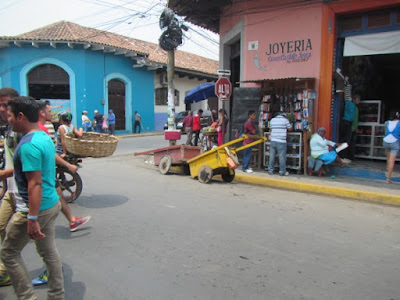 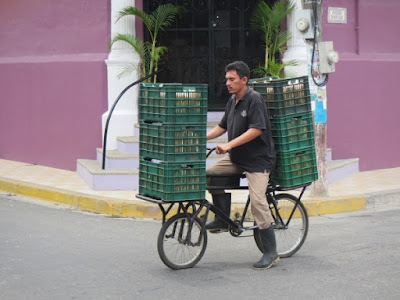 The apartment rented for only $53 per night and comes equipped with air conditioning and even a pool right outside our door. While we might think Panama is HOT.....Nicaragua is even HOTTER.....or so it seems!  The days are scorchers here and sweat just drips off every inch of our bodies while walking around, even in the shade. So coming back here to a/c and a dip in the pool after sweating all day is a welcomed treat.  While we do have WIFI it's been rather sketchy, on and off and basically lousy.  As I write this I need to stop and reconnect every few minutes, hoping to save what I've written.

One of the reasons we wanted to come here was to see how our friends Pat and Rich from Austin, Texas were enjoying their retirement here. We met up with the ambitious duo for drinks and dinner at a local expat hangout, a regular hotspot here on Friday nights.  Soon after meeting many of their expat friends we discovered many other Texans here, just like we have in Panama. 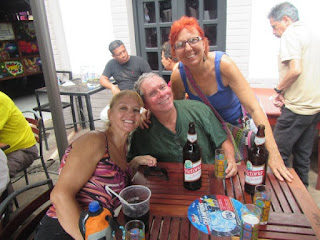 Terry With Friends Rich And Pat
﻿

The next morning with the help of friends Pat and Rich Buff we headed out to have a key made. First they took us to a hardware store but they didn't have the blank to make the key but sent us to another.  The second store, so to speak, was in someone's living room with the equipment to make keys in one corner of the room.  Clyde and Rich went inside and said the man's sons were watching tv and had to move over to let the guys sit down while waiting. 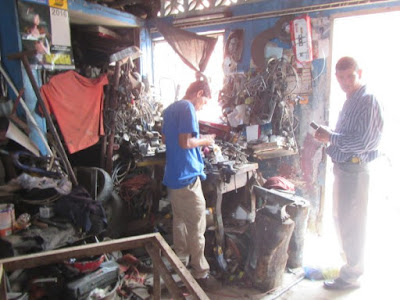 Getting A Key Made Inside Someone's Home 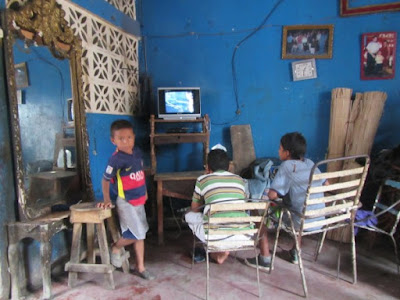 The Living Room Of The Key Maker
Yes, This Is A Real Home
﻿

Yes this place is third world and probably what Panama was twenty years ago.  Locals get around using public transport or horses.  Time to move, have furniture delivered or anything else.....it's done with a horse pulled cart of some type.

The next morning we met up with Rich and Pat for breakfast before they took us around the city to explore.  Our first stop was the marketplace where locals sell everything from bras to produce, and we even saw freshly made "arroz con leche" rice and milk sitting out with no refrigeration in the heat of the day.  Yuk! Not for me but perhaps Nica's have stronger tummies that us foreigners and can handle curdled milk? We walked down to Lake Nicaragua and around the malecon, a path that goes along the lakefront.  There we saw cows, horses and even pigs feeding near the waters edge.  Later that evening after leaving our friends Clyde and I headed to the grocery store by foot.  For just $18 US we picked up several bags of groceries that included breakfast items and snacks to use in our apartment. Tired for a day of walking we opted for a taxi back to the apartment, at a cost of a buck or two.  Taxi's are in private cars here that are......rather rustic looking to say the least.  Equipped with NO a/c, our driver had his wife and daughter in the front seat going along for a visit. 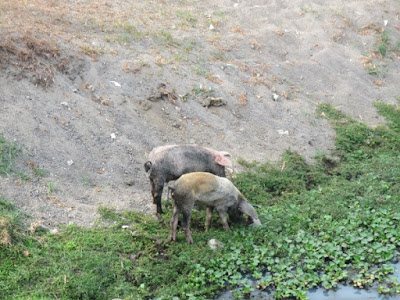 Couple of little piggies eating grass near the lake 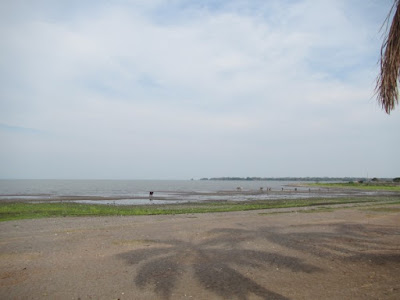 View of lake, those are cattle grazing along the banks of the lake
﻿

Clyde and I made it back to our apartment around six in the evening, tired from a long day of having fun.  For dinner we walked a few feet from our apartment to pick up some Nica street food.  Chicken taco's, although much thinner than the Mexican version, along with an enchilada all topped with cole slaw, sour cream and wrapped in huge banana leaves.  The leaves serve in place of foil or plastic wrap and I had to wonder if they were cleaned before hand?  Probably better that I don't know the answer to that. 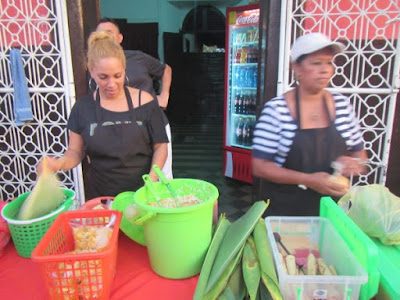 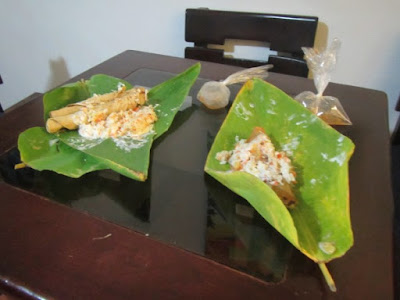 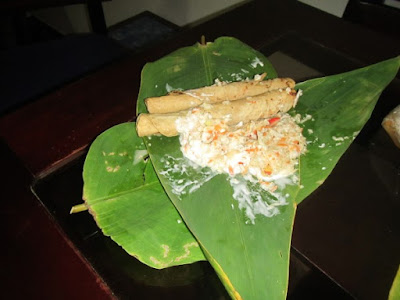 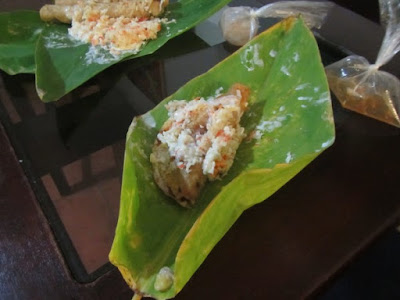 Everything is much cheaper here than Panama, and since Panama is much cheaper than the US you get the idea.  Meals out can be enjoyed for $2 to $4 US.  The local money is called the Cordoba and the current exchange rate is $1 to .28 Cordobas.  For a nice comparison local Panamanians make around $400 per month in wages while Nicaraguans take home just $200 per month! But the people of Nicaragua are friendly, inviting and accepting of foreigners that invade their space.  Since Granada is rather touristy many of the locals speak some English, not something we often see in Panama.

Time to get ready for another day out sweating, sightseeing and enjoying life in Nicaragua with friends.....along the gringo trail.