Last week we set out on a road trip into Panama City to visit the Museum of Biodiversity.  Designed by famous Canadian architect Frank Gehry who's married to a Panamanian, he chose to donate his design to his wife's home country. While the idea of the museum was first discussed in 1999, it wasn't until 2014 that it first opened to the public.  Construction began in 2004 with a 60 million dollar budget, but setbacks occurred pushing back the opening until 2014. Built at the end of the Amador Causeway facing the Pacific Ocean it sits near the entrance to the Panama Canal. The building offers panoramic views of ships transiting the canal and feels like it's floating on water. The unusual design of the building employed techniques never before used in Panama which left many an architect confused.  Each panel was painted a different color giving the building a tropical look so common in the area, although the design is like none other seen around here. 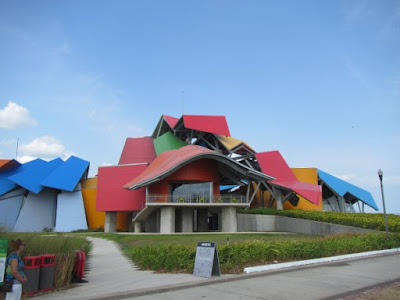 More Of Its Strange Design 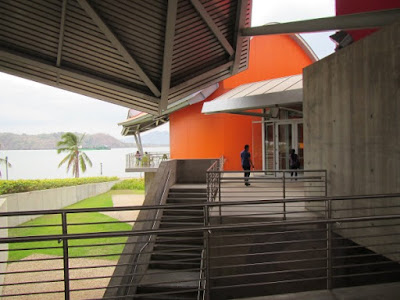 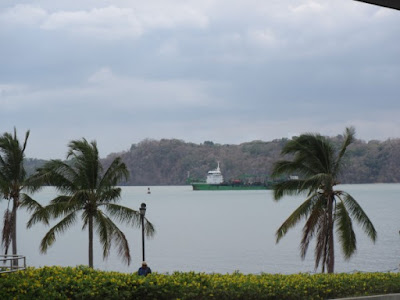 Panoramic Views Of Ships In The Canal 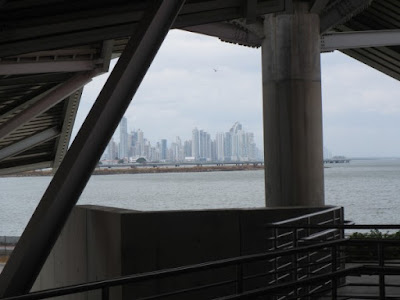 
While the museum still has plans to expand over the next few years by adding two large aquariums, what has been completed was nicely done. If nothing else it made it's point of how important this little country of Panama is to the rest of the world.  Not only because of the canal but by forming this narrow, snake-like land bridge that changed the formation of the earth. Below is some of what we learned about how Panama changed the world. 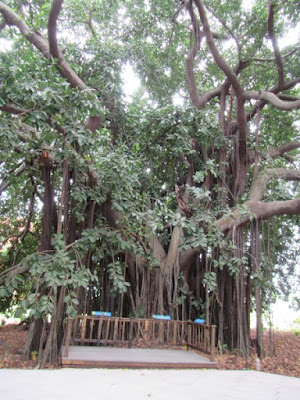 Millions of years ago there was a gap between the continents of South and Central America filled in by water from the Atlantic and Pacific Oceans.  Under the water two plates of the Earth's crust were banging into each other, producing heat and pressure which lead to the formation of underwater volcanos. Some of the volcanos grew tall enough to break the surface of the water forming islands as far as 15 million years ago.  The movement of two Taconic plates was pushing up the floor of the sea, eventually pushing some areas up above sea level. 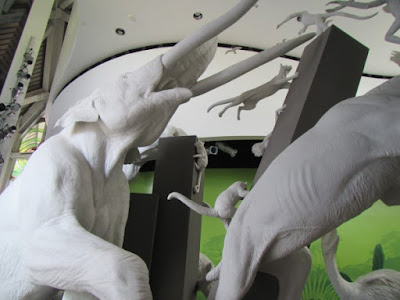 Giant Animals Once Roamed Around Panama


Over time large amounts of sand, mud, and soil were pulled away from the two continents and added to the islands helping them to grow. Eventually over time the islands were connected and formed an isthmus or land bridge, the country that we know today as Panama. 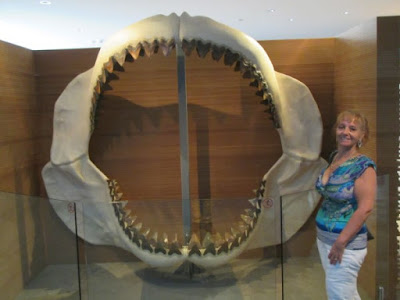 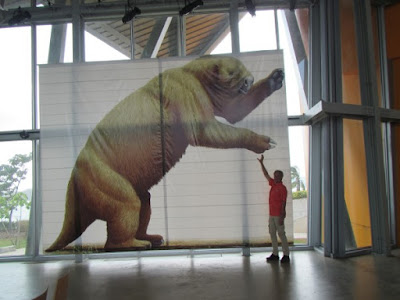 A Giant Sloth With Little Clyde

Scientists believe that the formation of Panama is one of the most important geological events to happen on earth in the last 60 million years. Although small is size the impact Panama had on the rest of the world was massive.  The land bridge shut down the flow of two oceans which re-routed currents in both the Atlantic and Pacific oceans. Atlantic currents were forced northward and developed into a weather pattern currently known as the Gulf Stream. With warm Caribbean waters flowing toward the Atlantic, temperatures in northwestern Europe became warmer.  And since the Atlantic Ocean no longer mixed with the Pacific, it became saltier too. These changes regulated patterns of rainfall which in turn created new landscapes. 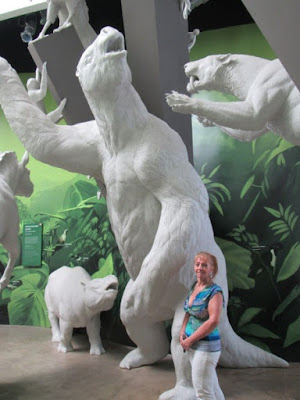 Recreation Of Giant Sloth That Once Lived In Panama 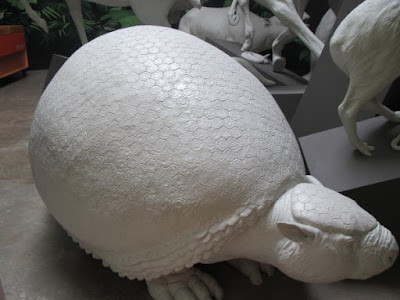 The land bridge called Panama played a major role in the biodiversity of the world.  By connecting two continents animals and plants were able to move from one continent to the other. Animals of North America today like opossum, armadillo and porcupine all came across from South America.  Likewise animals such as bears, cats, dogs, horses, llamas, and raccoons all came from the other side. 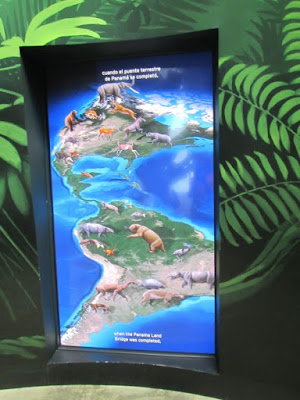 The Great Migration Of Animals 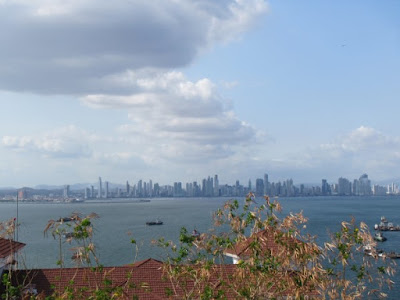 Views From Nearby The Museum Overlooking The City 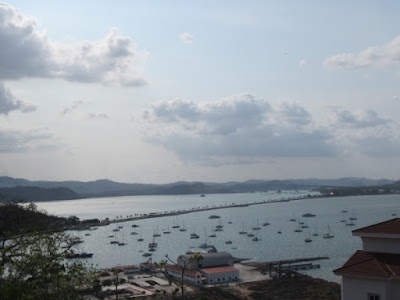 Boats Waiting To Transit The Canal 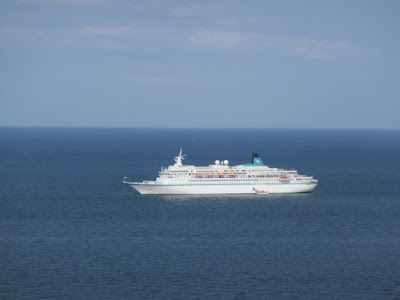 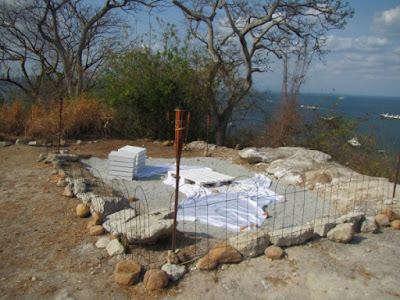 High Above Panama City We Found This Spot Set Up On The Edge Of A Cliff
Complete With Tiki Torches, Chinese Lanterns Hung From A Nearby Tree,
Seats And A Silky Sheet On The Ground
A Place To Get Away With Friends Or Lovers? 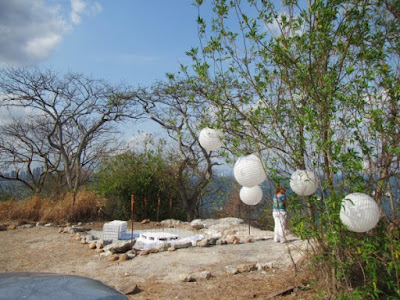 Another View From The Side


For anyone visiting or living in Panama a stop at the Museum of Biodiversity in Panama City may provide a nice break from daily routines. All exhibits are in both Spanish and English and the staff all seemed to speak both languages too. A future exhibit includes two large aquariums, one featuring marine life from the Atlantic and the other featuring the same from the Pacific. Although they are not scheduled to be completed for years to come, surely we'll be long gone from Panama exploring other parts of the world........along the gringo trail.