Visiting The Holy Land.....Israel....Part One

Disclaimer: Our week touring the Holy Land was a blur of too much information and remembering amazing sites along the way. Days were long and internet was scarce so I am writing this a week later from memory so please do not complain about my lack of facts or biblical information. It is what it is, just a recollection from two tired nomads travelling the world.

Our plane landed in Tel Aviv Israel where we were picked up by a driver from our hotel in Jerusalem. The one hour drive passed by quickly as we chatted to a Canadian couple who was booked for the same Holy Land tour. We made our way to our hotel and quickly dropped off our luggage before heading out to find some lunch. Armed with a map of the city provided by the hotel we ended up in a nearby shopping mall and found our way to the food court, thinking there would be something we could recognize there to eat. Wrong! While each restaurant offered a large menu, some with photos, everything was written in Hebrew which is written backwards and upside down.....literally. 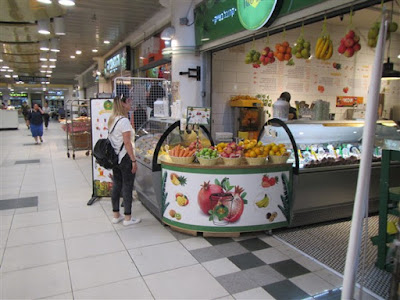 Throughout the week of touring we encountered massive crowds of tourists, pilgrims, buses and more all looking for a life changing experience, retracing the steps of Jesus.

We managed to get a plate of chicken shwarma (slow cooked meat that we recognized from Egypt) with salad, fries and a thick pita bread and drinks for around 49 shekels each which translates to around $13. Ouch....expensive compared to the dollar prices we paid in Egypt. Next we headed out onto the streets of Jerusalem to explore this vibrant, Holy City. We hopped onto the local tram and made our way to Old Jerusalem to literally walk on the same cobblestoned streets where Jesus once walked. 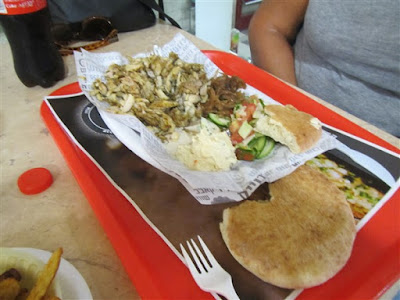 The next morning we met with our tour guide Patrick along with about 38 others to start our Holy Land tour that would last through the next week. We boarded an air conditioned bus and headed to the old part of the city once again to begin exploring with a knowledgeable guide. We passed through the Jewish quarter to the Western Wall of the city more commonly called, "the wailing wall." There we joined others to touch the wall and slip notes with prayer requests into its slots. It was an emotional experience, but just the first of many here in Israel.

Next we toured the Church of the Holy Sepulcher  which according to tradition was built upon the tomb or cave where Jesus was buried and three days later rose again. Wow.....and here we were about to see this most Holiest of places. A shrine was built on top of the tomb and the line into this most Holy place was long.....with many a miserable tourist trying to push their way in front of others. Our tour group was only in the church for about thirty minutes so we phoned our guide and asked if it was alright that we passed on the rest of the tour to wait in the long line? He agreed so we stayed and waited for an hour or two to see the spot where Jesus was laid to rest. Afterwards we made our way back to the hotel using the public tram system.

The next day we were up bright and early again to meet our guide at 8am for another long day of exploring Israel. We passed by the Mount of Olives which boasts having olive trees that are over 900 years old. These ancient trees have massive trunks and still produce fruit. Nearby at the foot of the mountain we stopped at the Garden of Gethsemane where Jesus prayed and his disciples slept the night before his crucifixion.


We stopped at the mosaic-coated Church of All Nations which houses The Rock Of Agony, a slab of rock where Jesus prayed before his arrest.

Next was a stop at Yad Vashem, the museum that honors the victims of the holocaust. It was an emotional, eye opening experience that taught us much about Hitler and how many Jews he had killed.  The name "Yad Vashem" is taken from a verse in the Book of Isaiah and refers to leaving behind a memorial of those Jews that have no one to carry on their name. We had no idea that Hitler killed Jews throughout all of Europe, a total over 6 million Jews were killed just because Hitler didn't like them.


Afterwards we drove through the village of Ein Karem, the picturesque village that was the birthplace of John the Baptist. As tradition tells us an elderly woman and her husband were impregnated at the same time that Mary became pregnant with Jesus.

While our tour was great we were a bit shocked by how expensive Israel is compared to Egypt. The price of our tour included breakfasts and dinners but not lunches. We paid anywhere from 49 to 80 shekels for lunches which translates to $13 to $23 US dollars for each meal for each of us. Most days we were offered a choice of 1-3 items that always included chicken shwarma (slow cooked chicken with spices) or falafel (vegetarian meatballs made with chickpeas). Alongside the protein choices were a selection of salads, hummus dips and thick, fresh pita bread.

After spending three days touring from our hotel in Jerusalem we packed our bags and moved to our next location of Galilee. Here we stayed in a traditional styled kibbutz hotel, a group of rooms centered around a main house. Back in the day kibbutz's were used to house farm workers, pilgrims or anyone coming together with a likeminded purpose.

Oh Little Town Of Bethlehem.....those lyrics will never have the same meaning again after seeing the "real place." We were surprised to discover that the town of Bethlehem is NOT part of Israel but instead is located in the West Bank under control of Palestine. Our guide Patrick actually had to leave the bus as Israeli's are NOT permitted to enter this area. We were passed off to a Muslin guide since the town is made up mostly of Arabs. Before entering the walled town we passed through one of three guard gates. 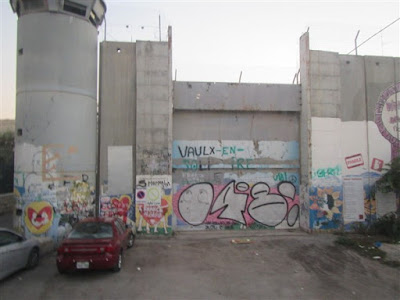 We drove to the Church of the Nativity to see the grotto or cave, the famous spot where Jesus of Nazareth was born and where he was laid in the manger afterwards. Again we waited in a long line of tourists to see this Holy spot. Interesting to know that Bethlehem is the only place in the world that celebrates Christmas three different times. Like other well known Holy Land churches this one is owned jointly by several different religions each celebrating their own holiday. Catholics and Protestants celebrate the holiday on December 25th while Eastern Orthodox celebrate on January 7th, and Armenian's celebrate on January 19th. Perhaps a dream come true for lovers of Christmas or a nightmare of expenses for others? 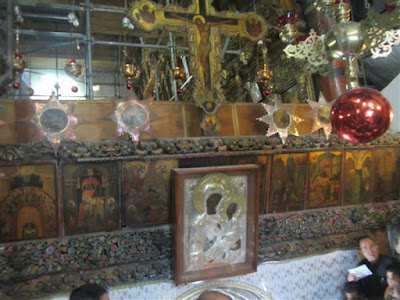 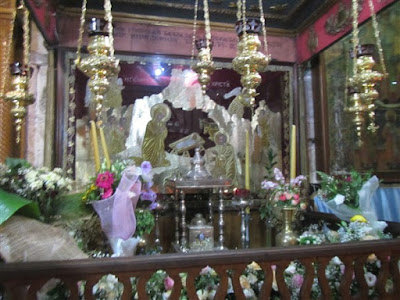 Our bus took us through the Jorden valley nearby the ancient city of Jericho, to marvel at the oldest city in the world. Jericho dates back to 9000 BC and has been continually inhabited ever since. Like Bethlehem, Jericho is also under Palestinian rule. We stopped at Beit She'an National Park, home to a well-preserved Roman Byzantine city. After lunch we headed to Nazareth where Jesus is said to have spent his childhood years. There we visited the Church of the Annunciation and Mary's Well. 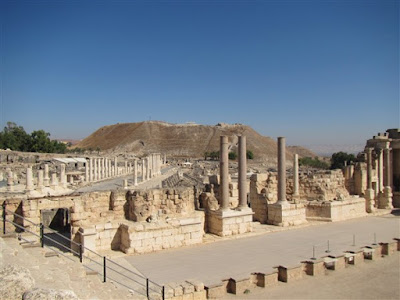 The Church of the Annunciation was built on the site where tradition says the angel Gabriel appeared to a teenage girl named Mary, telling her she would become pregnant with the Son Of God, Jesus.  The church was full of Mosaics gifted from different countries of the Virgin Mary.  It was wonderful to see what each country thought Mary looked like. Because of this the city of Nazareth and this church are considered to be one of the most holy places in the world. 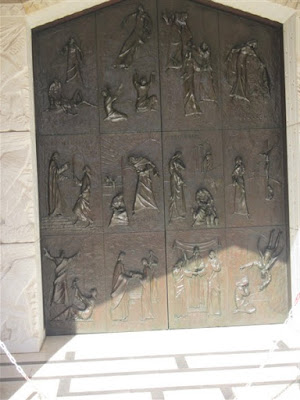 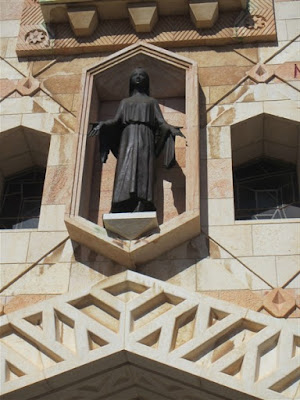 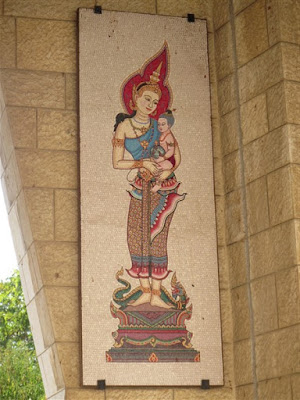 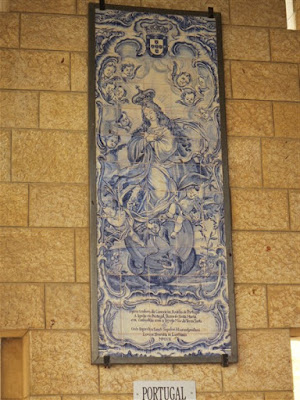 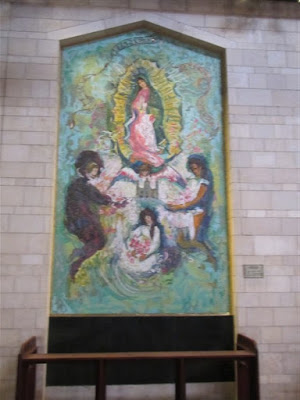 During the times of Jesus the city of Nazareth was considered to be a dump that nothing good ever came out of.  Next we visited Mary's well an ancient well that Mary was said to have drank from with water that still today is thought to be sacred. 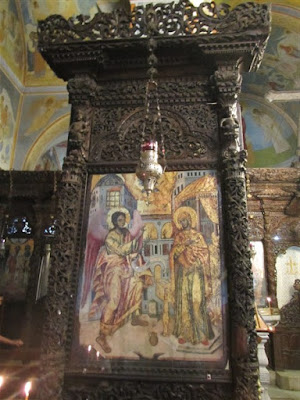 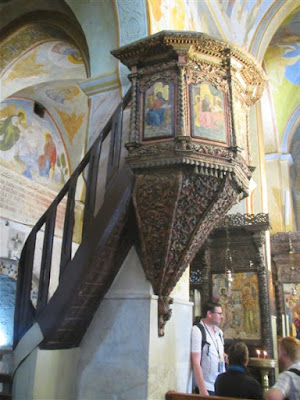 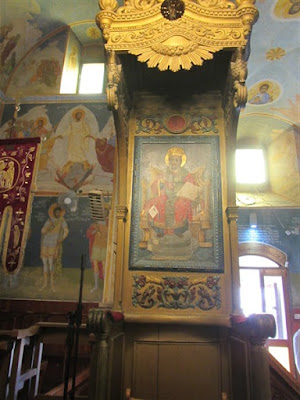 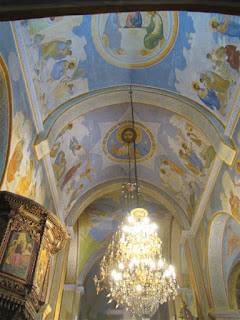 Next we visited the cobblestoned, ancient city of Safed. Continually inhabited by Jews for the past 2000 years, Safed is the home of Kabbalah, an offshoot of Judaism practiced by many here in Israel.
Full of charming synagogues this was Patrick's chance to try and educate us about his religion. We entered a colorful synagogue for a peek into Jewish life where we asked questions and gained a wealth of knowledge about Israel and its people. 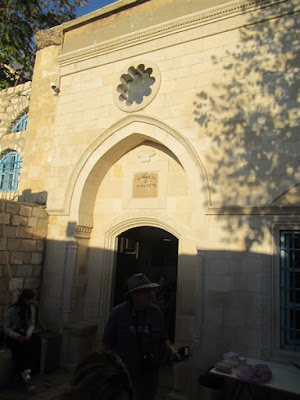 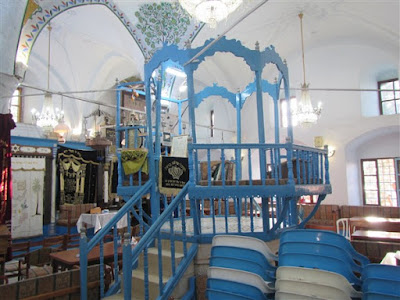 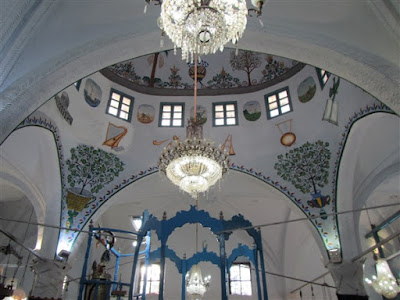 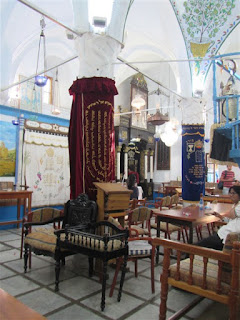 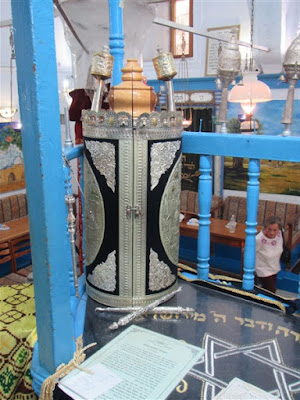