Our New Home In Portugal......The Decision Has Been Made....

Sometimes we just have to believe that something out there that is greater than us will lead us in the right direction and help us make the right decision. This was the case in finding a place to live here in Portugal. While we had decided that we wanted to live in a town not in the country, in an apartment not a house and in certain towns that seemed to have no available rentals, the universe had other ideas.

We literally sent out over 80 inquiries, in Portuguese, that we found on websites along with texts to match, and only received maybe 8 to 10 replies back. Some of those replies said the apartment had already been rented, another specified that he wanted longer than a one year contract signed, and still others did not offer what we needed. 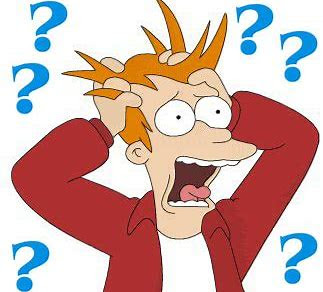 Then one day out of the blue a female real estate agent named Celia called Clyde's cell phone asking us to come into her office so she could show us what she had available to rent. At the time we were looking in towns other than where she was, but explained that when we were in her area we would be in touch. Since we are renting in the Algarve Region of the country, she was a good 4 hour drive or more from where we were, so we could not meet with her until we were closer.

Frustrated by the lack of response on rentals I had the bright idea to look for a short-term rental in Central Portugal, closer to the towns that we wanted to live in. This would give us a chance to talk to agents, contact people through ads and hopefully get to see some available rentals.

What I found was a $35 a night, four-bedroom apartment in the town of Alcobaca. Here we could cook some meals in the apartment and explore areas of interest to us. When we arrived we were greeted by two gentleman, a father and son who showed us to the house. The apartment was in the basement of a house under renovation, attached to several other houses in the same state of disarray. One man spoke good English while the older gentleman did not speak any. Once inside we were shocked and realized that we were definitely in REAL Portugal now. The kitchen is tiny with the remains of an old fireplace over the stove that hangs down so low that even I can bump my head on it. The bathroom is an adequate size and the rest of the apartment is JUST rooms with small beds in them. Because it's a basement apartment it's colder than outside each time we walk in.  But the good news about this place is that everything is new, so it's clean, and it has WIFI and free parking nearby. 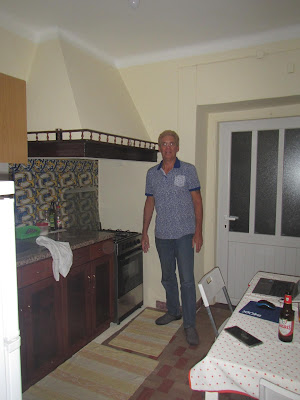 Is This Thing A Hazard Or What?
This Is The Cheap Temporary Rental Apartment


Back to the apartment hunt, our plan was to contact Celia the day after arriving here to meet with her and see if she could help us find a place to live. Clyde looked through his notes and phone and could not figure out which phone number was hers, so we could not call her. We gave up on that idea and decided to head into the town of Caldas da Rainha, since we had heard it might be a place we'd want to live.

While driving down the highway Clyde's phone rang and he handed it to me to answer. It was Celia who said, "I have been waiting to hear from you since you said you would call me when you were in this area." She said she could meet with us later that afternoon and said she would call us around 1pm when she was free. 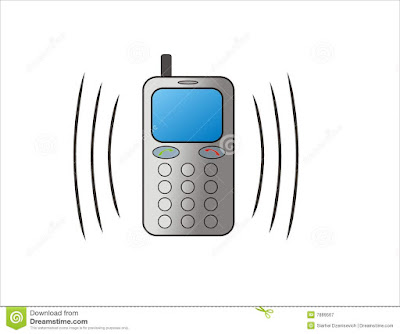 Once inside the town of Caldas da Rainha, which literally means, "queen's hot springs," we drove around admiring the small city. Just then Clyde's phone rang again and it was another gentleman offering to show us an apartment. First we said no since we had the appointment with Celia, but later called the man back to see the apartment. We found the building and waited inside the lobby until 2pm but the man never showed up. Frustrated we went back to the car to call Celia who was an hour late calling us back.

When Clyde asked Celia where her office was, coincidentally, her office was right down the street from where we were parked. It was so close that we could see it from where we were parked, so we hopped out of the car to go meet with her. Inside her office we were greeted by a young, red-haired woman who spoke good English and began telling us what she had to offer. Not an apartment but a private home in the country, about a ten minute drive from the center of Caldas da Reinha. The house is fully furnished and we could rent it for 350 euros ($400) per month. She showed us photos on her computer and we agreed to follow her in our car to see the house.

We followed her for what seemed like an eternity (only 10 minutes), down winding roads, past cornfields, lush farmland, orchards and through little villages that dripped with European charm. And finally she pulled up alongside a house that sat not far from the road.

Just then I yelled out to Clyde, "this is that house we tried to find that day!" Oh My Gosh.....maybe this IS meant to be? It's a sign! 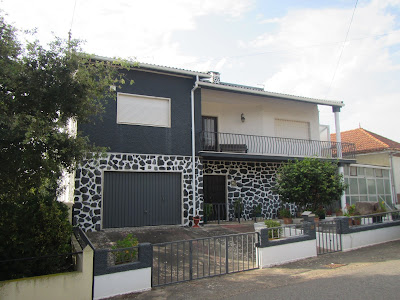 The Outside....Notice The Windows That Lead To Another House Where The Owner Stays When She Is Here 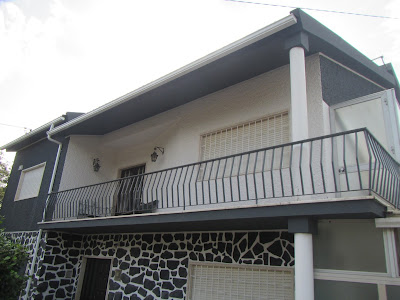 Soon after arriving in Portugal Clyde and I had to meet with our lawyer in Lisbon to work on our residency visa. Afterwards, we went out exploring an hour or so from Lisbon, since that is the area we were hoping to live. I was looking online for apartments and sending out emails in Portuguese assuming that people would call us back and we could go look at some places. Up popped a photo of a villa for rent, and since it was nearby we put the address into google maps to go find it and at least see it from the outside.

But sometimes the google maps lady leads us astray, and try as we may we could NOT find the house and finally gave up. The house featured an unusual exterior that I could not forget, so when we came to a stop in front of the same house behind Celia, I was shocked.

Most houses in Portugal are white in color with orange, tiled roofs, but this house was different. It stood out among the others in the neighborhood, with its black and white bricked façade, tiled courtyard that was accented by plants and a tree. It was ever so inviting with its cute curb appeal and looked like the type of place that had been well cared for.

And here we were about to go into this house that could be our new home! WOW!

Inside we were greeted by a staircase that sat in the middle of a spacious entryway. Celia explained, there was a garage and bedroom on the bottom floor. On the rare occasion that the homeowner, a single female who worked as a nurse in Lisbon was there, she would live in the downstairs bedroom. It offered a separate entrance from the outside along with a house attached to the main house, so we would never have to see each other. Upstairs were 3 bedrooms, one large bathroom,  a large eat-in kitchen with pantry, formal dining room and living room combination with a huge fireplace, a long balcony, corner bar for entertaining, a gorgeous tiered ceiling trimmed with crown molding. 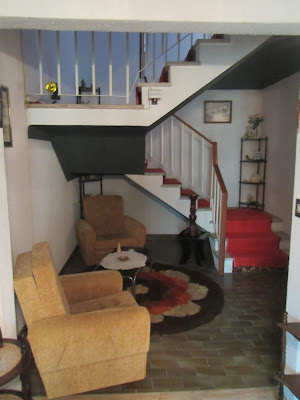 The Entryway....Red Fabric Protecting The Rug Runners On The Steps 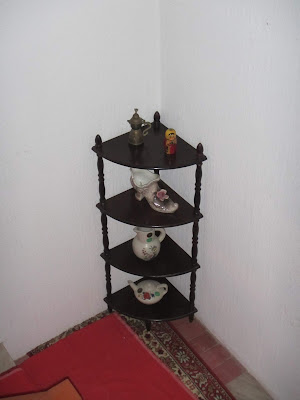 We could describe our new home as "Antiqure Elegane in an Almost New Conditions".  The furnishings were incredible and the walls were painted bright colors that coordinated with the Portuguese tile on the floors and walls. This place was truly like a museum filled with antique furnishings, decorations, and radiant elegance. And it comes complete with pots and pans, dishes, glassware, appliances and more. 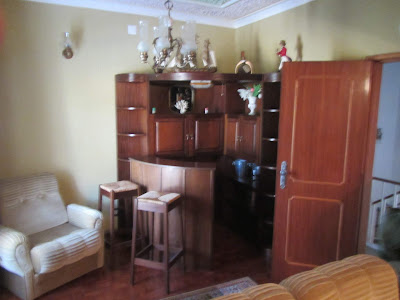 Old Time Bar In The Corner 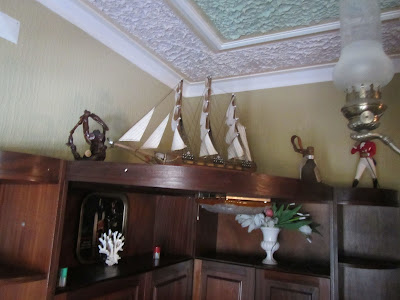 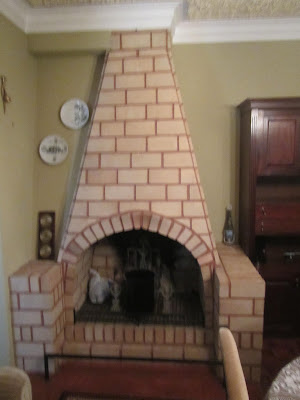 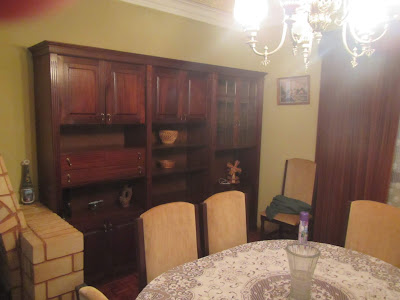 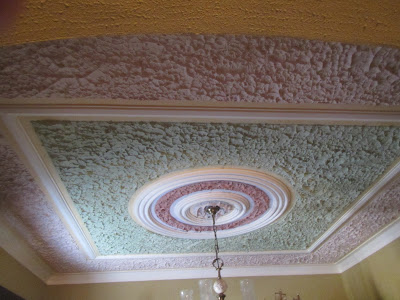 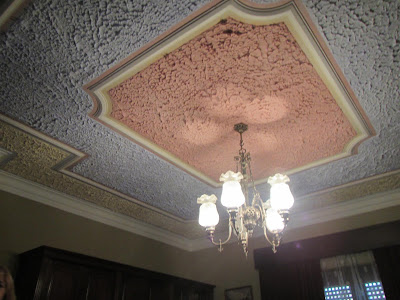 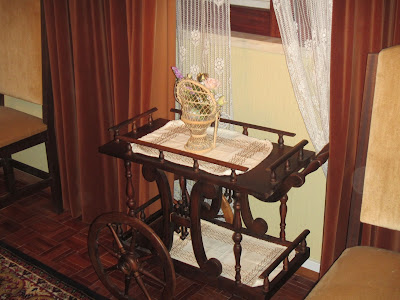 While Clyde was chatting with Celia and the caretaker I plopped down on the couch and immediately felt at home. 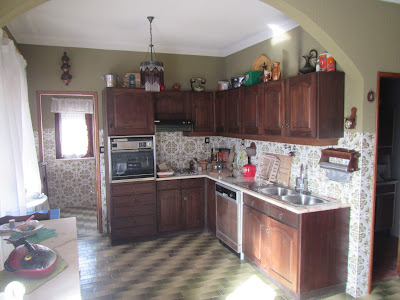 Kitchen, Laundry Room In Distance, Pantry To The Right 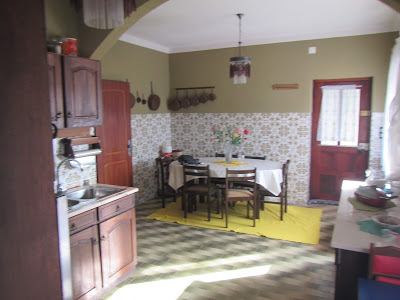 Eat In Kitchen, Door Leads Out To Yard
That Is Yellow Fabric Protecting The Area Rug Underneath


I cornered Clyde to ask what he thought and all he could say was, wow! We were amazed that we could live in this nice of a house, with so much stuff, for just 350 euros, or $400 US. We had found our new home! 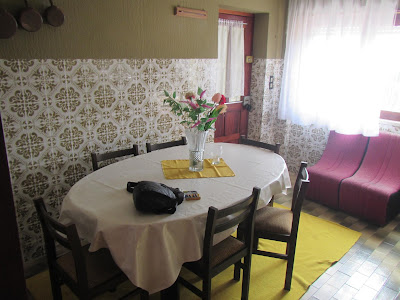 Today we met with Celia again to sign a contract to rent the house for our first year. She said the owner was delighted to hear about us and even said she would give us the WIFI code for the house, so no need to sign up for internet. We have discussed rearranging some of the furniture which we were told was just fine. Not to mention that there is a garage FULL of other furniture, decorations and plenty more stuff just in case we need something else. 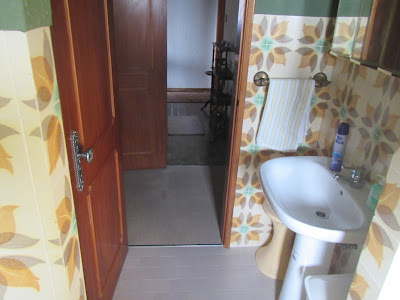 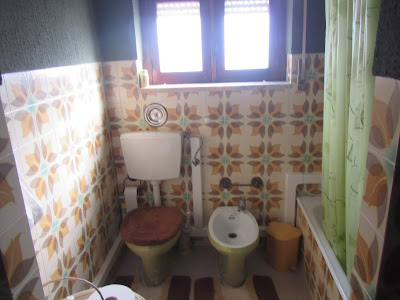 Funky Lime Green Bathroom....Lots Of Portuguese Tile
and she has a bidet!


When we first started talking about renting in Portugal we decided on a budget of 300 to 500 euros per month. While we can afford to spend more we do still want to travel and by spending less on rent and monthly expenses we will have more money available to explore this wonderful world in which we live. 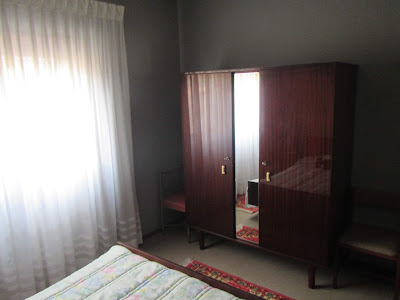 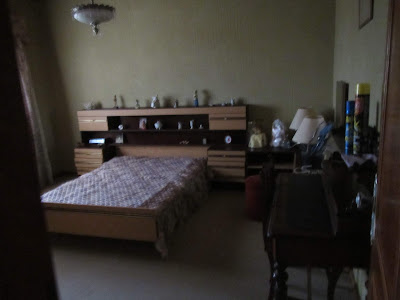 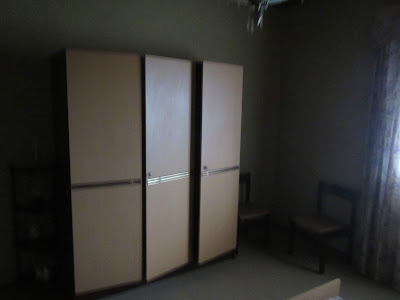 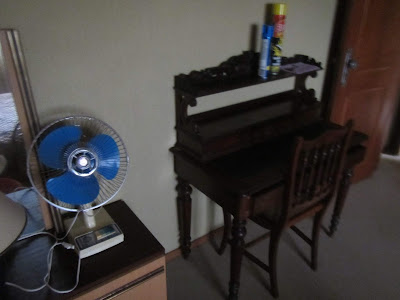 After our meeting with Celia we went to look at the house again and were even more impressed with it the second time around. 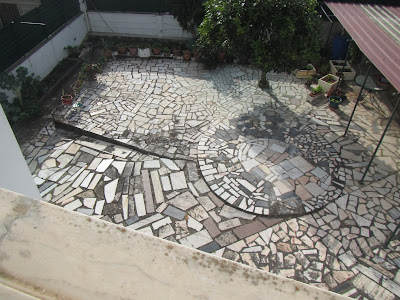 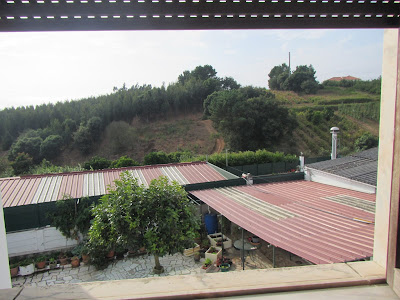 Views From The back Of the House 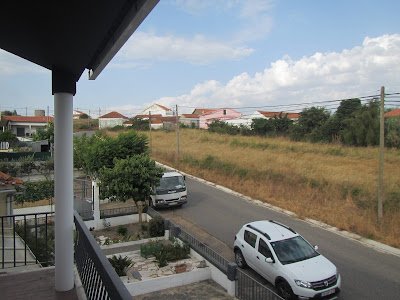 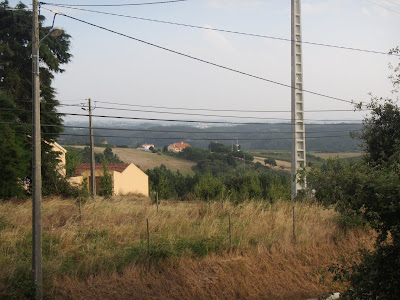 Earlier in the day we met with another American expat who lives in Caldas da Raina, only to discover there is a large expat community established there. How much fun it will be to make new friends, invite them over to our lovely new home and begin to enjoy our new life in Portugal......along the gringo trail.