Or should we say a "buenas" at the gate.  Sitting here watching tv it's 8:45 pm and we heard kids outside, nothing unusual.  Then we heard someone say "buenas" as if trying to get our attention. Clyde went out to see what they wanted.  They explained something in Spanish and he explained that he didn't understand and that we are learning Spanish.  I could hear the boys voice slowly speak one word at a time......."tenemos.... un.... actividad".....which means we have an activity, and that could only mean that they were selling something or collecting money.  They slowly explained that they were selling something for futbol, which is soccer in Panama.  Clyde came into the house to get his wallet and gave them a few bucks.  He walked back in with small plates covered with aluminum foil and said "ok, so let's see what I bought."  I started to open one and I smelled pizza. Then I looked at it and what I saw was pizza on white bread, made by some kids that we don't know.  It smelled good and we laughed about it and just had to take pictures, but wouldn't eat them. 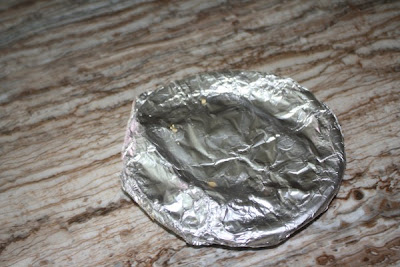 Now, what can be in this mystery package? 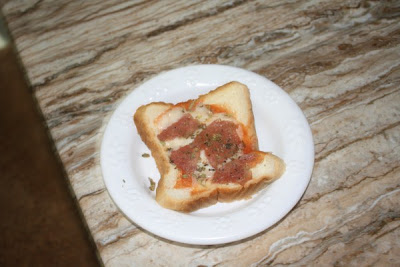 Why it's "Pizza de Pan"!
Since Panama is known as the "Crossroads to the World" or "where the world meets" we have access to products from around the world.  Since practically every product being shipped anywhere has to make it's way through the Panama Canal, we are fortunate to be able to buy stuff from all over.  As soon as I get a new product home I read the label to see where it's from. For example, yesterday I picked up some healthy cookies called "Go Ahead" that have only 49 calories per bar. They are sweetened with apple and sultana. We had to look up sultana and turns out it's a white grape that's dried similar to raisins but a larger fruit.  These cookies were made in the United Kingdom.

Clyde will be the first to announce to everyone that he doesn't color his hair.  At the age of 57 years old he still has a thick head of curly, luscious, brown locks for me to run my fingers through.  He may not be too happy with me for revealing this bit of information, but I color his hair.  He makes me do it so he can tell people that he doesn't color his hair.  Back in the states we were using a product called "Just For Men," which is a 5 minute hair color that gently washes away in six weeks.  Here we found a product called "Strategy" and it's from Buenes Aires, Argentina.  These directions were in English, Spanish and some other languages too. Clyde has no reason to complain about my shopping splurges on $2.00 shoes since he gets his hair cut for free by me, and I'm usually naked too so that my clothes don't get dirty.  I was a licensed hairdresser years ago and his is the only head that I tangle with these days.
When he was working in the fire department the guys knew that his hair was colored and when they'd see too much gray his Captain would tell him "Clyde, go home and color your hair."

Both of us still suffering from queasy stomachs, diarrhea and gas we've been eating light and taking it easy.  Today I read yet another article on the benefits of "aqua de pipa" (coconut water) one being that it will help diarrhea and upset stomach.  So we headed into La Chorrera to pick up a few fresh, green coconuts full of this medicinal like fluid.  We stop there so often that the man was happy to see Clyde, shook his hand and asked how he's been.  Home we headed sucking on straws, sipping this "dew from the heavens" as the Hawaiian's call it.  We don't know if it will really help our upset stomachs, but for only $1.20 for two, it's full of great stuff.  Here's a link to the article for anyone interested in reading it.


The Benifits of drinking Coconut Water﻿
Tomorrow our trails head out to a brand new resort that has a nice gym and outdoor pool.  They are selling gym memberships which would give us use of the pool too.  Hopefully we'll get some sunshine so I can enter into my "happy place" which is baking in the hot sun.  After all like they say, if mama gringa ain't happy, ain't nobody happy.  Happy trails......under the sun......along the gringo trail.
at November 27, 2011