After our zip-line we headed out to find a patch of trees called "Arboles Cuadrados" or square trees.  We paid our $2.00 each and walked along the trail which indicated that the trees were 800 meters ahead.  Since we're not too good at metric figures, we had no idea what that meant. Turns out that 800 meters is about a half mile and that of course was all up hill, but it seemed like more since we had already been hiking all morning.  Fortunately for us, the trees had a big sign in front of them that said "square trees" or we would have missed them.  The first one was huge and very old with winding, roots at the bottom which made it difficult to see the squareness.  Then we noticed a smaller one which I got closer to and realized that yes indeed, the trunk had four flat sides making it square instead of round. 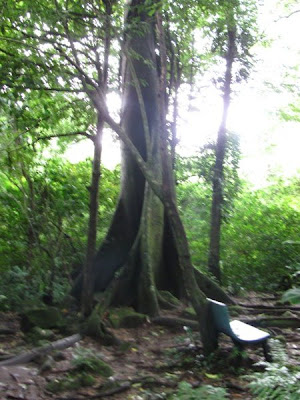 What makes these trees square instead of round?  Apparently, no one really knows but this part of Panama and Costa Rica are the only two places in the world where square trees grow.  They are members of the Cottonwood family and researchers believe that the shape is probably due to some unknown local factor.  When researchers studied these trees they found that even the tree rings which indicate the age of the tree are also square. 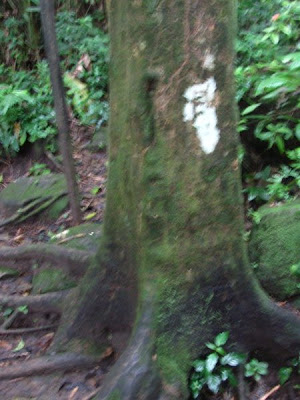 You can see the "squareness" on this one
Next stop was to find a rock the size of a truck which was said to have ancient petroglyphs on it, and goes by the name "Piedra Pintada."  Since it was getting late and we were tired, Clyde stopped to ask directions from a few locals.  An old Panamanian man pointed and as soon as we got out of the car, a little boy ran over to help us out further.  The young boy named Michael, was maybe 8 or 9 years old and proceeded to point and explain that he would take us to the rock.  Of course he spoke only Spanish, so we didn't quite understand everything that he was saying.  We practically had to run to keep up with him and since the path was mostly uphill, it gave us even more exercise for the day.  After he took us to the rock Michael wanted us to keep following him to yet another waterfall. But it was getting dark and looked like rain, so we thanked him, took a photo and gave him a tip for his efforts and finally he ran back home.  Michael was cute but insistent that he would stay with us and show us more stuff.  For a minute I thought we'd suddenly adopted a Panamanian boy, and I breathed a sigh of relief when he left us alone. Notice that the boy is wearing crocs, or the generic cheaper version sold here for about $1.99.  At first I wondered why plastic shoes were so common in Panama, but then the light bulb came on in my head. Since most locals walk or take buses and it rains alot here, plastic or rubber shoes make sense here. 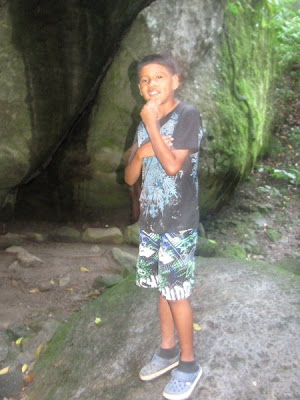 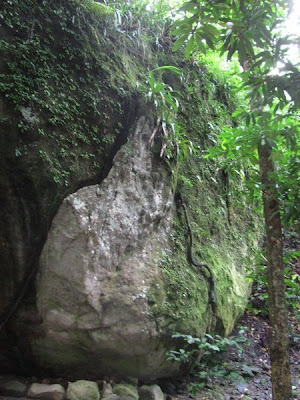 This is one big rock! 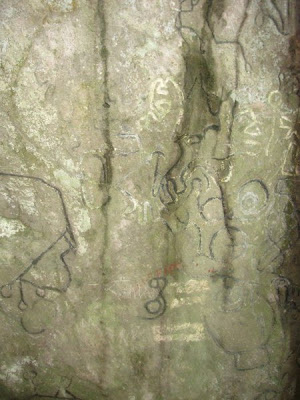 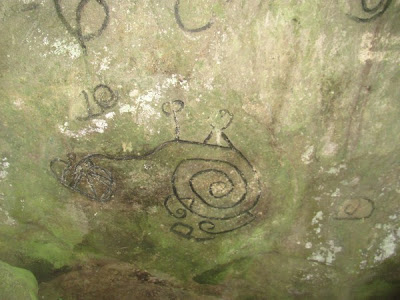 From there we drove back to the Hotel Campestre, a lovely alpine lodge overlooking the mountains.  The room was nicely decorated with tile, stone and rustic touches although the accommodations were basic.  The young man that showed us the room explained that it came with no air conditioning and no television which was ok with us.  Since El Valle is situated in the mountains the night cooled off and we actually slept with the windows closed, under layers of blankets.   Oh by the way, with our Pensionado Discount we paid $49 for the room. A view from our Porch 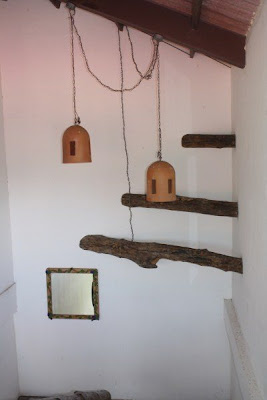 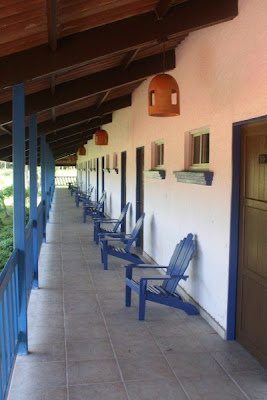 In front of our room 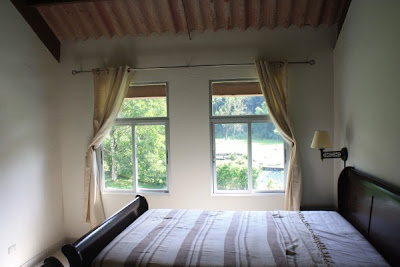 View of our room
After breakfast we took off to see what other trouble we could find, or should I say might find us. Panama has LOTS of cops everywhere, and they look like military and carry big rifles.  We see them on horseback, motorcycle, in cars, on foot and everywhere else you can imagine.  They stop cars all the time doing random license and registration checks and sometimes we see them pointing radar guns. But so far we've never seen a cop stop anyone other than at a random check.......until NOW.

Clyde was lost and made an "illegal" u-turn or "retorno" as they're called here.  Just then we noticed a motorcycle cop along side our car.  He pointed a finger at us and pointed to the side of the road, as if to say "pull over."  Once stopped, the cop came over and shaking his finger at Clyde he told him that he made an illegal turn. Clyde already knew what he had done wrong and playing the "I speak no Spanish card" he said, "oh sorry officer."  The cop asked "tu hablas Espanol?"  to which Clyde replied "un pequeno."  The cop looked dumb founded like he didn't know how to handle this since he spoke no English.  He tried to explain in Spanish that he would have to give us a ticket just like in the U.S.  Clyde nodded ok. The cop then went on to say the ticket would be $26.00 and began to explain how and where to pay it.  Once we told him that we lived in Capira he explained that we could pay it in La Chorrera, since that's close to home.  After a few minutes of struggling to make us understand, he said "ok,  no ticket today."  Clyde thanked him and off we went.  It was so funny since the officer kept shaking his finger telling us we were wrong, yet he didn't quite know how to handle the conversation and just gave up.  At least now we know what works, and if playing dumb doesn't work, the tickets here are cheap  and don't go against your license like in the states.

To sum it up, there really are square trees in Panama and no we were not under the influence of Panamanian rum at the time we saw them.  And although it may sound easy to find a boulder the size of a truck, things are not always that simple in Panama.  And I really don't think we adopted a Panamanian kid since Clyde is all the kid I can handle.  After we got away without a ticket Clyde asked me if I showed a little cleavage or more to the cop, behind his back.  He doesn't need to know......but remember, whatever happens in Panama, stays in Panama!  Until next time, we'll try to stay out of trouble, although that's what makes life interesting.... along the gringo trail.
at November 22, 2011