Another "first" for Panama happened today at a local dental clinic.  We made appointments to have our teeth cleaned but had no idea what to expect.  Clinica Dental Las Americas is located in the back half of the medical clinic, across from the grocery store that we frequent.
Upon entering there sat a desk to the right, and a half wall to the left with two dental chairs behind it, each separated by another half wall.  I was greeted by a young, very cute dentist who introduced himself as Dr. Luis as he shook my hand.  He said that since no one can pronounce his last name which is Candanedo he uses his first. After explaining that his English was not too good, he proceeded to speak mostly English during the office visit.
Dr. Luis proceeded to examine my mouth, then he himself did the cleaning, polishing and fluoride treatment.  At the end it was him who did all of the charting, including our names, medical history and appointment cards for the next visit.  Also on the appointment card he wrote down his personal cell phone number in case we ever need him after hours.  We had heard that doctor's here give patients their phone numbers, and now we know it's true.  The cost for all of this was $25.00 less our pensionado discounts which brought it down to $22.00 each.  This included a cleaning, the dental exam and a fluoride treatment.  In the U.S. I believe we paid that much AFTER the insurance paid their portion just for the cleaning.

On the way home after shopping and lunch we stopped at the local produce stands as usual.  Clyde wanted to try "Aqua de Pipa" or fresh coconut water right out of the coconut.  For less than 50 cents the vendor took the coconut out of a cooler.  With a machete he chopped off the top of the coconut, then used the point of the machete to carve out a little hole in the center.  He poked a straw into the hole and handed it to us to drink.  One of the many health benefits of living in Panama is the fresh coconut water that we can find just about everywhere. 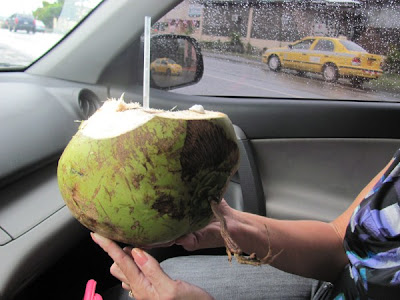 Terry, holding the "Pipa Frio"
Coconut water (or agua de pipa) is the clear liquid from a young, green coconut and is not the same as coconut milk.  When a coconut is young it has very little meat and therefore is full of liquid. As the coconut matures the liquid is gradually replaced by white coconut meat. 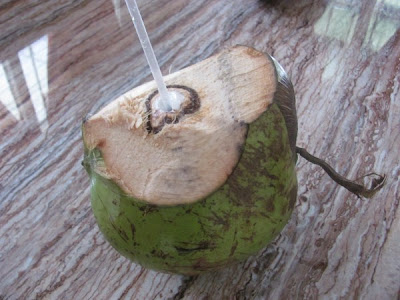 ﻿Perhaps the healthiest drink in the world?
Back in Texas when the Corpus Christi Athletic Club was my second home, my gym buddies talked of the benefits of coconut water.  It has more electrolytes and nutrients than those bottled sports drinks, more potassium than a banana, is low in calories, has no fat, no sugar and no salt.  In some countries coconut water is used in place of intravenous fluids or saline solution in hospitals.  It's so full of nutrients that it's even used to feed newborns when the mother's can't nurse.  While sitting in a roadside cafe in Panama City one day, I noticed a buff, male dressed in gym clothes walking by sipping water from a green coconut.  He was either on his way to or from the gym taking in some good liquids to supplement his healthy lifestyle. 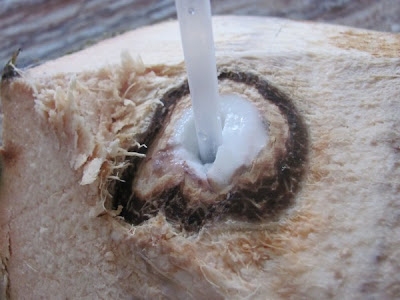 A better look at the hole for the straw
We shop at several different grocery stores here in La Chorrera, Panama.  During one visit I suggested that Clyde snap some photos of things that were different from the U.S. counterparts.  Once a salesperson noticed us taking pictures and turned us into management our photo snapping came to a halt at least at that store. 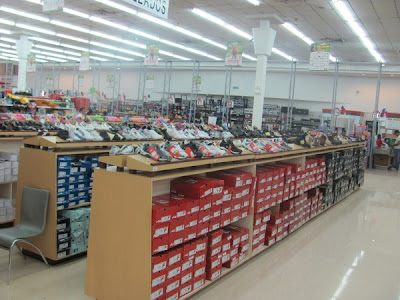 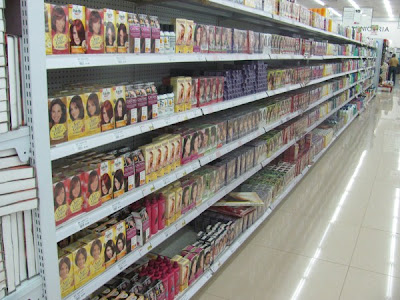 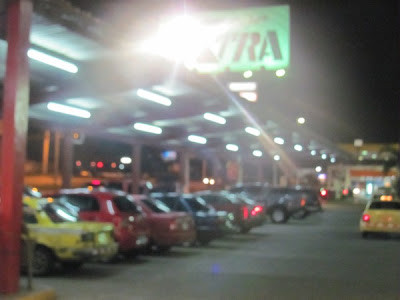 Covered Parking at the Grocery Store
Did we mention that it rains a lot here? 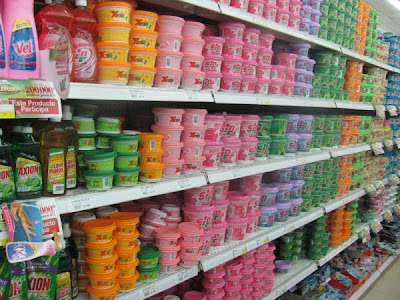 Dish Soap sold in Panama
It sits by the sink and is solid,
you rub your sponge on it and wash!
Security is taken VERY seriously here in Panama!  There are police and armed guards everywhere as a deterrent. Perhaps if Wal-Mart people greeters in the U.S. carried rifles or machine guns there would be less theft in the stores.  Upon entering every store in Panama we notice a uniformed guard wearing a bullet proof vest, holding a large rifle or with a pistol on his side.  Packages cannot be carried from one store into another.  In the malls there are "lockers" to hold packages.  Since many people here travel by foot, bus or taxi even parking lots have areas to hold packages. 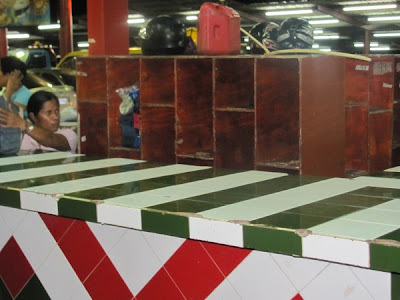 No Packages allowed in this store, all must be checked in here.
Since the closest gym is about 20 minutes away, old and dirty I decided to work out at the house.  We brought an old bowflex machine from the states, and added some free weights, an exercise ball and mat.  While at the store paying form some 15 and 20 pound weights, the little cashier struggled to pick them up to bag them. I told her they were for me and flexed my arm to show her my muscles.  She was impressed and I jokingly suggested that she get some weights.  Our newest addition is a spin bike that I enjoyed for the first time yesterday.  This room was set up to be a den, but has turned into my gym here in Capira, Panamá....along the gringo trail. 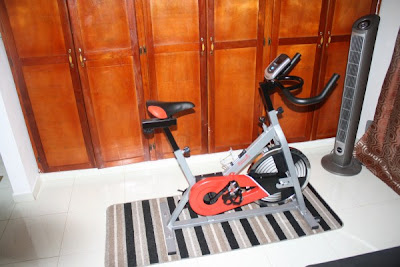 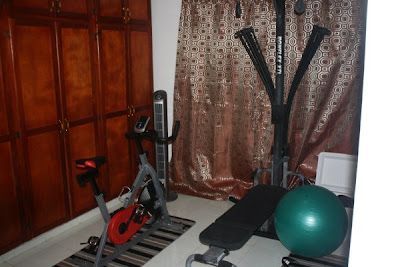 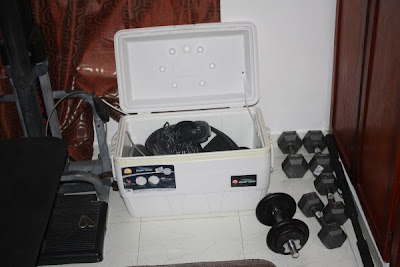