Fourth Of July In Panamá....

Remembering the stars and stripes while partying the night away was how we spent our first July 4th in Panamá.  Although the country doesn't celebrate July 4th, the locals are more than happy to take our money and provide us with a place to party.  Mamma Mia's Restaurant in San Carlos hosted the event which included two for one drinks and pizza specials, and live music by the band Invicta and fireworks.

One expat woman boasted about the great mojitos that the restaurant makes and immediately ordered one.  The waiter came back to apologize that they didn't have any mint and therefore could not make a mojito.  So the women ordered something else and the waiter returned once again to say that the bartender didn't know how to make that drink because she had left her book at home.  I believe that in the US bartenders must remember how to mix drinks and are tested prior being allowed to work.  So the woman explained to the owner of the restaurant in English who explained to the bartender how to make the drink.  Apparently the girl had only been tending bar for one month and with the massive crowd for the holiday, was going crazy.  When our friends David and Stephanie arrived later on, Stephanie offered to help and jumped behind the bar to lend a hand, as she'd worked as a bartender before. 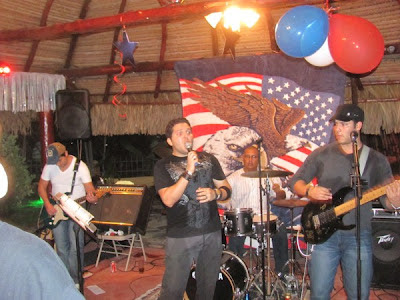 Invicta
Americans and Canadians too all packed the house until it was standing room only.  The rock band performed most of the songs in English, and we showed our appreciation by dancing among our expat peers.  Dressed in my red, white and blue flag bikini with sheer, white gauze pants over the dark blue star clad bottom drew much attention.  When we first started to dance the restaurant owner snapped a picture and asked if he could put it on their face book page. Cameras were snapping all over and one women asked me to pose with her man and then brought his friend over too. 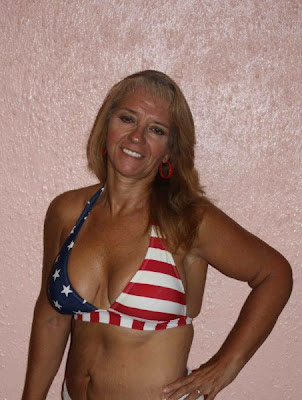 Ready to celebrate the fourth!
Fireworks lit up the night sky in back of the restaurant, and as we stood and watched we felt a shower of residue sprinkle over our bodies creating a bit of a tingle. What fun times we're having and in the middle of the week, which is just fine since we don't have to get up for work anymore.  If we knew retirement would be this much fun, we would have done it much sooner. 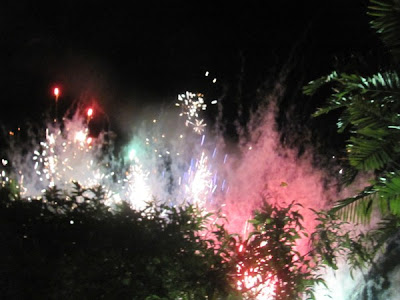 The camera captures some wonderful colors 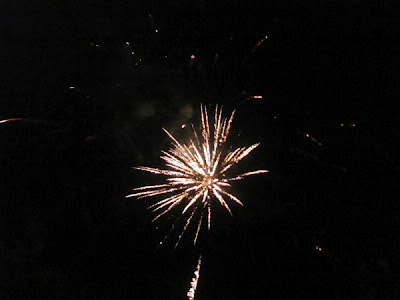 right above our heads 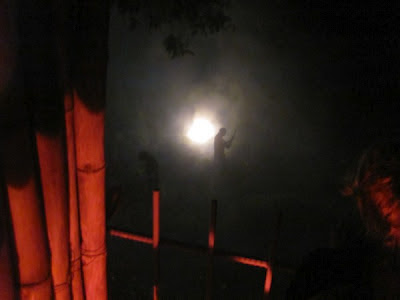 eerie photo of young man setting off the fireworks
Earlier in the week while socializing we made some new friends that mentioned they have all the US television stations through Direct TV.  Since this was the first time we heard that was available here, we asked more and they emailed us the name of their contact person. He was quick to reply and yesterday the installers showed up around 11am.  In typical Panamanian fashion, they had with them a small ladder, not tall enough to reach the roof.  How did they plan to get up onto the roof to install the dish?  Clyde let them use our ladder and in a few hours the installation was complete.  After they left the TV was on and for the first time in almost a year, I heard the sounds of an English speaking talk show.  Wow, we have mindless TV once again, and all for only $47 a month.  Apparently this Direct TV comes out of Puerto Rico so there's still plenty of stations in Spanish for when we want to work on that too. But we now have all the US networks along with many other stations we'll probably never watch but at least they're available.

Today we trekked into Panama City to meet with the previous owner of our house so he could give us all of the original documents and deeds on this house. Once back in the car Clyde glanced through the paperwork to discover that the street on the side of the house is called Calle Celaje, which is the name of our neighborhood.  And the street in front of the house is called Calle Sin Nombre, which translates to "street with no name."  And we thought Panamá didn't have street names, but now we know our street name is something so simple.

While chatting over coffee about the fruits growing on the property, Dr. Arellano solved the mystery of this strange, brownish, fuzzy fruit that appeared on one of the trees a few months back.  He said it's called a "nispero" and ripens to a very sweet, delicious fruit.  He said the tree it grows on is called a "sapodilla" and is very rare.  So next time the tree bears fruit we'll be sure to try some.  We also asked him to clear up the myth that Panamanians think that mangoes are poor mans food, and they refuse to eat them.  Being a well-to-do man in a powerful position as Chancellor of a medical school, he said he loves mangoes and eats them all the time, and so does his family.

Before leaving the city we stopped at a jewelery store that was re-setting the diamond in my ring, and cutting of the gold speed bumps that had been cutting into my finger.  When I tried it on I realized that it also needed to be resized since the humidity here makes my fingers swell.  Imagine moving to the tropics and now my ring doesn't fit, even though I recently lost ten pounds.
As another busy week comes to an end we realize that retirement is that time of life when we stop making money and start making memories.  And memories are what we're making here in Panamá, as proud Americans....along the gringo trail.
at July 05, 2012