Since I began this blog we've opened up our hearts and lives to the world with the joyous, sad and most mundane happenings.  As a child I remember feeling like I'd explode if I didn't write down my thoughts as they came up.  It was my way of self expression throughout my years of growing up. So today in light of some tragic news I just had to write about it to keep my head from popping off.

Last night my Mom lost her battle with lung cancer, and passed away peacefully in a hospital in New Jersey.  Born Theresa Balcer in 1930, she was the only girl in a family of four brothers.  Growing up in downtown Jersey City, NJ she learned to speak Polish at an early age while helping her Mom tend to the care of her younger brothers.

During her first marriage to Joseph Michaels she was blessed with two children.  Maryann was the first born, then a son to be named after his father Joseph.  Tragically her husband died and she was widowed at a young age, left with two small children.  Obviously I don't know much about this relationship since I wasn't around yet.

She married Robert Haber and gave birth to another daughter, Theresa Roberta Haber.  They thought they were being clever with the name being a combination of both mother and father's, but of course I always hated it.  Since Dad wasn't much for travel we became the first family in the neighborhood to have an inground swimming pool.  They taught us all to swim at an early age which led Joe and I to pursue competitive swimming in school.  They both worked hard to give us kids the best of everything, although being the youngest I think I was blessed with a bit more.  After I graduated from high school they decided to move to Florida but Dad passed away while they were in the process.  I was just 19 at the time.  Mom had always hated cold temperatures and proceeded with the move alone, which changed the course of her life. After selling our childhood home in New Jersey she moved to Spring Hill, Florida. Since Dad wasn't much on change he really would have rathered stay in NJ, and I'd always joked that he died to get out of moving to Florida.

Soon after she settled into life in Florida she met Clifford Cox, who had relocated from Maine.  She had to rent a house while her home was being built and Cliff moved into the rental after she did.  Due to a mixup over him getting her electric bill in the mail, was his excuse to knock on her door.  They married and spent half the year in Florida and half the year in Maine.  The cottage on Grand Lake in Maine was gorgeous but Mom hated leaving the warmth of her Florida home.  Cliff loved to travel and Mom told stories of him picking her up from her morning walk and wisking her away.  She'd tell him, "but I have to stop home and get clothes," to which he'd say "whatever you need we'll buy along the way" and that's what they did.  They spent many years traveling the country and having a blast, but Cliff died and she was alone again.

Being the fitness, and health nut that Mom was, she faithfully walked six miles every morning. One day she took a different route home and saw a tall, good looking, gentleman watering his front yard.  She stopped to chat and the rest was history.  Her and Bernard Mulligan married and she sold her house and moved into his.  Although Bernie was a homebody, she convinced him to travel and they went on many cruises.  He was content staying at home with his homing pigeons that he raced on weekends. Bernie passed away too leaving Mom alone again. 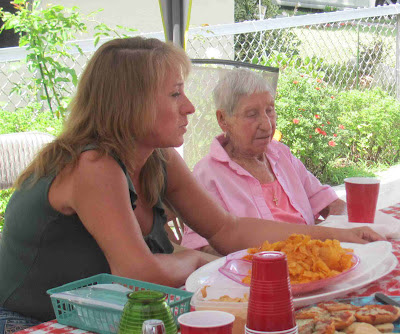 Mom's 82nd Birthday in July 2012
I remember Mom telling me a story about a fortune teller who many years ago told her she would marry four times.  She thought this sounded crazy but it turned out to be true.  She was fortunate enough to be able to retire at age 50 and travel. Yet when I announced to her that I was retiring at age 51 and moving to Panamá her first response was "you're too young to retire."  After reminding her that she did something similar she agreed and said "life is too short, so enjoy it while you can." 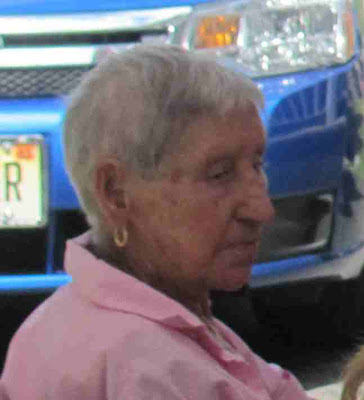 Mom this past July
﻿
Perhaps Mom gave me her same name expecting me to grow up and be like her, which is not always a good thing.  When people are too much alike they tend to butt heads and that's we did.  But like Mom I grew up with a love for health and fitness, enjoy travel, cleanliness, and sunshine.  Both stubborn, feisty, and outspoken with a love for life and people.  She instilled in me the dislike of anything not clean, or disorderly and to this day I'm almost obcessive about it. 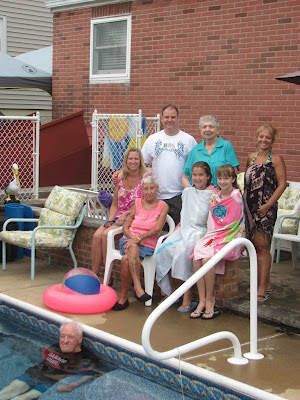 ﻿
From left to right my cousin Kevin, Aunt Charlotte, me...in front Kevin's wife Dawn, Mom and Dawn's kids...in the pool is Uncle Joe.  Taken at my sister Maryann's house in NJ
The doors of Heaven opened wide to accept Mom in, as she was welcomed by those that went before her.  Her only son Joe is anxiously awaiting her arrival along with her parents and four husbands.  It's with great sadness and a heavy heart that I write these words.  She will be dearly missed by all that knew and loved her.  We were fortunate to have recently visited with her in New Jersey for her 82nd birthday in July.  She always told us kids, "if you want to see me come while I'm alive, not after I'm dead."  At last she's painfree and cancer free enjoying her new existence wherever it is that we go after we leave this life.  We all have our own beliefs on this subject, but I like to think she's gone to her happy place, lying in the sun, basking in the warmth of loved ones.  She had a great life full of fun and adventure.  Let's celebrate her life eventhough we'll miss her physical presence and know that she's looking down joining us in spirit....along the gringo trail. 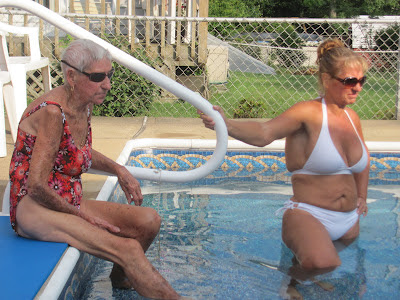