Today was a good day in Panamá!  Since we've lived here one year now it was time to renew our car registration and have the car inspected.  Since we had absolutely no idea where to have either done, we enlisted the help of a friend.  Our good friend Phil seems to either have a photographic memory or writes everything down as he does it.  He gave Clyde a detailed list of where to go, how to find the place and what to bring.  With a folder of paperwork in hand full of necessary documents, off we went on our 90 minute drive into Panama City.

Our first stop was a place called Auto-K for the inspection.  Phil suggested we ask for an Asian women named Alicia that speaks English.  She was sweet and very helpful and made the process painless.  Clyde watched the car as the mechanic drove it near the building, and parked it on a certain spot.  He pointed out a camera to Clyde that was connected to a computer screen.  After taking a picture he moved the car a bit for a different angle, and snapped a few more photos and the inspection was complete.  When we were buying the car last year Luis, the salesman happened to mention they did yearly inspections here to which I said "really?....do they inspect the horn to make sure it works since that's the only think you Panamanians seem to care about?"  He didn't get the joke but cars here are driven without brake lights, without head lights, without bumpers, doors etc.  And many have large clouds of black smoke coming out of their exhaust pipes choking the driver in the car behind them. 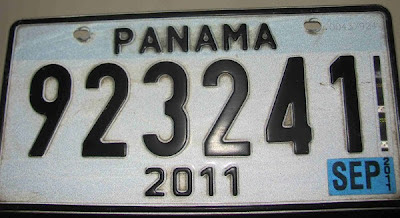 There goes the old license plate!
﻿
Now back to my story of today's journey.  Next stop was to get our new license plates at one of the seven offices in the city.  Which office we had to use depended on the first two numbers on our license plate.  According to the numbers we had to use the office in the Hatillo Building.  Since this is one of the busier offices with long lines, Phil suggested that we pay for the plates at the office in Balboa first then pick up the plates at the other office.  So after making our way through traffic in Balboa, it took only a few minutes to pay our $29 and then off we went to to the other office to wait in line.  After finding a parking spot and finding which building to go into, we were amazed that the lines were not too long and we escaped in a relatively short amount of time.   Believe me, if we would have done ALL the paperwork here we would have been there for hours! 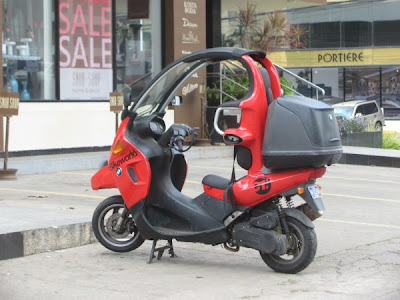 Spotted this scooter made for the rains of Panama!
Really don't see too many on the road.
It was parked in front of a store called "The Snob Shop."
﻿
Since it was around noon we stopped for lunch at a Mexican Restaurant then headed over toward Albrook Mall to find the Sertracen building to renew our drivers licenses.  Because they had our information on record from last year, we went through the line quickly.  After registering we were asked a few questions, then moved to another station for an eye exam, then had to take a simple hearing test in another room.  Last year this whole process was terrifying to say the least!  It was my first experience of being one on one with someone that spoke NO English while they were asking me questions that I had to answer.  This year it was SO much easier, although I was still nervous.  During the eye exam when she asked me to read line "cinco" for a few seconds my nerves got the best of me and I had no idea what number that was.  I read line five like I was supposed to then got sidetracked and read line seven.  She switched to colors and I managed to remember how to say those in Spanish and we were done.  She was supposed to make me identify a few traffic signs but I must have made her so confused that she gave up and sent me to the next person.  Then the next girl explained how to take the hearing test in Spanish to which I asked a few questions, before I understood what she was telling me.  From there I had to pay my $40 at one window and then sit and wait for the completed license to be handed to me from another window.  So this process is now complete for another four years.

With good directions in hand and someone who knows his way around Panama City behind the wheel of the car, we completed all the above tasks in about four hours once we reached the city.  This even included stopping for a leisurely lunch along the way.

As the sun goes down on yet another day I take notice of bats flying by outside the window.  Eagerly chomping up zillions of bugs they're a welcomed friend as are the geckos we share our home with.  Frogs loudly sing a melodic symphony in the swamp nearby as geckos chirp loudly announcing their presence for the evening.  As the daunting tasks of today are behind us we look forward to the next task that comes our way here in Panamá....along the gringo trail. 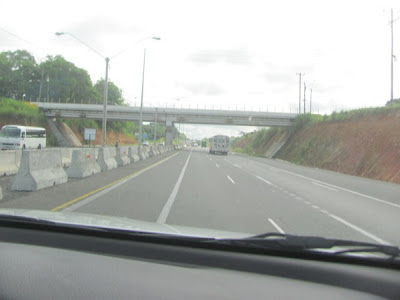 The Highway on the way to Panama City
they are expanding two lanes into three
but in the meantime, what the hell lines are we supposed to use? 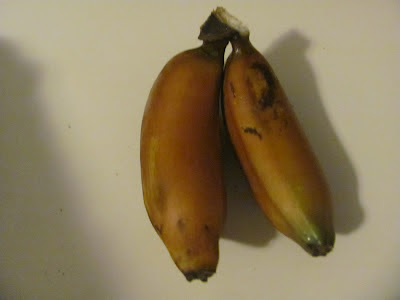 These are some Red Bananas (guineos rojos)
that our Phil brought us down from his fruit farm
at September 05, 2012