Sometimes I just have nothing to say here, but then this is Pamaná and all I have to do is wait a few hours.  Sitting at home tonight around 8 pm with nothing to watch on tv, we heard the sound of drums in the distance.  Not unusual we thought since many of the local boys play drums in their school bands, so someone was practicing.  Then we heard more drums, then other instruments, next music, and singing.  It's 9 pm in the sleepy little village of Capira, and there is a parade going on in the center square.  Why, we don't know.  There was no indication of them setting up any festivities earlier in the day when we passed through the town, and no signs announcing any events.  And now the fireworks have begun. So who knows what other entertainment we may be in for before the night is over.

Last night was much more exciting as we both sat patiently on the couch, Clyde with a camera by his side, just waiting for our new pet to arrive.  I heard a tap on the tile floor in the dining room and there he was, a five inch gecko had dropped in for a visit.  He quickly scurried up the wall and we waited for him to come out again so Clyde could take a picture. For a while now every night around 9 pm a gecko would appear on the wall over the tv.  He'd crawl up the wall and escape into a tiny hole in the corner of the ceiling tile above the tv.  Then we'd hear him chirping for his fellow gecko's outside as a way to tell them where he was hiding.  Do you think we might have a little too much free time these days? And we even named our new pet Gary the Gecko. 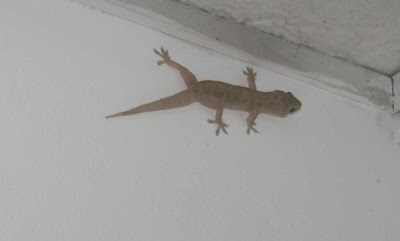 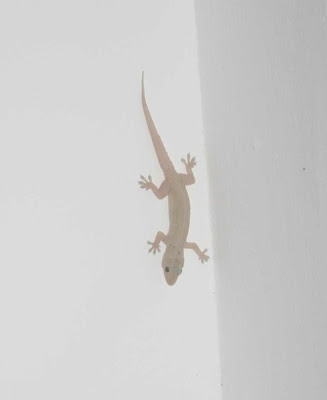 Our new Pet,
Gary the GecKo
﻿
Now before you go getting grossed out about gecko's in the house just remember that gecko's eat bugs, so having a few for a room mate is a good thing.  Speaking of bugs, Clyde was in the bathroom around 7 am today and noticed a scorpion right next to his foot.  He killed it before it had the chance to sting.  If you remember a few months ago there was a scorpion taking a nap in Clyde's shoe that was outside and he did get stung when he put his foot inside startling the little sucker.

Just a few minutes ago we had a break in power and lost our internet, but not our cable tv which are from the same provider.  These power outages only last for a second or two, but happen every few days or more.  Surge protectors are a must here in Panamá!  So right now I'm not connected so I have to keep copying this to a word document and hope that I don't lose it.

Earlier today we went exploring the back roads of who know's where and Clyde took some pictures.  On some of the roads we traveled down the locals walking in the road would look at us perplexed as if they wondered, "why is someone driving here?" and "why are there gringo's in our neighborhood?" Eventually the road would end, Clyde would have to find a way to turn around and we'd realize why no cars ventured down that road. 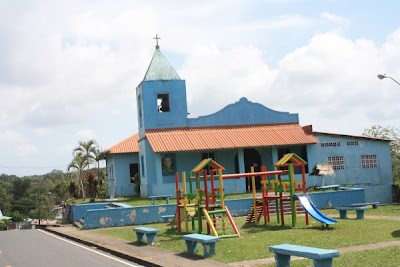 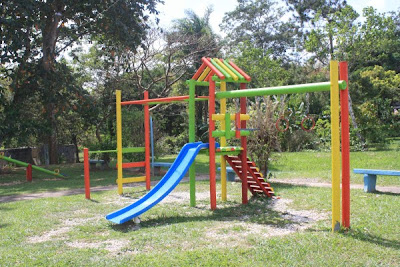 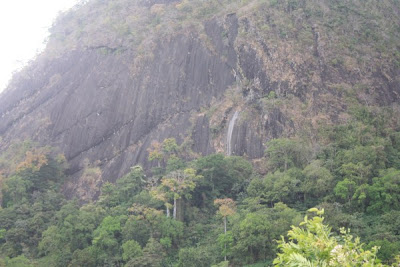 Appears to be a "dry" waterfall 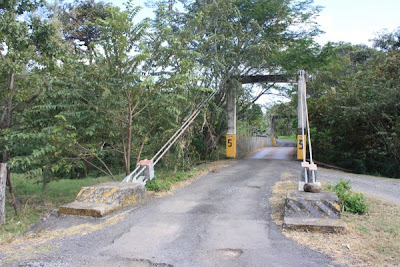 Bridge over the Chame River
Well now, the fireworks have finished, the drums are put down, all is quiet again in our tiny little town.  Crickets are chirping their choir so soft, as the gecko's are gratefully tucked in the loft.  And this darling damsel dares to delight, those that faithfully follow our flight.  Of exciting excursions exclusively elite, to expat explorers who keep on their feet.  They wishfully wander the woods like a snail and see where they'll end up next, along the gringo trail.