After spending the day at home yesterday, catching up on laundry while I worked on some writing we decided to get out of the house.  We drove into La Chorrera and stopped to buy a watermelon from a man on the side of the road.  He offered us a sample which wasn't just a little bite like in the U.S., but he cut a whole slice, cut it in half and gave it to us.   We felt too guilty to throw it away with him standing there so we stood there and ate it all, dropping the seeds in the grassy field in which we were standing.  After eating Clyde picked out a watermelon, paid the man $2.00 and off we went, sticky hands, arms and all.

Next stop was a busy, congested corner of town to see the famous "pina" man who sells nothing but fresh pineapples.  We looked over his spread of hundreds of fresh pineapples and picked out one for $1.00.  Tonight he even had some "guineos" or bananas so we bought a few of those too.  By far the best thing about Panamá for me so far, is the fresh produce sold everywhere on the side of the road cheap.  Even better would be to have our own land with mature fruit trees where we could pick fresh fruit for free every morning.  Someday, maybe we'll have land and a house here. 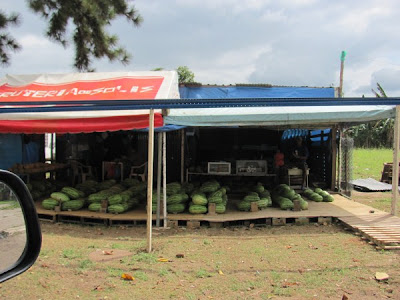 ﻿
Our friends told us about a new pizza place in La Chorrera and raved about the great food.  From the street it looked like a little hole in the wall and I almost backed out.  Once inside it opened up to a lovely bistro with harvest gold walls, an array of wine bottles displayed on one side, with black and gold fabric hanging down in a drape-like fashion from the ceiling. It was much bigger than we thought with lots of neatly manicured tables and a menu that made our mouths water.  As we looked through the assortment of pizzas on the menu, we realized how far our Spanish has come since we were able to decipher most of the ingredients.  The one we selected was topped with "hongos" mushrooms, "cebollos" onions, "chorizo" sausage, "pimiento" peppers with "salsa roja" red sauce, which is not common on pizzas here and mozzarella of course.  It was a thin crust, baked in a huge brick oven so it had a wonderful grilled taste to the crust.  As Panamanian pizzas go, this was was "perfectamente."

The restaurant seemed to be owned by a chubby, obviously gay guy who was prancing around making sure things were perfect.  The waitress was attentive and once she heard that we were learning Spanish, she said she was trying to learn English but didn't know much.  She kept coming over to chat with us in Spanish, apparently trying to give us practice time.  When she heard that we moved here from "Tejas" Texas, she said it makes her think of horses, and asked if we had any.  Clyde played the "bombero" firefighter card which always impresses people, and before long she was swooning and telling him how heroic he was.  Since the locals don't have cars she was impressed that we live in Capira, a 15 minute drive from La Chorrera and went that far to eat.  But since there's not much in Capira we have to go to La Chorrera for most everything.  After we were done eating the chef walked by, dressed in a white apron and red chef's hat and Clyde yelled "señor."  When he came over we told him that the pizza was "muy bien" very good.  The waitress yelled over to him that we were from Capira, and moved here from the U.S.  Nothing like keeping a low profile here.  Just glad we're not in the witness protection program or something because our cover would have been blown.

We made the long 15 minute drive back to our little neighborhood of 26 houses.  They had been working on the road all day yesterday, another reason we stayed close to the house since the road was all torn up.  We arrived home around 7 pm and as we drove in there was a road block of cars lined up.  We noticed our neighbors car and Clyde called him over to see what was going on.  The neighbor Christian explained that he and his wife had been stuck there for 25 minutes so far, with their newborn baby in the car.  They spread an oil mixture on the road so no one could pass until it dried.  He had no idea how much longer it would take and he appeared upset as he told the story.  He probably said some other things we missed in translation since he speaks no English.  A note on the door saying that the road would be impassable would have been nice, but then this IS Panamá and here they do things differently.

Clyde had to back the car all the way out of the street to get out of the way.  We decided to head the other way into Coronado to kill some time.  Since Clyde had been on the lookout for ice cream, we stopped at a McDonalds in Coronado and had some before heading back home.  By the time we got back the street was passable but not finished.

Today the new U.S. Consul General will be visiting the interior of the country meeting with U.S. Expats, so perhaps we should go meet him.  I admit that I really don't know what he does or why we should meet him, but it's close by in La Chorrera so maybe we will.  After all we are Americans living here and we have registered with the U.S. Embassy here, so might as well make our selves known.

Clyde and I just can't get over how perfectly, perfect the weather is here everyday! The sun is shining, the birds are chirping, the temperature is 76 and I can hear Christian's baby screaming in the background.  Perhaps mama Lidia will shove a boob in his mouth and make him happy.  I know that always works for Clyde.  By the way breastfeeding in public is very common here, and the women make no attempt to hide.  They just plop one out, and go for it.  My opinionated husband just thinks this is a wonderful thing!

Yes things are different here in Panamá.  Plopping a boob out in public as a form of feeding is ok but topless bathing is said to be illegal.  Laying on the beach naked is not allowed but prostitution is ok. Clyde backed into a parking space one day at a bank and the guard told him that was not allowed.  But driving without lights that work seems to be quite common here.  But just because things are different doesn't make them wrong.  It just makes for an everyday adventure and makes every moment interesting here along the gringo trail.
at January 11, 2012