Businesses are closed, no alcohol is to be sold and no music is to be played in honor of Martyr's Day here in Panamá.  Today commemorates the riots that took place on January 9th, 1964 over sovereignty of the Canal Zone.  The ordeal began after a Panamanian flag was torn in a struggle between  Panamanian high school students and "Zonians" over the right to fly the Panamá flag next to the U.S. flag.  Over 200 Panamanian students marched to Balboa High School in the Canal Zone with the intention of raising the Panamá flag next to the U.S. flag.  U.S. Army units became involved after the Canal Zone Police could no longer handle the riots. After three days of rioting 21 Panamanians and four U.S. soldiers were killed.  This event eventually lead to the U.S. decision to transfer control of the Panamá Canal from the U.S. to Panamá.  And in 1977 the Torrijos-Carter Treaty was signed which transferred control of the Canal back to Panamá, and a complete withdrawal of U.S. troops from Panamá. 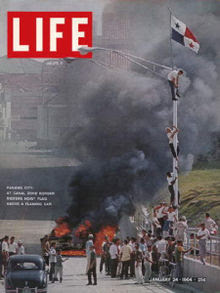 The above is an abbreviated version of what happened on this day 48 years ago today.  A link below that I found in my research will fill you in on the details of the riots.  This major piece of Panamá's history, be it right or be it wrong, has made this country what it is today.  When the U.S. had control of the Canal there was a large presence here of Americans, but they lived only in the "Canal Zone."  Today those of us that choose can proudly call this country home.  Panamá today is inhabited by Americans, Canadians and people from all over the world that come here for a better way of life.  For us the Panamanian people have been warm, accepting, friendly and welcoming. And to respect their holiday and honor their traditions we have kept quiet today, and enjoyed a relaxing holiday along with them here.... along the gringo trail.

To read the full story see article below:
http://english.turkcebilgi.com/Martyrs'+Day
at January 09, 2012