Summer in Panamá means the onset of trade winds, a welcome friend that cools off the house with warm balmy breezes.  But as the winds whip through our casita, the open doors slam causing a fright in the middle of the night.  Just the other night I woke up to the sound of the bathroom door banging against the tile.  With only one eye open I crawled out of bed, and propped the door with a large bottle of Pine Sol.  Running out heavy bottles to use as door stops,  I decided it was time to take action so I put on my creative cap to come up with ideas to make door stops.

First thing needed was some fabric from the local craft department in El Machetazo.  Once inside we picked out some patterned fabric that we liked, and asked the clerk to measure it out.  We only needed about a 1/3 of a yard for each door stop, but the women told us they only sell fabric in 1/2 yard or full yard increments.  Alrighty then 1/2 yard of each it is and she proceeded to measure each one out.  Her cutting table was cluttered with lots of stuff leaving her only a small area in which to lay out the bolt of fabric.  She laid one bolt length-wise in front of her, un-rolled some fabric, held it up in the air and grabbed Clyde's hand so he could hold it up while she cut it.  Years ago when I lived in New Hampshire I managed a craft and fabric department, so I'm no stranger to cutting fabric.  We had quilters come in a buy 1/8 of a yard of 20 different bolts of fabric and I was able to cut quick, straight pieces and get the customer out of my face fast.  But this is Panamá and they have their own way of doing things, which is never fast. After she cut a 1/2 yard of five different pieces of fabric, she had to ticket them somehow so the cashier would know what to charge us.  She pulled out a roll of masking tape and wrote the SKU # from the first bolt on the tape and stuck it on the piece of fabric.  She proceeded until the others were done the same way.  Then I needed some ribbon, also sold by the yard and she followed the same procedure with the ribbon.  As you can imagine, the whole process took a while and I left Clyde standing there while I continued to browse.

Later on as we went through the register, the cashier could not get one of the fabric SKU #'s to ring in and had to send her bagger upstairs to the fabric department for another number.  Clyde asked a supervisor if they could use the number from another one, since they were all the same price, but she told him no.  So we waited for the young boy to return from his long journey with a new number.  The cashier also didn't know how to key in 1/2 on the register, and the supervisor had to tell her to key in "cerro punto cinco" or zero point five. 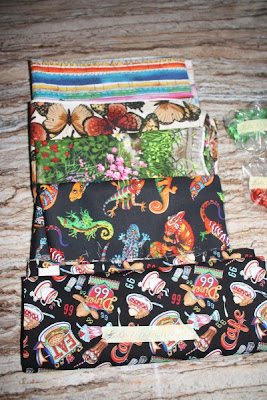 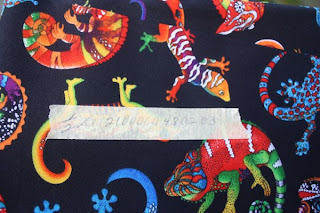 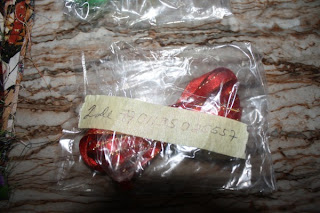 2 yards of ribbon too!
Since we're making decorative bean bag door stops, next we needed to find some cheap beans.  The ones we picked out for 69 cents a bag rang up at $1.40 each, way too much for a craft project so we left them behind and went to another store.  I wanted to make free door stops using rocks that I could paint and decorate.  But Clyde just knew that he'd kick them everytime he walked by and felt that beans wouldn't hurt his toes as much.

Now for a side note.....the grocery bag holding seven individual packages of split peas, which were cheaper than beans, was sitting on the kitchen counter.  I noticed a few bugs crawling on the floor and then realized that the bugs were coming from inside the bag. Clyde being an old grocery man from many years ago said that we would have to throw out the split peas.  He said back in his grocery days he had seen split peas get infected with bugs, then multiply to make for a messy situation.  Fortunately, we found the bugs before stuffing them into a beanbag to infest the whole house.  So tomorrow it's back to the store to buy more beans.  This time we'll buy them in bulk so we can inspect them first.  See I knew rocks would have been easier, but not on the hubs tender feet, and according to him that's what's most important. 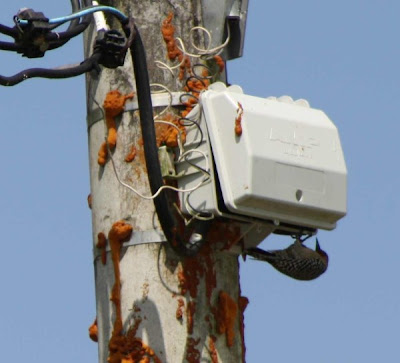 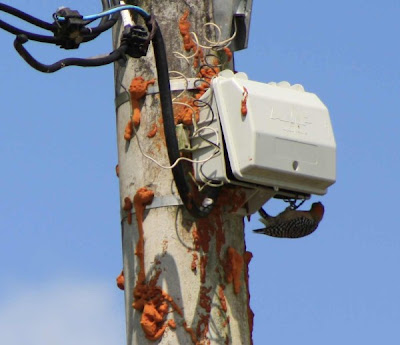 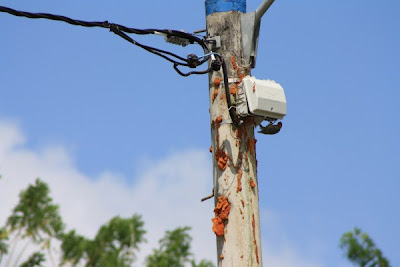 I got the little sucker!
Speaking of my dear husband Clyde, ever since we've lived here he's noticed this woodpecker tapping on a plastic box, probably a cable junction box, on a nearby pole.  Apparently, the bird never figured out that there were no bugs to be found in a box made of plastic.  For months now whenver he would be pecking away, Clyde would run to get his camera, set it up on a tripod so he could use the telescopic lens to snap a photo.  But by the time he'd get his camera the bird would be gone.  Finally, Clyde managed to capture the stupid bird pecking away at this white, plastic box.  Clyde is a happy camper and life is good today, along the gringo trail.
at January 13, 2012