As our car climbed the steep, narrow road up to Cerro Campana our new friends in the back seat still thought this was just a free ride, until we mentioned a stop at the mirador.  They joked about us being ax murderers but we assured them that when Clyde retired from the fire department he laid down his axe, since here in Panamá the use of machetes is more common.  Anyhow the mirador was high enough that one fall over the edge, with a slight push would be adequate.  And it's doubtful if anyone would ever find the bodies since they'd probably become dinner for vultures or wild dogs. 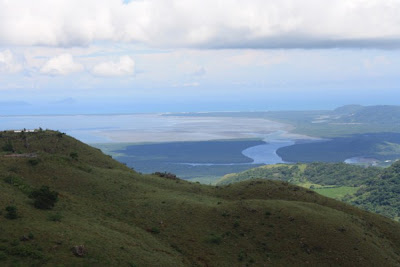 ﻿
Everyone knows that meeting people through the Internet is not safe, yet still we get contacted by folks visiting Panamá or those considering making the move here.  And no one ever knows if they return to their homeland again after meeting with us.  They believe that those friendly, good looking faces in the blog profile are really us.  And that story about Clyde being a retired firefighter who served and protected his whole career is that really true?  Perhaps my pretty face fools them, when what they don't realize is that with the tap of a finger on the keyboard, a talented writer can throw them over a cliff never to be seen again. 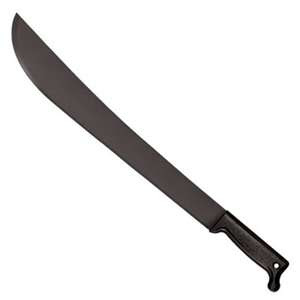 ﻿
Our victims yesterday were Richard and Lavona, he being a faithful follower of this blog from Canada.  They wanted to meet with us since they are visiting Panamá and hope to retire here someday.  We met up with them at the pool in Punta Chame and spent the day getting to know each other.  Later in the day we showed them how we live here with a peek at our house with it's $300 a month rent.  Then we took them to our favorite "parrillada" or barbecue place for a late lunch.  Clyde offered to drive them back to Santa Clara and suggested a trip up the road to Campana National Park to stop at the mirador.  That's when Lavona suggested it would be there that we killed them and the chatter turned silly about how unsafe it can be to meet people through the Internet. 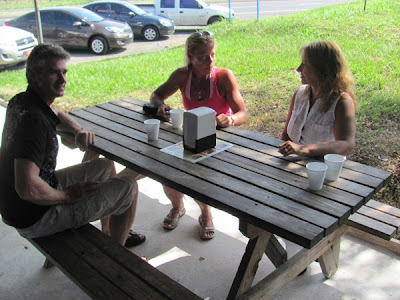 At the mirador or lookout point, Lavona climbed high onto a rock to pose for a picture. She could have easily fallen off and killed herself I thought, and realized that I'm not that daring. 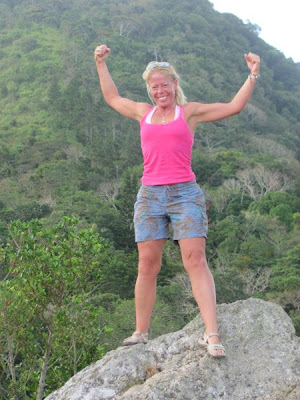 ﻿
This courageous couple taught us a few things about adventure on vacation as they are utilizing the bus system here to get around.  With no rental car, Richard and Lavona have taken a bus from Panamá City to Santa Clara, about a two hour ride.  They walk or take buses everywhere which has given them a different insight than we have on the country and it's people. 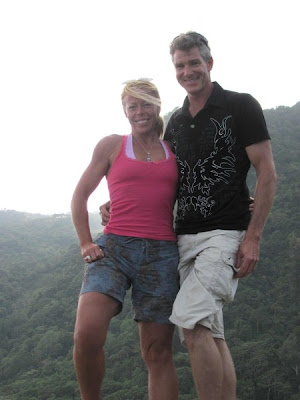 ﻿
Lavona and I share the love of bodybuilding, and have both lost the amount of weight equal to another person.  She's an adventurous risk taker while Richard admits to being the non-impulsive one that sometimes needs a nudge. We said adios to them in Coronado since they wanted to stop at a store.  Hopefully, we've made some new friends that we'll see again in the future.  Always I am grateful to followers of this blog, like Richard who encourage me to keep it going.  And meeting another "sister of iron" a hard core bodybuilder was like re-connecting to my old friends at the Corpus Christi Athletic Club back in Texas.

A few days ago the owner of the gym we use was watching me chest press and commented that my form is perfect.  He asked me how I learned to lift so well, and I told him I worked out with personal trainers over the years.  Then he made the comment that "muscle is sexy" on women and I had to agree.  Perhaps that was his way of telling me that I look good, at least in my head that's how I took it.

Men here in Panamá do commonly carry machetes to cut down brush, kill snakes or chop down bananas.  And Clyde has considered buying one, but not to kill tourists.  Hopefully, my attempt at humor in the beginning of this blog has not deterred those of you visiting to contact us.  We enjoy meeting new people and sharing our lives and story with them.  We embrace all that we will encounter, and look forward to making new friends and acquaintances, along the gringo trail.
at January 08, 2012