If you remember back in April before we moved into our house in Chame we decided to make a hole in the wall to open up the kitchen.  Actually I decided the room needed opening up, and Clyde was the one that had to figure out how to do it.  Knocking a hole through cement block is hard work, dirty, dangerous and very messy.  By the end of that day I was in tears because as the blocks came tumbling down they scratched appliances, freshly painted walls and left a trail of dust that would linger forever. 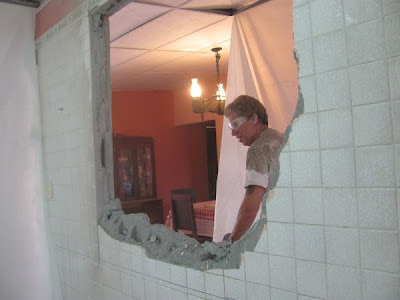 Making a mess from the kitchen side 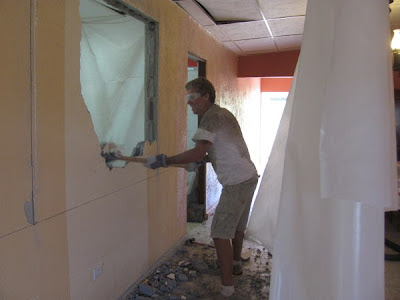 Nice and clean easy work
﻿
For the past five months the hole was opened up but still needed trimming, and also some repair work on tiles that broke in the process.  Since wood is hard to come by here, and even harder to dry properly before using it, Clyde had an idea.  One day while shopping at El Machetazo in Coronado, he went up to the third floor where they have a small hardware section.  Next to the escalator, sitting on the floor were some odd boxes of rough, brick tile and he thought this might work around the opening. After a whole day of working on it and many trips back and forth to the store later, the wall is done and looks great! 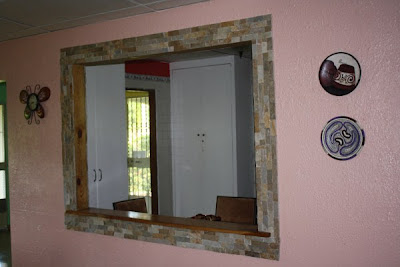 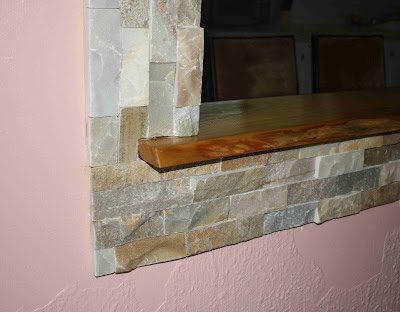 Close up of the tiles 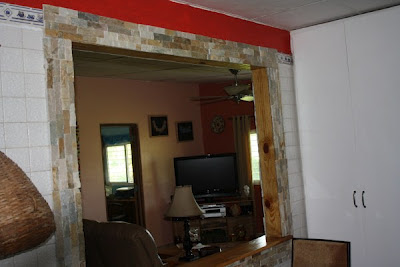 The kitchen side
﻿
When he opened up the hole some of the 30 year old white tile on the side broke, beyond where he was going to put the trim.  He ran out to buy some tile that looked similar, but could not find any four inch tile, and was told that it's not being used anymore.  So instead we had to create something out of nothing.  Clyde filled in the gaps with just any old tile that he bought, and with my trusty paintbrush I tried to make it look like the rest of the wall.  The old tile is white with gray specks sort of throughout.

And along the top of the kitchen sits a row of decorative border tile in blue and white.  Once the hole was opened some of the nearby border tile fell one day.  Apparently it was never installed properly and was bulging in the middle like it never really fit into the allotted slot.  And to make matters worse, one day about a month ago I was standing at the kitchen counter doing something, when five of the border tiles above my head came tumbling down.  They broke onto the counter and floor, nicking the already old counter top and barely missing me.  But fortunately when Clyde made the opening we saved the blue and white trim tiles and amazingly had just enough to fill in all the holes.  So the walls of the kitchen are done, now on to the next project.

Clyde is still trying to find wood to rebuild the kitchen cabinets, which he'll do as he replaces the counter top.  The problem here in Panamá is that wood is available in either cedar or teak.  But in such a moist environment it takes forever to dry, if it ever really does.  And if wood is not properly dried it cracks later on after the items are made.  Even in the states wood is usually put into a kiln to dry out since it takes so long, whereas here they let it air dry.  Wood here is purchased by the whole log and then cut up and allowed to dry, which takes months and months.

My partner in creativity and I were discussing yesterday how we both enjoy putting our own touches on our home.  We can't imagine being the type of people that pay someone else to design, build and decorate the whole house.  This old house has so much character and if the walls could talk it would have great stories to tell.  And now the two of us are adding to those stories, with our escapades and antics of making it our own.  And not to mention that we're doing all this in a foreign country where things are done differently.

But like we've said before, doing things different is not necessarily wrong, just different.  Living as two gringos in the midst of chocolate skinned people, we stand out and embrace our differences here in Panamá....along the gringo trail.
at September 15, 2012