When a man gets that primal urge to swing a hammer and tear down the old to create something new, the lady of the house just stands back and complains about the mess in silence.  She cringes to herself knowing that the mess of destruction will be worth the end result of a new kitchen...someday.  Ok so we're not exactly to that point yet, but as the lady of the house I'm cringing already.  Why do home improvements have to be so messy?  Or perhaps that's the mans' way of taking out his primal, male urges on the house, instead of on his dear wife?

Let's back up to reality and say what's really going on here at This Old House in Panamá.  But then if this really was that show Bob Villa would knock the whole house down and build a brand spanking new house in about an hour.  Unfortunately this is real life and it won't happen that quickly.  But Clyde did find a wood supplier out of Santiago that has an actual kiln to dry the wood.  Most builders here cut down a tree, make it into a log, slice it up and let it air dry for many months.  But in a rain forest environment where 70% humidity is considered to be a dry day, wood doesn't have much chance to dry out properly when left outside.

But kiln dried wood in Panamá comes at a premium price of $3.50 a board foot I believe, plus we'll have to pay extra to have it shipped here.  It'll take about a month or so to get here and Clyde was instructed by the lady of the house to buy enough wood for any future projects that might come up too, since we have plenty of room to store it.

So with the kitchen remodel on his mind, Clyde wanted to take a trip into Panama City to pick up a kitchen sink, faucet, dishwasher and anything else that we found along the way.  Thursday morning we hit the road, although not too early and as usual hit major traffic.  After being stuck in bumper to bumper, non moving traffic for about twenty to thirty minutes, Clyde decided to whip a u-turn and go the opposite way, just like many other cars were doing.  But what he didn't stop to think about is that just maybe they knew where they were going in the other direction, and he didn't.  But that never stops Clyde so off we went. 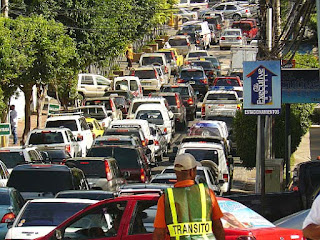 The first place to turn off led us down a long road and directly into a trash dump.  He veered onto another road that seemed to be going nowhere and decided to follow a taxi in a different direction.  After all a taxi must be taking their passenger somewhere other than the dump we thought, and that he was.  We followed the desolate road that soon became lined with junk yards brimming over with all sorts of things.  Local tiny homes reeked of  squalor and were created from scrap metal, used wood and cement blocks. Yet school children walked in the street clothed in crisp, white dress shirts and dark blue skirts or pants. Even the poorest of poor in Panamá dress in clean, neat clothing regardless of how they live and their children always reflect that pride. 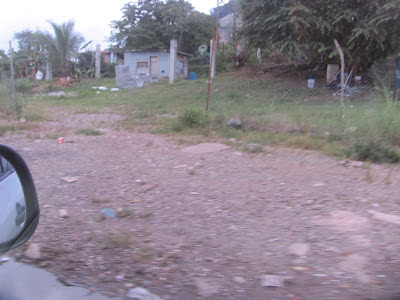 Eventually the road came out to somewhere we recognized and we made our way to the stores.  At Casa de Materiales we found a square, bowl sink for just $66 each, so we bought two for the master bath.   The master bath coincidentally is the bath that I use and Clyde uses another one, so I guess once it's redone I'll have my choice of two sinks to use.  Whenever we watch one of those house shows on HGTV the potential buyer is always pleased when the master bath has double sinks.  So I figured since we have the room for a long counter, why not add the extra sink for resale value someday. The brand name on the sinks is Huida, a Chinese brand commonly found here. Each sink had a sticker on it boasting that it was "a Nano self cleaning sink." Since this was something I'd never heard of I did some research. Apparently the sinks are coated with a protective coating that repels soap scum, dirt, mold and other stuff and lasts for years.

Also found some "ofertas" or sales on faucets and bought matching ones for the master bath sinks and one for the kitchen sink.  It took some looking around to find a kitchen sink that was a bit deeper and not already scratched and banged up.  And it was my idea of course, to add a "lavaplatos" or "lavavajilla" also known as a dishwasher to the mix.

Now the dishwasher brings up a whole different issue when adding it to an existing older home here.  The counter is made of cement on the bottom so the dishwasher will have to sit up four or five inches instead of on the floor.  This in turn will raise the counter up several inches, but we'll probably do it only on one side where the dishwasher sits.  Clyde likes this idea since he's tall and having a counter higher up makes sense for him.  But kitchen counters don't necessarily have to be all one height, so we think it will work out just fine in the end.  And since dishwashers aren't too common here, we only had a choice of maybe three or four models ranging in price from $399 to $700.  And when the store only had the floor model of the one we selected we went to the next higher price point and paid a bit more for a much nicer model.

Meanwhile back at the casa today, Clyde was outside mowing, trimming and weed whacking while I was cleaning inside.  At one point he called to me asking if I had clothes on but since I'd been cleaning showers the answer was no of course.  He wanted me to see some skydivers catching air directly over our property.  I grabbed something to throw on and ran outside hoping to get a picture but never did.  About three or four skydivers were gliding peacefully over our yard and then went behind the trees and out of view.  In our neighborhood there's an old WWII airport where small private planes come and go.  Although we heard they used to offer skydiving at this airport, after a plane went down they stopped.  What a contrast to see something so modern and expensive above a neighborhood of small, local homes that have so little.

And not to brag but a few years ago for my 50th birthday, Clyde and I both had the audacity to jump out of a perfectly good airplane.  Why you may ask?  Well, because the door was open and I was strapped to a hunky, handsome firefighter that pushed me out the door and then opened the chute.  Clyde reluctantly went along for the ride just because he felt he had to, being a manly man and a career firefighter.  Unfortunately though, the hot wife of the hunky firefighter that jumped with me was not certified to jump tandem and waited for us on the ground.  And we just love to tie people up and make them watch the video's of our jump whenever we can too. 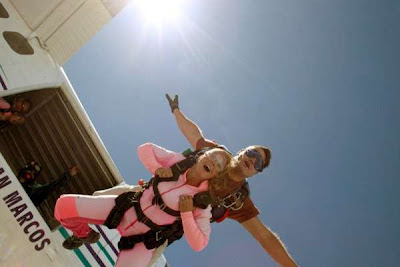 Our jumps a couple of years ago 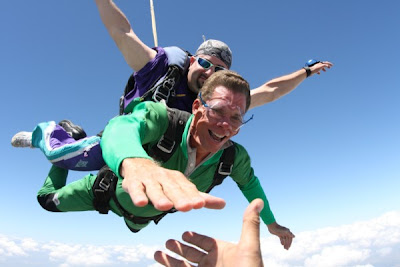 Addicted to the HGTV show International House Hunters that did a recent new show on Panamá which we just happened to catch.  A couple moved with jobs to Panama City and had a monthly budget of $3000 for rent.  They ended up in a condo overlooking the water but passed on a gorgeous penthouse for just $3400 a month. So anyone looking to spend big bucks in Panama City, it's still available to rent.  Other shows on Panama in the past showed a huge complex for one million dollars  directly on the water.  And another show featured two male friends looking to buy a bar and condo in the Casco Viejo section of the city for half a million.  People move here with all types of budgets and all types of needs.  Some want to downsize and live frugally while others still have that need for a huge house with all of the American luxuries.  And fortunately Panamá has something for everyone, including these cheap gringos.

Moving to Panamá or any other foreign country is much like jumping out of a plane at 10,000 feet.  It's a leap of faith and a jump into the unknown just hoping that the chute will open and you'll free fall peacefully into a new life.  Some days we free fall into a garden of tranquility and other days we get tangled in a tree and land upside down on the cement.  But whatever the outcome we always know it'll be an adventure we can share together....along the gringo trail.