The ceiling in our new house was literally full of poop, gecko poop that is, or at least it was.  Now we're full of gecko poop, bugs, dirt, fiberglass, and whatever else the previous owners managed to throw up there to hold down the tiles.  Clyde had the messy task of taking down the old tiles to discover the treasures that were buried in the poop, like an old hub cap and wooden planks.  Apparently they put stuff on the tiles to keep them from blowing in the wind, which really wasn't necessary since the old ones were heavy fiberglass.  We were worried that the new styrofoam tiles would blow away when a brisk wind came through the house.  So the solution was to put the old heavier tiles on top of the new lighter ones which seemed like a good idea.  And it also got rid of the old ones at the same time, instead of having me carry them outside to a burn pile. Despite the piles of rubble in the ceiling, we didn't find any money stashed away, which is what I was hoping for. 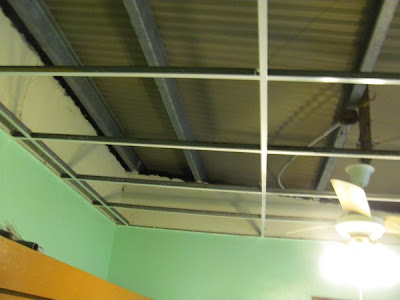 Tiles have been removed and
ready for new ones! 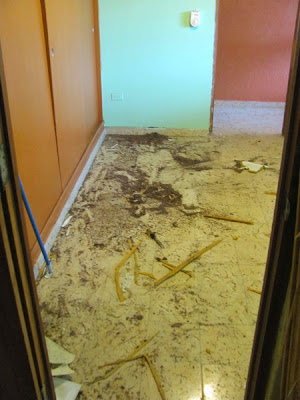 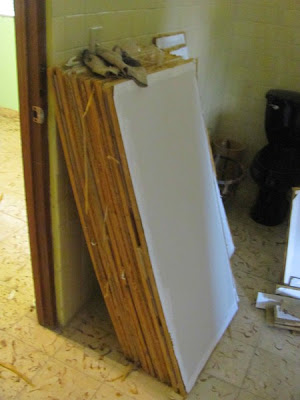 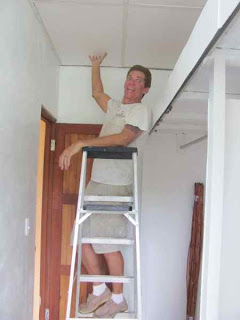 Clyde is having trouble getting the toilets and showers to work properly so on Thursday he checked the septic tank only to discover that the sucker was full.  He called a local company that cleans out the tanks and they came yesterday to access the problem, and quote a price.  They told Clyde they would come back early tomorrow and work on the tank.

Clyde had planned on leaving the gate to the property unlocked so they could begin the work before we got there.  We have to wait in the rental house in Capira for an air conditioner guy to come from Panama City, before going to the Chame house. But as we lie in bed last night Clyde realized that he forgot to leave the gate unlocked at the Chame house.  His plan was to get up at 6am and head over there, but before he crawled out of bed  his phone rang.  To our surprise they arrived bright and early at 6am to work on the septic tank.

So Clyde took off and I'm left here to blog and wait for the a/c guy, who said he'd be here between 10-11am after Clyde yelled him.  First he said he'd be here today, but when Clyde called him last night to confirm he said he was busy.  So mild-mannered Clyde let him have it and he agreed to come by today but not as early as we would have liked.  We need the a/c split unit removed from our bedroom here and then put into the Chame house.  Our insurance broker highly recommended this guy who has taken care of her units for years.

Since we replaced all three toilets and sinks inside the house, and even the one outside at the back of the property, we were left with quite a collection.  We left them at the side of the road and after a few days one of our new neighbors caught us driving onto the property and asked about them.  Clyde happily told him that the toilets and sinks were "gratis" which means "free" in Spanish and he could have them if he liked. Victor our new neighbor immediately ran home to get his wheel barrow and took all of the commodes and sinks.  Later on we put out some old ceiling fans, and once again Victor asked if he could have them.  Now he knows whatever is left outside the gate is free for the taking.  But after a while we heard a female yelling, probably his wife complaining about all the junk he was bringing home.

The house in Chame is quiet and as I worked I could hear birds chirping and someone in the distance saying "buenas" and "hola" over and over again.  As we were leaving one night Clyde stopped the car by Victor's house and yelled over to him, asking what type of birds he had.  His reply in Spanish was "loro."  Suddenly the lightbulb in my head turned on.  "Loro" means "parrot" and it was the parrots at the neighbors I'd been hearing repeating words in the quietness of the breeze.  Parrots are wild in Panama and commonly seen around that area.  Once things settle down for us we'll have to snap a few pics of some birds around our property.

Clyde is so thrilled to have put the last ceiling tile up, and rewired the last of the lights and ceiling fans.  And I'm happy to be able to put down the paint brush, clean up the mess and make it look like a house we could live in.  And we did manage to hang up our hammocks, although we didn't spend any time in them.  And you know what they say.....home is where you hang your hammock....and that would be here in Panama along the gringo trail.