Mirror, mirror on the wall, who has the most colorful mirror of all?  We do of course at "casa de muy colores" in Panamá.  Our house of many colors came with a large, heavy mirror that hung on the living room wall.  The large mirror was framed with hundreds of tiny, mirrored squares and some of the squares were missing their mirrored finish, which is nothing more than mirror paint.  So I thought I'd paint the little squares using all of the colors that we put into the house.  Four hours later I was happy to see that it turned out just as planned.  And the best part is that the mirror was a free hand-me-down, and the paint was all leftover from painting the rooms of the house. 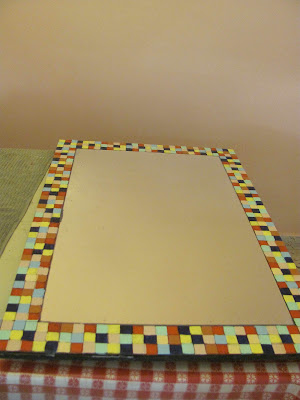 "Espejo de mas colores"
Mirror of many colors
Yesterday Clyde discovered that the pretty green toilet and sink we bought for the tiny bathroom off what used to be called the "maid's room" doesn't fit.  The room is so small that they found a toilet that sat back closer to the wall than normal toilets do.  Clyde said there is something to buy that can offset the toilet, but instead we're going to look for a different type of toilet today.  But turns out that the green set will fit outside in the bathroom there that's located next to the "guard shack" which will now be a tool shed. 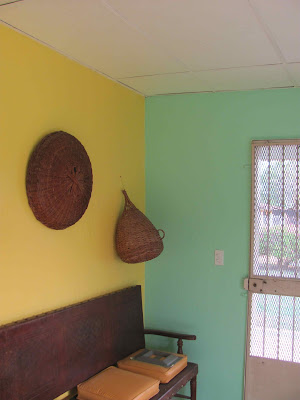 Entry Way Done!
new paint and new ceiling!
﻿
So today we're off to pick up our car that was having body work done at a place called "Pretty Car" in La Chorrera. After waiting two months for parts that were on order, they managed to fix the car in only three and a half days.  Excited to see how it looks, and hopefully the paint will match since it's the color that 95% of the cars in Panamá are, which is silver. 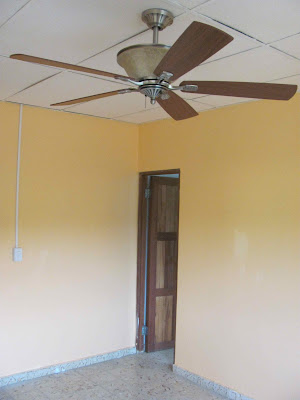 master bedroom with new paint, ceiling tiles
and a new ceiling fan
﻿
Then off to Panama City to find two new toilets and some other stuff for the house.  Although shopping for the house is exciting, I'd much rather it be done already and we were swinging in our hammocks.  Speaking of hammocks, we did manage to take some "hammock time" yesterday here in Capira.  We only worked a half day on the house and then came back here early since Clyde was badly in need of a hair cut.  But instead he opted for a nap in the hammock first, but I did manage to chop his locks later on before he grilled some chicken on the barbie for dinner.
And for anyone that cares and remembers when we discovered a lump on Venus our new dog, and the vet said it was an allergic reaction to something.  Well happy to report that the lump has been shrinking and is just about gone now by just giving it time.  A bit sleeker in her appearance as she's taken off a few pounds, she's doing well.  She does fine on her daily walks usually, until the other day when a cat went running by and she tried to take off pulling me behind her.  Quickly I had to correct that behavior as the pack leader before I went flying down the road.

Perhaps our mirror of many colors is just a reflection of our new lives here.  Each tiny, colorful square represents a new adventure so full of vibrant color that it screams out to the world... that we're here.  And when those little squares are put together they create something special, a new life just waiting to be discovered... in Panamá....along the colorful gringo trail.
at April 16, 2012