If your skin is white they assume you must live in Coronado and are a rich foreigner.  Recently after a long day of back-breaking labor on our house, we showered, and changed clothes as usual.  On the way home we stopped to eat at a restaurant called "Delizz."  We'd passed this restaurant hundreds of times since it's directly on the Pan American highway and our friends had mentioned that the food was good.

After we ordered food Clyde took off to find a bathroom and while I was sitting alone the waitress came by to chat. In Spanish she made a statement, something to the effect of  "so you live in Coronado?"  For those reading this unfamiliar with Panamá, Coronado is a ritzy area of gated communities where many expats live.  Surprised by this assumption I answered in Spanish by telling her that we live in Capira but have bought a house in Chame and will be moving soon.  She went on to ask in Spanish, " so you bought a house in Punta Chame," which is also fast becoming an expat haven.  To which I said no and explained that are house is in the town of Chame located in back of the police department and fire station in a Panamanian neighborhood.  Then I went on to tell her that we bought an old house that needs work and we have been doing all of  the work ourselves.  She smiled and nodded in acceptance and when she walked away she passed by Clyde, looked at him and said "tú Panameño!"  He looked at me wondering why the waitress just called him a Panamanian and I had to explain what happened in his absence.

I was surprised at the comment and wonder how many other locals assume the same when they see gringos.  Since my dear, friendly husband likes to talk he usually likes to mention to those we meet along the way where we live.  And then impresses them with him being a retired firefighter and paramedic for 26 years.

Now let me add that although we don't live in the affluent Coronado community, our house is just a 10 minute drive away.  So we do take advantage of the modern shopping in the area, even though it's a bit more pricey than the stores in La Chorrera where we used to shop. And as for Punta Chame the gym we've been using is located there in an expat resort with a nice swimming pool.  So although we don't live the life of gated community expats, we do slither in at times still wearing our Wal-Mart bargains.

We enjoyed the restaurant called Delizz, as it's a lovely roadside cafe with scrumptious food.  We ordered "Shrimp Ceviche" as an appetizer and a chicken dish stuffed with spinach, topped with shrimp and a white-wine cream sauce for our main course.  The presentation of the dishes were incredible and the tastes indescribable.  Their prices were on the high side for Panamá (our meal was around $10) but well worth the price.  The place was clean and nicely decorated and the waitress was attentive and friendly.  Delizz will be added to our list of good places to eat in Panamá. 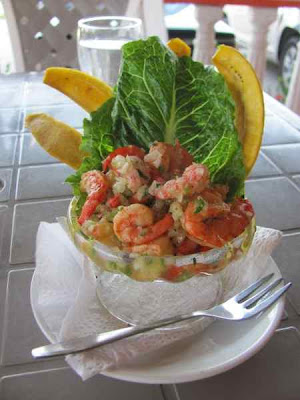 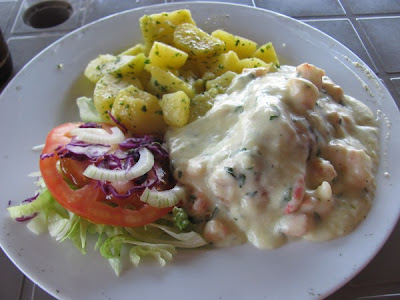 Spinach Stuffed Chicken
with Shrimp
﻿
As for progress on the house, yesterday we replaced the ceiling tile in the living and dining room areas as well as the master bedroom. It made quite the mess as we tore down 30 year old fiberglass tiles and the dirt and gecko poop fell like rain.  And since Clyde was putting the tiles up, I had the task of taking the old tiles outside to the back of the property to be burned at a later time. The new ceiling looks wonderful and gives the rooms a fresh, clean new look.  He also put up a new ceiling fan in the living room since that room never had one.  Later I added another coat of paint to the side hallway and touched up a few areas too.  Filthy and tired we showered and changed clothes before leaving the house to come back to Capira.

Into every life some gecko poop and fiberglass must fall, as we continue to fix up and knock down, making a new home out of an old one.......along the gringo trail.
at April 12, 2012