All pumped up and no where to go, as we enjoyed some good Panamá coffee with friends in Coronado yesterday. A coffee social sponsored by CASA (Coronado Area Social Association) was held at someones lovely home near the beach in Coronado.  We sipped away while chatting with friends both old and new way into the afternoon hours. 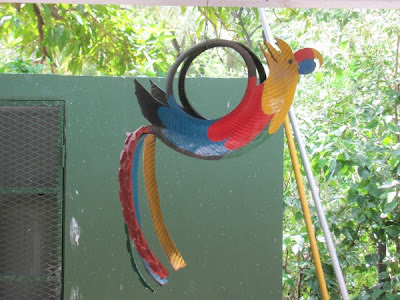 I (Clyde) was impressed with this parrot
made out of an old tire
﻿
It was after 1 pm before tummies began to rumble telling all it was time to leave and head out to find lunch.  We joined some new friends for lunch at an ocean front restaurant in San Carlos.  The surf was so powerful that the waves splashed up over the railing in front of our table as we dined. By the time we got home it was after 3 pm and time to take off some clothes and jump into a cool shower. 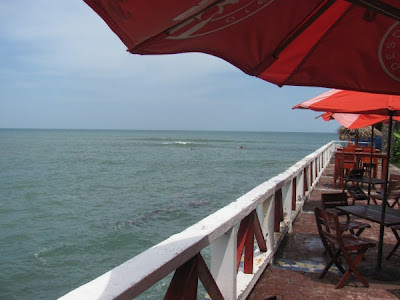 A view from the restaurant
in between waves 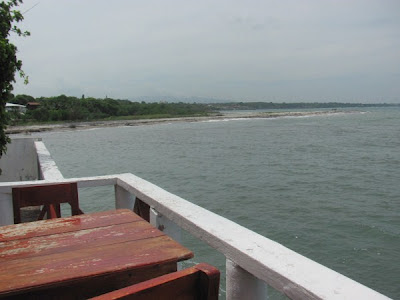 The other direction
After cooling off and putting on some shorts and a tank, I decided to give the dog a bath.  As I walked outside and she noticed me carrying a towel she knew someone was going to get washed and made herself scarce.  She quickly ran to hide under the gazebo hoping that I wouldn't see her. Even coaxing her with the lease didn't work as she'd rather not get washed if she didn't have to.

The day warmed up into the 90's and I took four or five cool showers before the day was over.  The heat usually doesn't bother me but for some reason I was melting.  From my morning workout on the bike and lifting weights until I was ready for bed I was hot and sweaty.

While having breakfast today we heard a Panamanian doorbell, which is when some local stands at our front gate and yells "buenas" to get our attention.  Clyde threw on some clothes, went outside and walked upto the front gate.  By this time Venus our doberman was trying to climb over the fence and eat the people since she doesn't seem to like Panamanians on our property.  The couple at the gate were from some church handing out paperwork and trying to get us to listen to their speal.  Clyde immediately used the "I don't speak Spanish" card.  But the man quickly asked "do you speak English?"  Oops....guess that's not going to work this time, so Clyde just politely said "no thanks" and walked away.
After working out and taking a hike with the dog we headed out for and exciting day of grocery shopping.  First stop was for some non grocery items and a stop at GNC in Westland Mall for some protein powder.  Since we were in La Chorrera we stopped for a brick oven baked pizza at our favorite pizza restaurant called Viene Qua.  We were delighted that the Panamanian waiter came over to chat and wondered how we'd been since we haven't been there in a long time.  But since we're probably one of the few gringos that eats there, it's easy for him to remember faces.

After that we headed to the outdoor produce markets for cheap, fresh finds.  Then stopped off for a few $1.00 fresh pineapples and avocados that cost $2.00 for five.   Final stop was for groceries before heading home for the evening.

Tomorrow heading over to a local restaurant for a July 4th celebration of drinks, food, live music and evening fireworks with other gringos.  Of course July 4th is an American holiday but the locals are all too happy to take our money and let us party in their establishment.  The Canadians had a chance to celebrate Canada Day on Sunday so now it's time for us Americans to party.  Perhaps I'll put on my red, white and blue flag bikini and declare my own independence tomorrow....along the gringo trail.
at July 03, 2012