Those of us that move our lives to a foreign country are a different breed.  A little crazy, adventurous, daring, willing to step out on the ledge hoping not to fall over the other side. Willing to leave our kids and families behind, and start all over making new friends to replace the loved ones we left behind.  Since we've been here we've met some interesting people from all over the world, and some are crazier than others.

Last week we attended the monthly expat mixer in Coronado, and as usual mingled among other retiree's, along with a few younger couples.  During the mixer in walked this young, nerdy looking, lean but muscular man, maybe in his 20's dressed in bicycle shorts and a tee shirt.  He introduced himself as Patrick and went on to tell his story.

Patrick a young American with nothing more than a bicycle, was riding from Panama City, Panama to Miami, Florida.  He needed to pick up his dog in Miami who would accompany him on his journey across the United States and down into the New England states.  The dog would be placed in a small trailer he said and secured for his safety.  Apparently his ex-girlfriend was holding the dog for him until he could pick him up.

After having a bite to eat at the mixer he was headed toward  Costa Rica, then down through Mexico before entering the US through Texas and heading up to Florida.  This courageous or shall we say absolutely crazy young man, doesn't speak a word of Spanish either.  In awe everyone wished him well and he was on his way.

Today while walking over to a friends house we noticed a gringo looking gentleman outside of his house.  We stopped to introduce ourselves to yet another gringo neighbor living in this Panamanian neighborhood.  His name is Tom and he's been living outside the US for some 30 years now.  Before settling in Panamá he lived in Ecuador, Columbia, and Brazil.  He worked as a pilot and still carries a valid license to fly a plane which he does here on a regular basis at a nearby, one-runway air strip.

In the house between Tom's house and ours is a young American man named Tico and his Panamanian wife and kids.  On the next street over is our American friend Daniel and over near the airport is yet another gringo named Ron that also plays with planes for fun.  So despite the fact that we live in a Panamanian neighborhood, we're surrounded by gringos.  In this tiny little neighborhood known as "celaje" which means "sunset cloud" there are five gringo households that we know of, thus far. 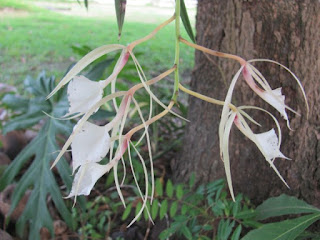 New flowers discovered
on our Finca 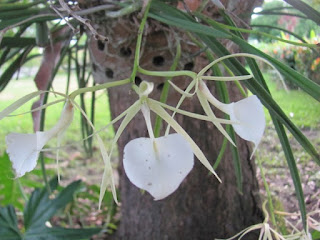 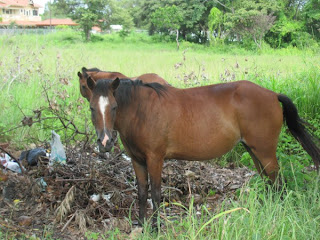 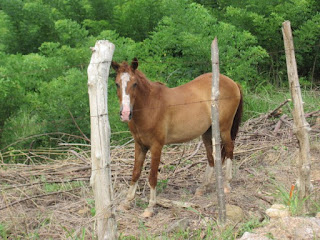 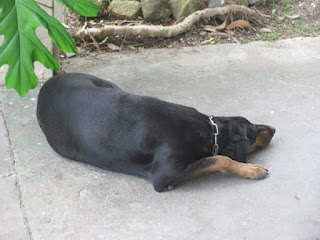 Our mean guard dog on duty! 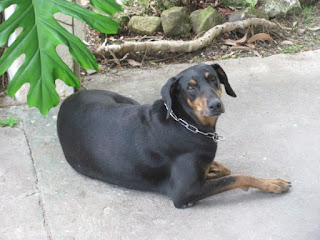 See?  The click of the camera woke her up!
﻿
Actually it's rather cool to have the comfort of other gringos around, for those silly questions we still have about life in Panamá.  It just goes to show that one never knows who they might end up living next door to, way across the ocean in Panamá....along the gringo trail.
at June 30, 2012