A thick layer of dark gray clouds line the morning sky without a trace of sun on the horizon.  Even the birds are rather quiet, singing a less than happy song.  A bit eery so far on this early morning as if it's the calm before the storm.  A rooster crows in the neighborhood nudging the sleepy neighbors out of a sound sleep.  The sound of a little girls voice can be heard from the neighbors house, as she says good morning to her papa.

Yesterday the sun came out and I relished the idea of baking in the sun for a while after our workout.  On our way to the gym we passed a police checkpoint, which are very common here.  About five or six cops dressed in army green with black bullet proof vests and knee pads, formed a human tunnel for each car to drive through.  Another cop stood on the side of the road with both hands on his rifle ready to shoot, if necessary.  They waved us on through, so apparently we didn't look suspicious.  They seemed to be looking for someone specific, perhaps some drug runners coming out of Costa Rica?  The police have the appearance of military here and can be seen every where. Yet there's said to be less crime here than in the U.S. and maybe the strong police presence is the reason why.  The men and women police here have this presence of serious authority, the kind one doesn't want to mess with.  And the large rifles hanging on their side add to their scary presence.  Although I have to admit that the male cops are nice eye candy to brighten up my day. 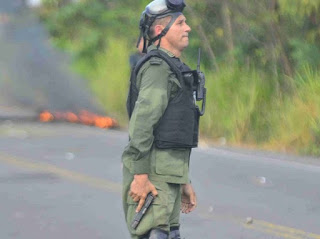 We didn't dare take a picture of the cops on the road,
so I admit that I stole this one
Back in the states at the Corpus Christi Athletic Club I discovered spinning about seven years ago.  It's a group cycling class that's based on outdoor riding and incorporates flat roads, hills and mountains along with road racing all on a stationery bike.  During a 50 minute class I'd easily cover over 20 miles on the bike, burn lots of calories and take my heart rate into the cardio zone.  My love of spinning was enough to get me out of bed at 4:30 every morning to make it to class by 5:30.

Now living in Panamá there are no nearby spinning classes so I'd have to make my own.  Soon after we moved here we found a spinning bike fairly cheap.  With tunes blasting in my head, I'd practically dance on the pedals through a series of standing, sitting and climbing mountains on the bike using the resistance knob.  It was almost like a form of meditation to me since it made me feel so good as I'd get my sweat on.  A few days ago while standing on the pedals, my cheap little spinner broke.  Clyde took a look at it only to find that the ball bearing had disintegrated in the eight months I had it.

So off we went to the local stores to look for another spin bike.  We found only one in Coronado at El Machetazo and thought we might find the same bike cheaper at the the same store in Vista Alegre.  So off we went for the 45-minute drive only to find they had it at the same price.  From there we drove to a nearby mall to check out what the Do It Center had for bikes, but they didn't have any spinning bikes.  We continued for another 30-minutes into Panama City to check out a few places there, but still no spin bikes.  So we ended up buying the bike in Coronado.  They seem to sell every thing here already assembled with no paperwork, like a floor model. 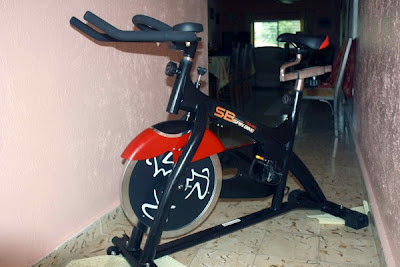 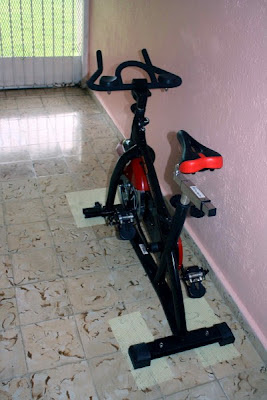 We had to pay for the bike at a nearby register then two store clerks loaded it onto a cart and took it downstairs to the first floor.  A long thin piece of paper was attached to the receipt which Clyde held.  The paper included the sku number and the word "cancelado" and was signed by the cashier.  At the door the security guard had to tear off part of the long, thin paper and verify that the sku number matched the merchandise on the cart, even though we had two store clerks with us.  Security is a serious matter here and guards are everywhere and look similar to police.

When I got home I immediately looked up the bike online to see where it came from.  Turns out it comes from Poland, as the website was in Polish with the price in Polish zlothy's, whatever that means.  But unlike any other piece of exercise equipment I've used, and I've used many, this bike has no place to put a water bottle.  Apparently in Poland they don't need to hydrate while exercising. There's also no electronics on it that record miles, calories, and time but I can make due without that by just wearing my heart rate monitor.  I was just happy to find a spin bike that looked like a nice rugged piece of equipment that will take the abuse I plan to give it, while peddling my butt off.  Actually cyclists develop nice shapely butts from riding along with muscular legs and toned abs.  Spinning is a great workout that incorporates the entire body and burns hundreds of calories in each session.

Time now to go get my sweat on and then see where this day takes us...along the gringo trail.
at June 16, 2012