Raindrops Are Falling On Our Heads.......

Living in a foreign country can have it's share of stresses while just trying to live life.  Even the simple things can be difficult here until we learn to think like a Panamanian.  A new three-story department store called El Machetazo recently opened in Coronado. It's sort of Panama's version of Wal-Mart and provides groceries, clothing, housewares, electronics, hardware, garden, toys and more.  They even have a small craft and fabric department with yard goods, craft paints, yarn, needlepoint, sewing notions and such on the second floor.  The third floor houses garden supplies, a hardware and paint section, toys, and office and school supplies.

One day while looking for some post-it notes upstairs in school supplies I noticed a section on kids crafts.  There were such items as modeling clay, stencil's, artist supplies, pipe cleaners (known to crafters as chenille stems), wooden popsicle sticks used for crafts, felt squares, sheets of craft foam and more.  In the U.S. this stuff would be in the craft department not in with school supplies.  Nice to know this stuff is available here, now that we know where they keep it.  Clyde was looking for spray glue which is a craft item to us, but apparently not here so we'll have to try a hardware store.

As we were leaving for our morning dog walk today we noticed a gringo man walking by pushing a baby stroller.  He said hello and stopped to chat.  A young American originally from Miami, he's been living in Panamá for ten years now.  He married a Panamanian woman, has two toddlers and works in real estate.  They'd been living in Bocas del Toro prior to moving here, but decided it's not a good place to raise kids since it's quite the party town.  They are renting the brown house next door where the owner was burning his grass filling our house with smoke, if you remember from a previous blog.  So kind of funny that we moved into a Panamanian neighborhood and ended up with another American living right next door and another American on the next street over.

Had a quiet day today hanging out at home doing some little projects.  While moving some chairs around outside I slipped on a wet tiled step and fell on my side.  My thigh took the brunt of the fall which hurts to the touch, but thankfully nothing major happened. 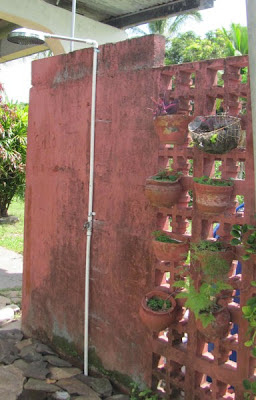 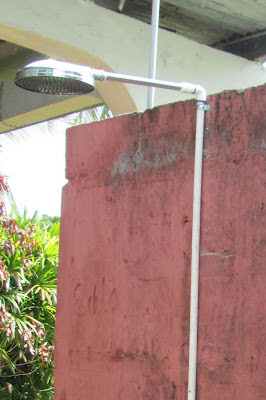 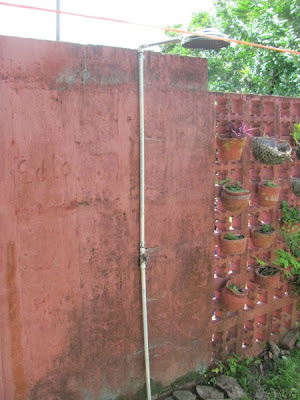 The prior owners had plants everywhere, even on this wall
A new addition to our outdoor living space is a shower complete with a rainfall shower head.  The house already had an outdoor shower when we bought it, but it wasn't too private so Clyde moved it over and changed the shower head.  Now we can feel raindrops falling on our heads in more ways than one, whether we're in the shower or not.....along the gringo trail.
at June 05, 2012