After our stop in Colon we headed over to Fort San Lorenzo.  Toward the end of the 16th century King Phillip of Spain ordered a fortress to be built overlooking the Chagres River. The purpose of the fort was to protect the land from pirates and slave ships as it offered a clear view of incoming ships.  Originally the fort was built out of wood, but in time deteriorated and was burnt down in 1596 by Francis Drake.  The fort was eventually rebuilt in 1671 but attacked by Joseph Bradley who was one of Captain Henry Morgan's men.  There were 350 men stationed at the fort and all but 30 died in the battle, including all of the officers.  Morgan showed up less than a week later, just in time to see Bradley die of wounds incurred during the attack. 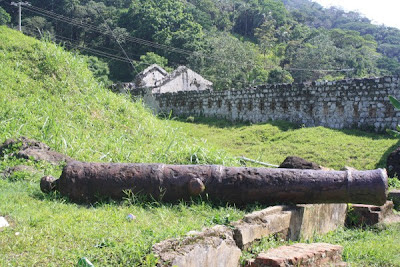 Our first look at the fort 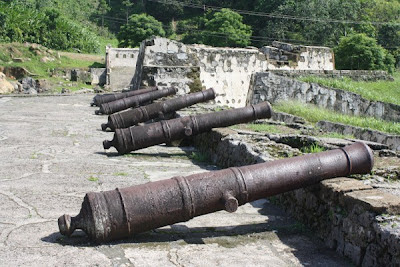 Cannons at the fort 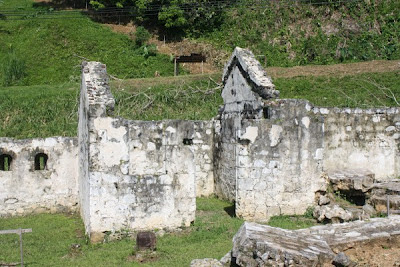 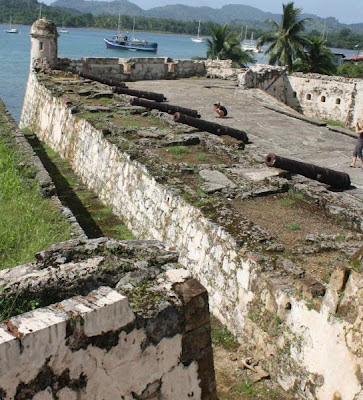 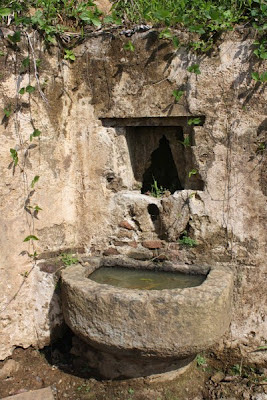 A new discovery as they expand their digging in the ruins 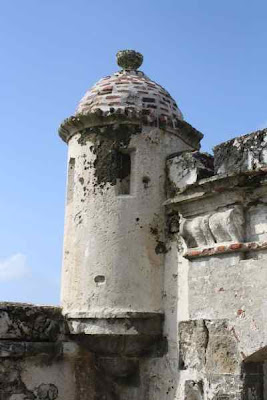 The castle overlooking the water

The fort was rebuilt by Spaniards but attacked again in 1740 by Sir Edward Vernon, under orders from Britain.  They bombarded the fort with their ships cannons until the Spaniards surrendered.  After destroying the building and killing many, Vernon's men set fire to one of the buildings, destroyed the castle and then sailed off to Portobelo.  In 1761 the fort was repaired and fortified, but never again attacked by pirates.  It was abandoned by the Spaniards in 1821 when Panama became independent.  After Panama became part of Columbia the fort was used as a prison, then as a point of entry for mail from from Britain to Latin America.  During the California Gold Rush in 1849 it served as a campground for adventurers.  The Chagres remained the main inter-ocean route until 1850 when the railroad was built from Colon to Panama City. 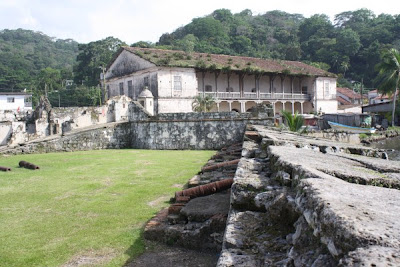 The original immigration and customs building 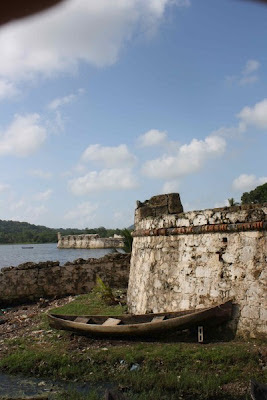 Side view of the fort 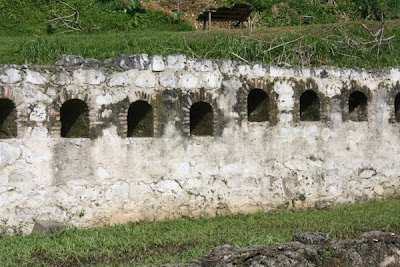 Underground barracks, perhaps this is where the officers hid 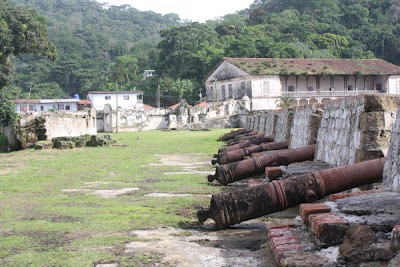 A large piece of history 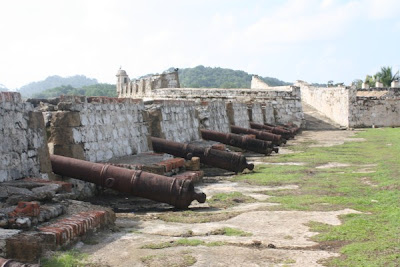 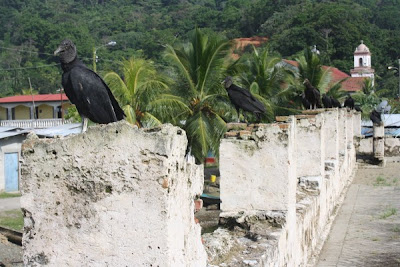 A bird perched on every pillar like they were statues, but they're real 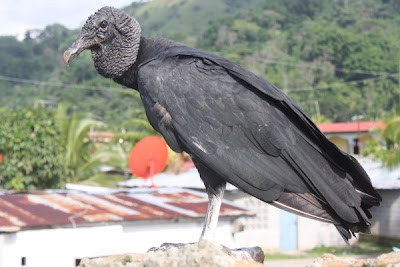 Yes it's a real bird

The 17th and 18th century buildings that remain today are magnificent examples of Spanish colonial military architecture of this era.  In 1980 Fort San Lorenzo was recognized by UNESCO as a World Heritage Site.  The fort gives us a fascinating glimpse of what life was like back then. 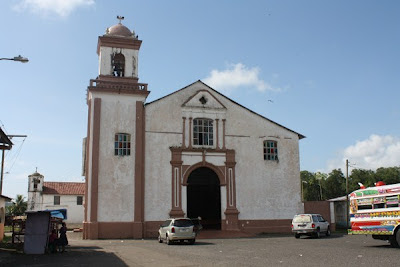 Church of San Felipe, home of the "Black Christ" 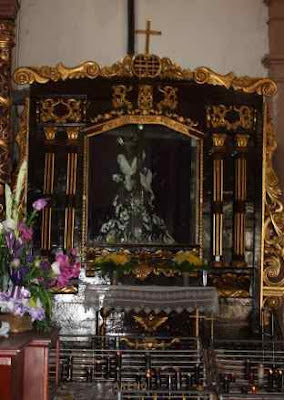 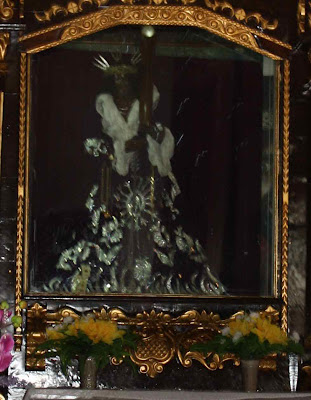 Close Up of the Black Christ 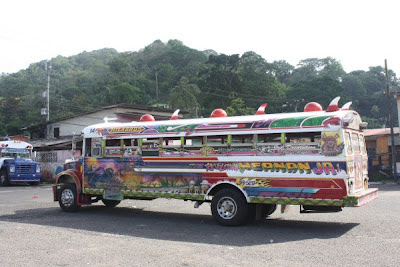 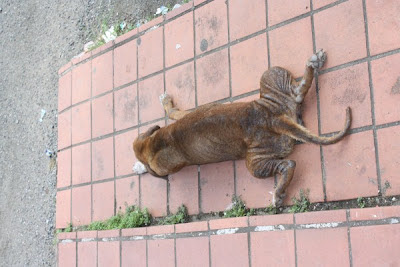 A street dog taking a nap 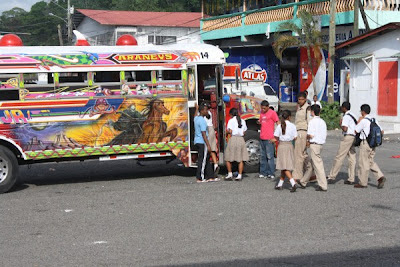 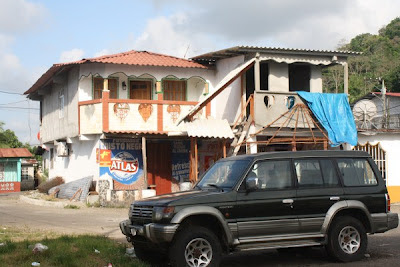 An old house in Portobelo 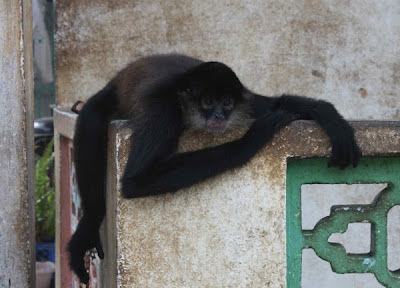 A pet monkey hangin' out on a porch


The town of Portobelo itself, is a run down, sleepy little town with a population of less than 3,000.  Founded in 1597 by Spanish explorer Francisco Velarde Mercado.  Legend has it that Christopher Columbus originally called the city "Puerto Bello" meaning beautiful port in 1502.  From the 16th to the 18th centuries it served as an important port for silver exporting.

Today Portobelo is a small waterfront community of run down cement block homes, a small grocery store and a few restaurants.  The streets are lined with river rock making for a bumpy walk, while a church and marketplace take center stage in the village square.  The church of San Felipe, has become well-known since it's the home of the "Black Christ."  This carefully guarded, priceless relic is carved out of dark wood which makes it appear black.  Some say it arrived in the village in 1658, but nobody really know when or how it got there.  Every year in October they celebrate the statue with a procession through the streets.  Tens of thousands of pilgrims drive, walk or crawl to the tiny village in October to worship the eight foot statue, hoping for a miracle.

Our trip was like a step back in time as we walked through ruins of old and towns filled with poverty.  But as we come back to present day we realize how fortunate we are to be able to experience such wonders, as our adventures continue....along the gringo trail.
at June 23, 2012