As my head sinks into the pillow I'm entertained by the delightful sounds of the night. A chorus of frogs gurgles loudly with a full range of melodic tunes resonating through the night air. A gecko soloist grabs center stage chirping out his lyrics, while a few dogs bark out a rhythm in the background. Usually a relaxing lullaby, some nights the musical serenade gets so loud we almost need to close the window. But nature has no volume control and plays it's music freely throughout the night until first light. As the night sky lightens up and breaks into day the melodies change. Loud birds chirp, sing, howl, yell and talk waking us from a sound sleep. Roosters crow loudly and wild parrots mimic the sounds of children yelling "hey," "buenas" and "hola."
It's a jungle out there and sometimes I feel as if we're living in a tent since the sounds are so real. In our old life we missed so much by closing the windows and keeping the central air conditioner on all the time. But in our attempt to live cheaply here in Panamá we try to enjoy the freshness of the night air using only a ceiling fan.
Earlier this week while we were at the gym the sky grew dark and it began to pour. We expected to lose power but managed to get our workout done while it was still on. Since we usually use the pool afterwards we had our beach bag with us. I wrapped a beach towel around me and ran to the car for the drive home. The highway was flooded in spots so driving was slow and we arrived home to a flooded front yard. As we looked around the neighborhood many of the yards were under water, some of which probably seeped into the houses. Our house is raised up several feet so no problem there for us, but we did find a few leaks in the ceiling along the edge of the house. The torrential rains continued for hours and hours probably leaving a foot of rain before it dried up. 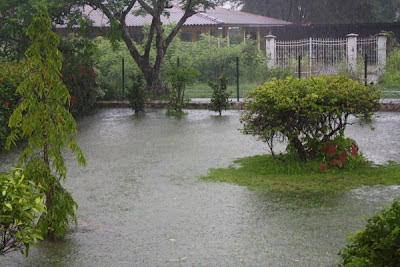 The Rains of Panama 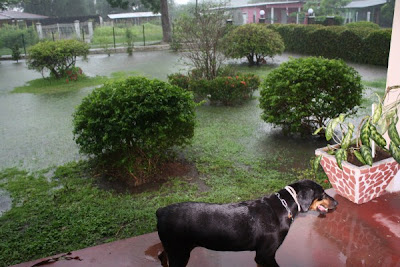 Our Sweetie trying to keep dry
The rains seemed to bring on the ticks and since Venus loves running through the hedges looking for lizards, she's been covered with them. Apparently a flea and tick collar doesn't work here so we've switched to the drops and she's been tick free since. Last night after eating her dog food she immediately ran to get a mango, as if she knew it was meant for dessert.
Clyde's always doing something around the house, and yesterday he worked on hooking up an outside shower. The previous owner had one out there, but Clyde thought he'd move it to a more private spot so we could use it Au natural. He's showered outside after getting filthy working on the garden. It's also nice to have after a trip to the beach to wash the sand off before going inside the house.
A friend called us on Thursday to let us know about a 30% off sale at a store called Saks. Since we were planning a trip to the mall anyway, Clyde made me look around the store. I bought five tops, two jumpsuits, four pairs of panties, a ten pack of socks and some reading glasses for $23.00. Three of the tops were just 70 cents! The clothing selection here is so cheap and some are buyouts from the states. For instance, I saw a ladies Jockey tank top with the original tag on it from Macy's for $24.00. It was marked down to a few bucks and then the additional 30% off of that. Last month we bought curtains for $5.99 that were labeled $35.99 from Bed Bath and Beyond. So your trash becomes our treasures for a fraction of the cost.
Moving to Panamá we've sort of been living as tourists thus far, in that everything is fresh, new and exciting. Now that nine months has gone by and we're settling in to being residents the newness has wore off. We might say the honeymoon is over and now we're seeing life in Panamá as it really is, the good, the bad and the in between. We knew this would happen since all the books we read said so. Into the life of every expat there comes a day when you look around and say, "what are we doing here?" Perhaps I'm missing the kids, family, friends and our old life in the states? Maybe a trip back to visit this summer will snap me out of that. Not that I'm unhappy here because I am happy, but just having a dose of reality that we knew would come.
But also with familiarity comes being less fearful of speaking the language or not worrying about looking stupid not knowing it. Being more comfortable going out alone without Clyde and feeling like I belong in this foreign land that's not our own. Feeling comfortable shopping alone, going into the fitting room and paying at the checkout. There's lots to learn here with millions of new experiences not yet encountered...along the gringo trail.
at June 02, 2012