The couple would always stress to the realtor showing the house that "lots of entertaining space is a must" and they would go on to say "they wanted to have parties and invite all of their new friends."  New friends, I'd think?  You're moving to a foreign country and don't know another breathing soul here besides the real estate agent showing you the house.  So who are they planning to invite to these parties? This of course was a scene from the famous show International House Hunters where someone moves to another country and buys a house.

But here we're only nine months into life in Panamá, and we threw a party for twenty people this past weekend.  If someone would have told me we'd have that many friends this soon, I never would have believed it.  The house warming party began around two and our first mission was to show off our new-to-us house.  Since everyone brought a dish of food to share there was lots of food to fill our bellies with for a late lunch.  As the sun set people headed out except for some of our closer friends who lingered on late into the evening. Socially, we know hundreds of expats here and of course some have become friends and some just acquaintances that we see here and there.  But it's nice to know so many wonderful people that have rolled out the welcome wagon and welcomed us to this new land.

After a late start waking up on Sunday we headed over to Lago de San Carlos.  A long, windy road past the town of Las Lajas, the paved road turns into dirt after driving for about 24 kilometers.  The dead end road ends at a small lake where they rent row boats.  A walking path encircles the lake making for a nice little jaunt.  After walking a bit we stopped to chat with an American man and Panamanian woman.  We learned they own a b&b in San Carlos, about a ten minute drive from where we live.  I thought it would be fun to rent a boat and row around the lake.  For only $6 we ventured out to explore.  Soon I found out that wooden oars are much more tiring than the plastic ones that came with our kayak. As the clouds and thunder could be heard over the mountains, we made it back to shore just before the rain poured down. 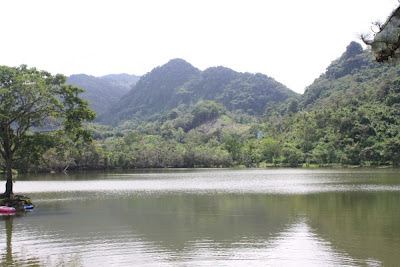 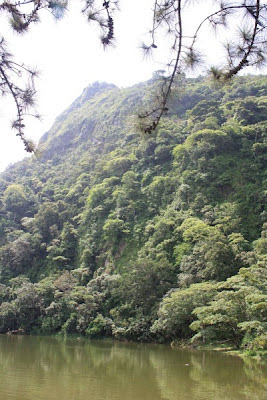 Wooded Cliffs around the lake 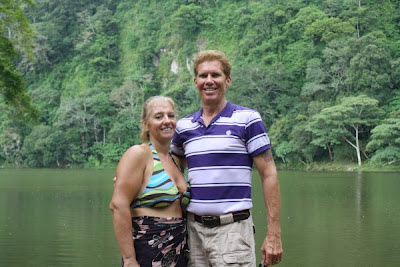 The two crazy gringos
﻿
Once back in civilization we drove into Coronado to try a new restaurant called Gourmet Pizza.  A Greek salad with pita bread and pizza filled us up as we watched the gringo's come and go since this area is flooded with expats. An older woman and her adult son tried to decipher the Spanish menu at a nearby table.  He asked her what "aceituna" was and she said "tuna."  I had to laugh to myself since "aceituna" is the Spanish word for "olives."  The word for tuna is "atun" and the word for oil is "aceite."  So you would think that "aceituna" means "oily tuna" but instead it means olives.  Just like the word "pollo" which means chicken, so you would think "repollo" has something to do with chicken but it actually means cabbage. Yet the word for olive oil is "aceite de olivia" so why then don't they use "olivia" for olives?  Who knows and maybe some Spanish cultures do. 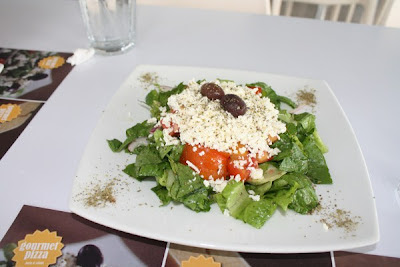 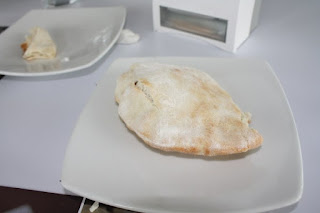 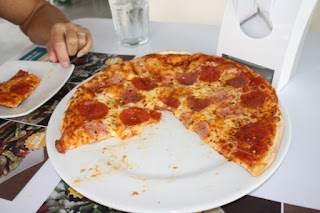 Our Pizza
Another busy weekend goes by and the weather was just beautiful through it all.  As I type this the neighbors parrot is screaming "hey hey" and "hola" in this awful, screechy voice.  His birds seem to come and go as some days they're there and some days they're not.  We prefer the days when they're some where else screeching.  But like it or not it's a jungle out there and in here sometimes as the gecko's, frogs, and lizards come in to share our home with us here in Panamá....along the gringo trail.
at June 11, 2012