When we threw together some last minute costumes for a Halloween party, we had no idea we'd be such a hit.  Strutting my stuff among a room full of hot, young women, I tied for the prize of sexiest.  The prize we split was a bottle of vodka and a bottle of rum, to add to our liquor closet that already houses other bottles we've won at other events. 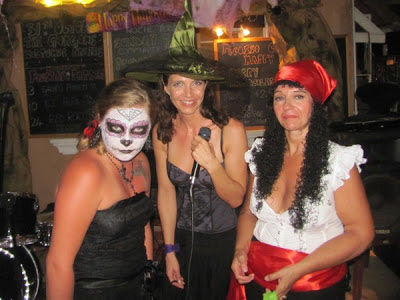 
I came up with the idea of pirate and wench since we could use our own clothes and just add accessories.  Clyde wore black slacks tucked into boots, and a white shirt.  We bought him a hat with attached hair for only $2.95.  An existing black pencil skirt with black suede boots matched up perfectly with a new white blouse that I found for $5.99.  For around $12 we found a long-haired, curly black wig for me and then we picked up a few yards of satin fabric for $1.49 a yard to make sashes. So for less than $25 we pulled off some cute costumes to show off to our friends.  Was I ever surprised when some of our friends really didn't know who I was until I opened my mouth to speak. 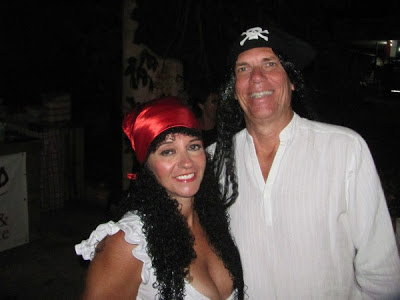 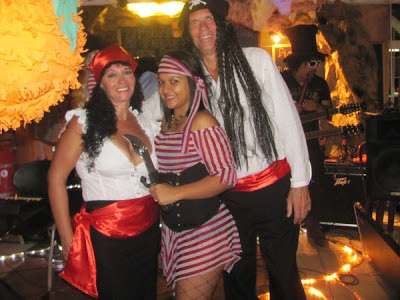 We found another Pirate
﻿

During the night we sat with a new couple that just moved to Panamá a month ago.  Clyde pulled out our card which had our picture on it, along with our contact information.  The women looked down at the picture and asked "who are these people?"  We laughed and explained that we usually don't look like pirates with dark hair and next time they see us they probably won't recognize us. 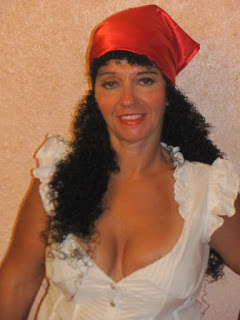 Who is this raven haired beauty?﻿

Throughout the night an older, obnoxious, drunken man kept hitting on me and everyone was surprised that Clyde didn't haul off and knock him out.  Even on the dance floor he'd come by and dance in between the two of us and we'd have to move.  He did finally have to tell him to "stay the hell away from my wife"!  It hurt his feelings but seemed to do the trick. 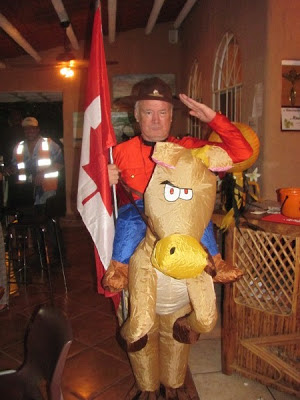 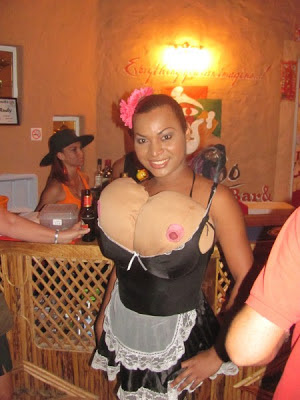 One of the waitresses joins in on the fun
﻿

A fun night of mingling with old friends and making new ones as we danced the night away.  There were some great costumes among the crowd of all ages.  This sexy grandma wench wowed the crowds with her handsome pirate as we celebrated another day of retirement....along the gringo trail.
at November 01, 2012