We rang in our third New Year's Eve celebration in Panama on the white sandy beaches of Bijao, a resort community in Santa Clara. It was quite the International blending of cultures with our friends Sally and Bobby Henderson who hosted the event on the grounds of their condominium.  Bobby's from Scotland and was working in Libia when he met Sally, born and raised in England.  The two traveled the world before deciding to make Panama their retirement destination.  There were several people from Germany, Canadians and of course us Americans thrown into the mix. An aerial shot of Bijao Resort


The party started under a large palm covered bohio that sat poolside, just steps from the sandy beaches. Everyone brought some finger foods to munch on along with some adult beverages to help bring in the new year.  Before mid night we headed down to the beach to watch the spectacular fireworks display going on all around us.  An array of Chinese lanterns dotted the night sky filling it with splashes of white light.  These miniature versions of hot air balloons were ignited by tiki torches until they heated enough to soar into the dark sky. These fearless creatures of light made their way through mesmerizing bursts of colorful fireworks.  As bright lights filled the air Latin music pounded from nearby party sites, with an array of old and young enjoying the festivities. The waters of the Pacific Ocean glowed from the lights overhead, as we bid farewell to another wonderful year. 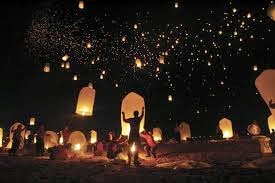 A Borrowed Photo Of Sky Lanterns


Back in the bohio our longtime musician friend Bobby entertained the group playing his guitar and initiating a sing-along.  As the last of the champagne bottles was emptied out and yawns started appearing on the faces of our friends we thought we'd call it a night and head home.  The highways were deserted with not a police officer in sight and all seemed too quiet for comfort.  But as we pulled into our little Panamanian neighborhood the houses were rocking with music from three different directions.  We crawled into bed between three and four in the morning, armed with ear plugs to muffle the music.  But even with the air conditioner on the sounds of the music and leftover fireworks ensured a rather sleepless night.....along the gringo trail.
at January 01, 2014