Today we had planned to hop on an express bus to Guadalajara but when we woke up to rain we had to change our plans. The rain subsided by 10 am but by this time it was too late in the day for the hour long trip to Guadalajara so we opted to stay close to our home away from home.  Always looking to explore more we boarded a bus headed to the village of Jocotepec pronounced (ho-co-tay-peck), or so I think. Since bus drivers here certainly don't wait for passengers to sit down before taking off, bus rides can be lively and dangerous.  This bus had a door separating the drivers cab from where the passengers sat.  As I made my way through the swinging door the bus took off and in a split second I fell into the lap of the first seated male passenger.  He helped me up as did Clyde who came to my rescue. The bus ended the route in a terminal in the little village where the streets were lined with shops, clinics and other tiny stores. 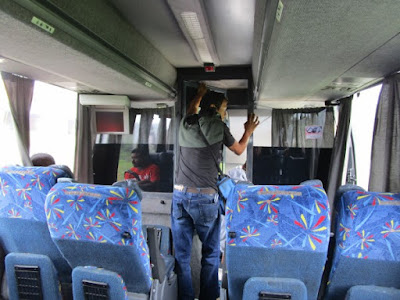 Passenger Goes Thru Door To Front
﻿

Since it was lunch time we strolled through the tiny shops looking for something to eat.  We walked into a little hole-in-the wall restaurant known as a "lonchera."  Although the proper word for lunch in Spanish is "almorzar" here the Mexican seems to blend with the English creating the Spanglish word "lonchera" 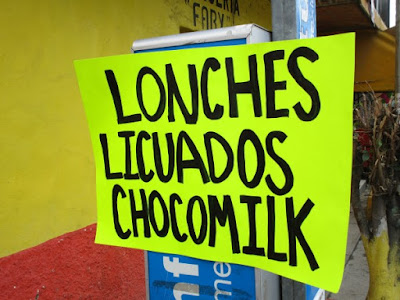 The little café was empty so Clyde yelled out, "buenas dias" and a girl approached the counter.  Clyde asked her, "usted tiene tacos?"....which means "do you have tacos?"  She looked confused and said in Spanish, "no, this is a "lonchera" so there are no tacos.  She explained they had burritos, sandwiches and other stuff and told us what types of meat she had. The message rang loud and clear in my head, one that will not soon be forgotten.  No tacos for lunchtime in Mexico?  Apparently here in Mexico they don't eat tacos for lunch, just for breakfast and dinner but never lunch? Tacos for lunch must be an American thing perhaps created by the mix of two cultures that we became accustomed to while living in Texas. 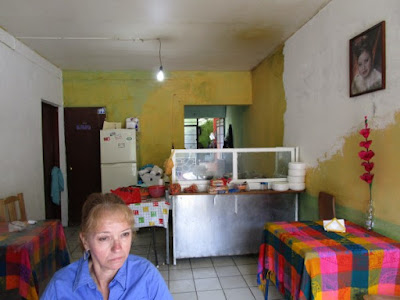 So we ordered burritos made from thigh meat.  The tiny thing was one tortilla filled with meat topped with lettuce, tomato and raw onion and served with a cheese sauce. Although tasty it was rather small but cost less than one dollar.  Since I was still hungry we stopped in a nearby ice cream shop for some cones.  What we received were two small waffle cones with one scoop of ice cream for the mere price of 33 cents each.  Amazing to think that something can be bought for 33 cents in this day and age anymore. But things really are still that cheap here in Mexico. Mexicans here seem to eat tortas or sandwiches for lunch with smoked meats, or soups with fruity drinks.

Back on the bus we took it all the way past Ajijic to Walmart again.  Our mission was not really to shop but to check out the schedule for the traveling circus that's in town across from the store. There are several performances every night at the low, low price of just "quince pesos" or less than ONE US dollar. We stopped for coffee at a local gringo looking restaurant called "Black Coffee Gallery."  Their slogan is "art and coffee made by artists. We each ordered a huge coffee with milk that was $2 each and shared a slice of cheesecake that cost $3.50.  While indeed pricey by Mexican standards this place was far cheaper than it's look alike Starbucks. The poshly decorated café was full of artsy touches, comfy chairs, free WIFI, cool a/c, clean and modern.

From there we ducked into a nearby casino to throw away a few pesos on slot machines.  First we had to approach the cashiers window and present some form of identification.  Clyde handed the man our photo id cards from Panama.  The man typed the information into his computer and eventually issued us each a plastic card to use in the machines. When we wanted to add more pesos onto the card a traveling attendant was able to add money from a hand held machine.

After picking up a few things from Wally world again we paid our 10 cents each for the bus ride back to the house. Hard to imagine they could even operate the bus lines with fares that low.  By the way gasoline prices here are around four dollars a gallon, something that's not cheap here. 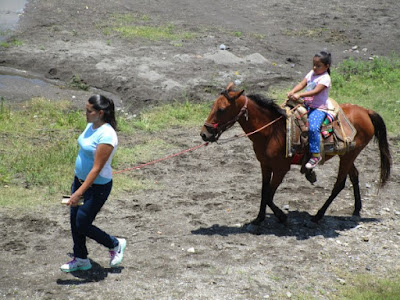 Momma walking her girl on a horse 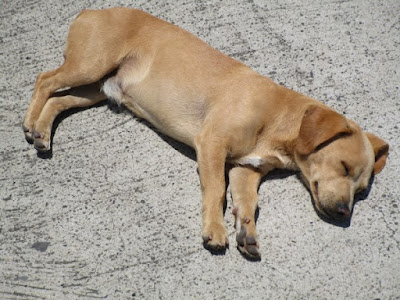 We always have to beware of the mean street dogs
﻿

The sounds outside this house are comical and varied.  From hearing English spoken by transplanted gringos to the clomping of horse hoofs on the cobblestoned streets.  There are children playing and chatting in Spanish and the musical sounds of gringo bands from a nearby bordega.  We have a little of everything right outside our door as we relax and enjoy a siesta in Ajijic, Jalisco, Mexico....along the gringo trail.