Roughin' It In Mexico...Soaking It All In

Just imagine soaking in hot thermal pools of natural water surrounded by majestic mountains with a cool breeze running through your hair.  Well while the rest of the world was hard at work we were doing hardly nothing basking in just such as atmosphere.  It was rough but like they say, "somebody had to do it." 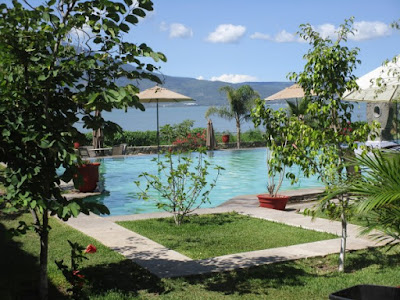 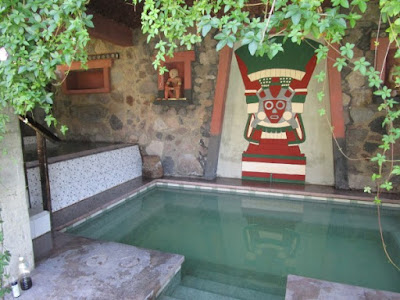 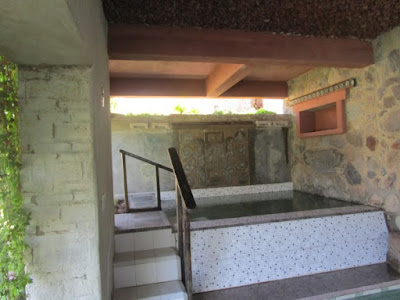 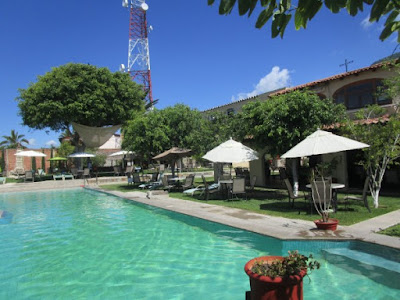 ﻿
Another View Of Pool

Our day did begin abruptly when the resident cat jump into bed with us meowing loudly and nuzzling up against us.  After giving her some lovin' she decided it was time to head outside which seems to be her favorite place in the world. But her owner approves of her gallivanting so before we left for the day we let the cat out, knowing all too well that she'd be ready to come in once we returned.

We hopped on a bus early in the day and headed toward the town of San Juan Cosala to find the thermal baths.  Before long we saw signs indicating that we'd approached a row of hotels capitalizing on the natural springs that bring millions of tourists to the area.  As we approached the first resort we were encouraged to come in so that's just what we did.  I noticed noisy families with kids splashing in the hot pools, so we turned and left.  Down the road a bit we spotted another one that seemed quiet so we ventured in.  A Mexican worker invited us to look around and tried his best to explain each of the attractions to us in Spanish.  The place was just lovely with a large pool surrounded by smaller pools, hot tubs, saunas, waterfalls a restaurant and more. 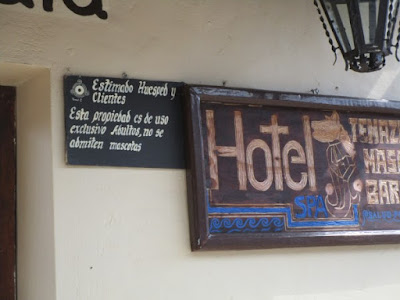 We approached the reception counter to inquire about price, quickly paid and began our relaxing day.  The total cost for entrance was around $45 for both of us, plus a deposit to borrow two towels that would be returned upon their return.  The place was almost empty with maybe 10-12 people total plus the workers who were very attentive and helpful, although most spoke only Spanish.  Along with a few other gringos the clientele of the resort was mostly well to do Mexicans from Guadalajara. We only know that because we chatted with one couple in Spanish. For lunch we enjoyed a chicken burrito that was served with a salad.  Clyde and I split the whole meal which was plenty for the mere cost of $6.  Since we had room to spare we ordered desserts although we really didn't know what we were getting.  Turns out it was a cake made with a special type of palm nut that grows only in Mexico, or at least that's what the waiter said. It was sitting in a pool of sweet goodness made from something we can't remember but it was tasty. 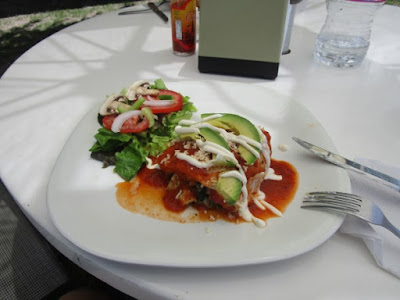 Chicken Burrito For Lunch With Salad.....This Was Half Of The Meal
﻿

A while later Clyde ordered a beer and was served Corona with a salted lime, just like in the US.  The past few days here in Mexico whenever Clyde asked for a local beer he as also given a Corona but never with a lime.  Hmmmm  I wondered is this just a gringo thing?  Or do Mexicans really put a lime in their beer?  So when the English speaking waiter served it I asked him, "is the lime a gringo thing?"  Without a thought he immediately said, "oh yeah we don't drink it like that."

As I continued chatting with the personable waiter I asked him what the meaning of "cosala" was in the name of the hotel and spa.  He went on to tell us the whole story.  There was a king named Cosala who once ruled the town that sat where Lake Chapala is now. As the town grew too big he ordered residents to move elsewhere, worried that from heavy rains someday a lake would form. He was right and as the years progressed the rains came and the lake was formed.  The waiter explained that the story must be real because growing up there as a kid he found artifacts in the lake bed proving that life there once existed. The rest of the name is San Juan which refers to John the Baptist. 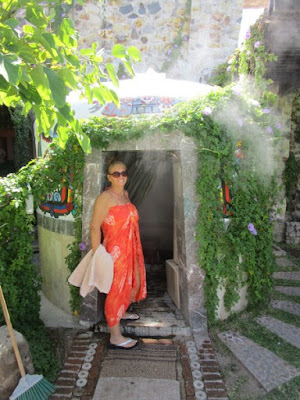 A Tiny Sauna With Real Eculyptus Leaves Over Coals 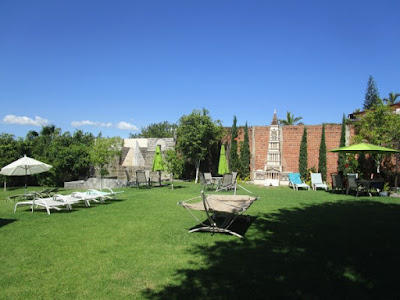 View Of The Grounds 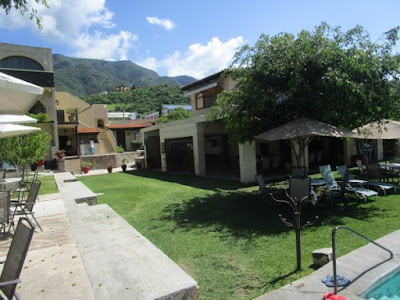 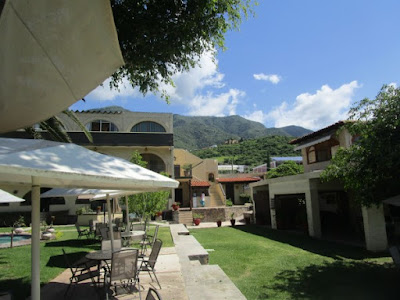 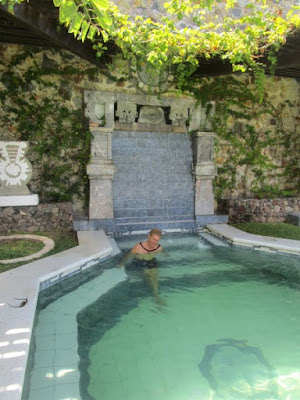 The Hot Waterfall Was Turned On 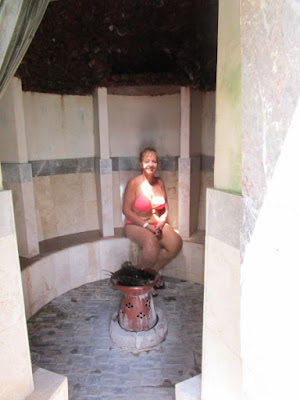 Inside A Sweat Box 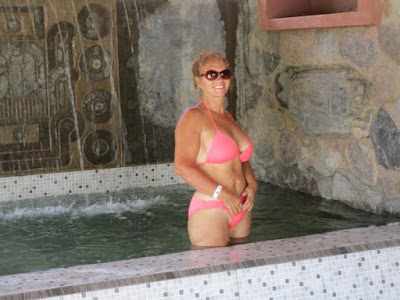 In A Smaller Hot Tub 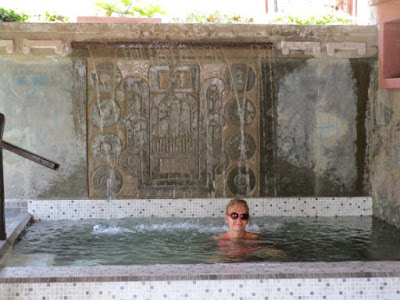 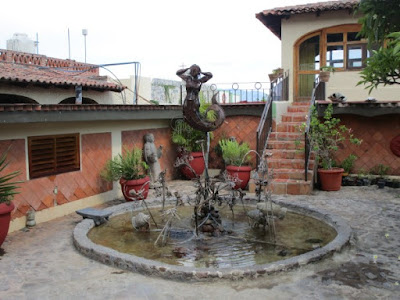 Clyde explained to the friendly waiter that we were from the US but retired to Panama.  The waiter said, "why didn't you move here?"  We explained that we never knew this area existed before now.  The waiter gave us the statistics that the town of Ajijic is 50% gringo now and the other surrounding areas are 35% gringo and growing more every day. Alarming statistics especially when you consider that most Americans are afraid to even visit Mexico, let alone live and buy property there.  Yet there are tens of thousands of gringos retired here living a rewarding, enjoyable, more affordable life.

A note about yesterday....while hanging out in a gringo part of Ajijic, a nice plaza full of gardens, walking space and restaurants we noticed the following.  We walked by a table selling medications and I remarked to Clyde about them pushing drugs in the streets.  Of course these were legal drugs and nothing that couldn't be allowed in public.  It was just funny to see it being sold on a little table alongside a park.  We stopped for a drink at a local restaurant and heard nothing but English spoken around us at other tables. A while later someone began giving a sales pitch through a microphone offering up a FREE box of Omeprezole, a drug used for stomach upset, heartburn, GERD etc....  So Clyde went over to the table, had to listen to a five minute explanation of how the drug was used and he walked away with a free 30-pack of the medicine.  But not to worry.....he was sure to ask the salesman IF the drug was FDA approved otherwise it surely wouldn't be fit for human consumption.  We get a big kick out of these programs and news shows that forbid Americans from using any medicines that are not approved by the FDA.  Really?  Well then HOW does anyone not living in the US ever get a medication to use?  We use drugs in Panama prescribed by our doctor that are surely not approved in the US but are perfectly safe to use.  Our drugs here seem to come from Costa Rica, Colombia or other Latin American countries at much lower prices than those in the states. 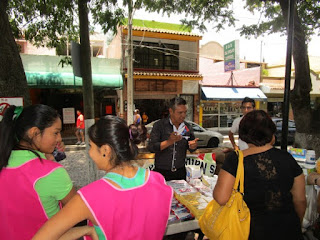 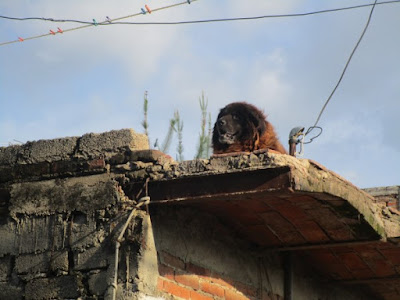 Is That A Bear Or A Dog?  It's On A Roof Of A Neighbors House 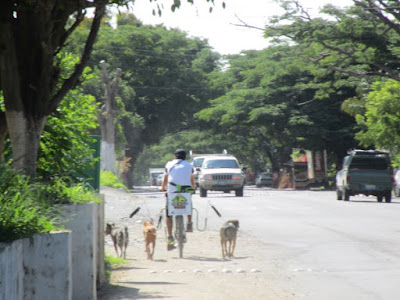 A Professional Day Walker.....Mexican Style
The Sign On The Back Of His Bike Says "Dog Walker"
Notice The Nifty Device That The Leases Are Attaches To 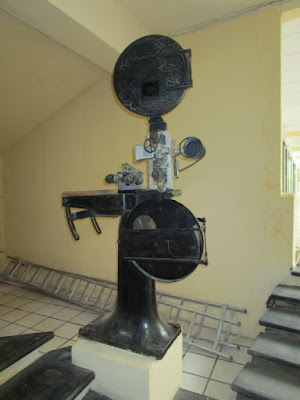 Outside A Local Movie Theater 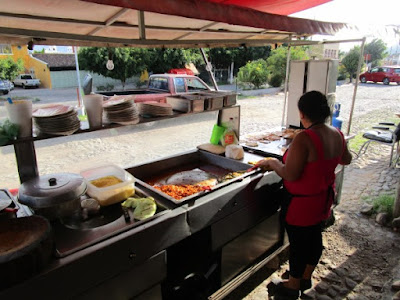 Roadside Taco Stand That We Liked 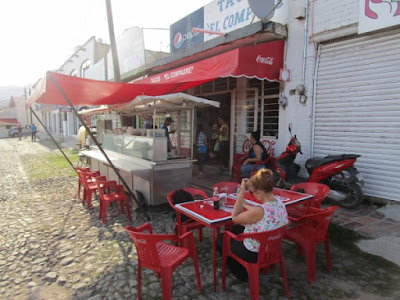 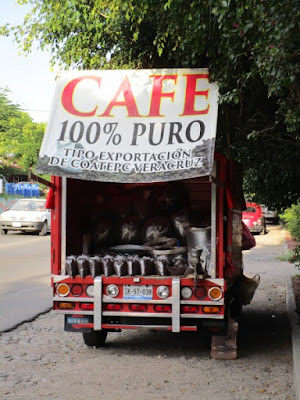 Bought Coffee From This Guy....Grown In Vera Cruz
﻿

I'll let the photos of todays excursion speak for themselves.  And so another day comes to an end after relaxing in hot, thermal pools of therapeutic water all day in the mountains of Mexico. Who knows what tomorrow will bring but surely it'll be something fun and exciting full of tacos, tequila and more rough times.....along the gringo trail.
at July 16, 2015