The Perdicament Of Pesos And Other Peculiarities In Mexico...

Since we've been in Mexico we've tried to mentally convert Mexican Pesos to US dollars just to have an idea of what things cost and how much we're spending.  For instance as I type this I'm looking at a bag of tortilla chips we bought at Walmart last night that's sitting nearby on the counter top.  The price marked on the bag is $32.40 which makes my cheap brain scream, "yikes, we paid that much for a bag of chips!"  But do the conversion to US dollars and we only paid $2.06 for a bag of store made fresh tortilla chips. 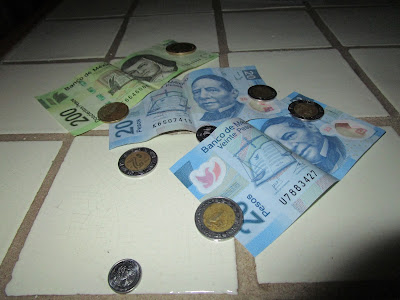 Walking around Walmart there were no racks with price points like $5.00 or $10.00, instead the bargains were clearly marked $50 or $98, for a blouse or pair of jeans.  But $50 pesos translates to just $3.18 US and that $98 pair of kids jeans are only $6.24 US.  Today for lunch we spent a whopping $90 pesos but in reality it was $5.72 for three shrimp tacos, rice, salad and two drinks for both of us. To get around we've been walking more than using the bus system because we don't want to splurge the astronomical 80 pesos each to ride the bus. Translate that and it comes to 0.101 for the two of us which is SO small of an amount I can't even understand what it means?  But in other words the bus is CHEAP! Clyde was looking for cookies to buy and noticed an end cap with some boxed peanut butter cookies.  The sign on the display said $10 and Clyde happily shouted out, "those are only 60 cents a box, let's get some."

And when we noticed a cute young man giving out alcohol samples in Walmart we thought we were back in Panama.  He had four bottles in front of him and offered us whichever one we wanted, if not all of them.  Clyde tried a shot of some type of mezcal while I sampled Bombey Sapphire, a blue colored flavored gin. Mine was tolerable although strong since I'm a light weight and I was soon feeling happy.  At the checkout Clyde handed me his shot to hold while he paid the cashier, but it took longer than expected.  Somehow, in some unknown way the mescal fell into my mouth and I swallowed handing Clyde back an empty shot glass. Fortunately I was stable enough to stagger outside and across the highway to the bus stop. The bus ride back to the house was lively and brought me back to reality quickly.  The buses here turn down the side streets that are ALL covered in rough and rugged cobblestones making for an interesting ride. 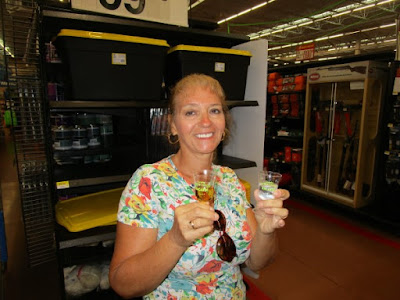 
Our first day in Mexico when we arrived at the airport Clyde needed to get pesos from an ATM machine at the airport using his debit card.  He put his card in and pressed $500 to receive 500 pesos. I had to break it to him that he just collected a whole $32 dollars US which surely wouldn't get us too far! The number shock is everywhere for us and messing with our heads, although certainly we won't complain about paying too little for anything.

Yesterday while sitting in an open air restaurant in a very gringo part of Ajijic I noticed a Mexican boy.  He sat at a nearby table eating fruit and collecting money from people that walked by.  After a while I realized that he was the bathroom attendant.  The sign behind him read $4 for use of the bano.  Outraged I thought to myself, "well at least they have public restrooms here, but to charge $4.00."  Then I realized that $4 pesos is merely a 25 cents to us, something we'd easily loose in the washing machine or under the seat of our car. 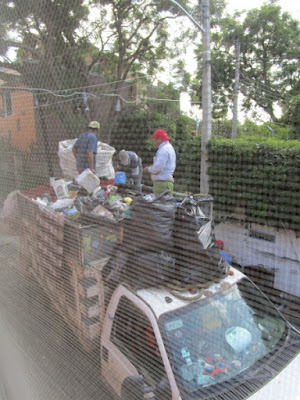 Picking Up The Trash
Clyde Watched Today As They Sorted The Trash Wearing No Gloves
And Like Panama....Toilet Paper Is NOT Flushed Here, So Poopy Paper Was In There Too
﻿

Since this IS Mexico the water is NOT drinkable, or so the gringos tell us.  The kitchen of the house we're watching has a 5 gallon water bottle that's used for drinking water.  The owner of this home doesn't even wash produce with the tap water unless it's laced with iodine. But since Clyde and I easily go through two gallons a day or more, we needed to replenish the supply.  Today Clyde ran outside when he heard the water man come around yelling, "agua." He turned in an empty five gallon bottle and bought a full one from the man for $16 pesos or $1 US.

Today we took our cheap selves to the city of Chapala once again to do some more exploring.  Since it's too far to walk we had to spurge on the bus and hopped off near the malecon.  The malecon or walkway goes around Lake Chapala and is lined with vendors, shops, restaurants and more trying to get money from Mexican tourists. Yes I did say Mexican tourists since we were the only ones for miles speaking English.  But on the other hand we were NOT the only white folks since many of the Mexicans around this area are even whiter than we are.  It's been hard to tell who's a gringo and who's a Mexican since there are so many fair skinned locals. 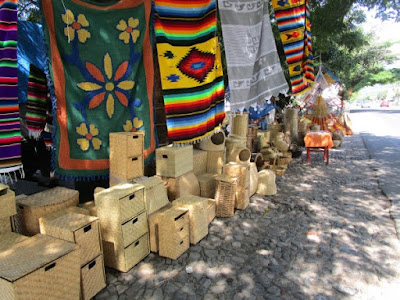 Stuff For Sale At The Bus Stop 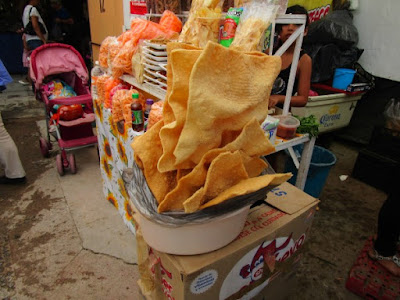 Gigantic Chips? Saw These At A Roadside Vendor 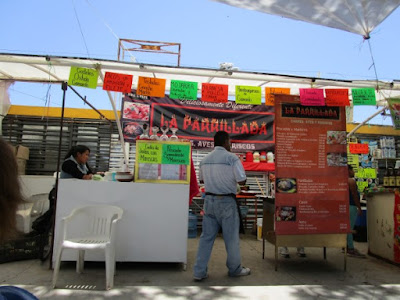 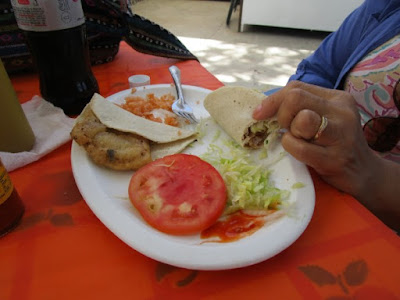 Shrimp And Fish Tacos, Salad, Rice...This Is Half The Whole Meal 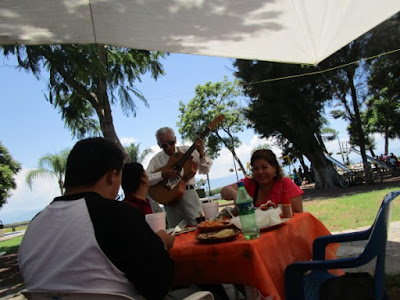 Clyde read about a boat ride that goes from the malecon to Isla de Alacranes,  Scorpion Island so we asked and took the plunge.  Our driver led us to the boat which probably held a dozen or so people.  But for this trip is was just the two of us.  The cost for both of us was $390 pesos which translates to about $25 total.  The ride to the island was nice but didn't take too long, maybe 15 minutes each way.  As we approached the island we noticed several restaurants and the staff was eager to take our money. Our boat driver told us that the price of $390 pesos was for ONLY 30 minutes on the island.  If we wanted to stay longer to eat the price would be more, plus the cost of food of course.  So we decided to just look around and leave eating lunch for later in the day.  The tiny island was really a tourist trap with nothing much on it but restaurants and vendors selling stuff. We took a few photos, walked around, looked at the lovely view of Lake Chapala and waited for our ride to the main land. 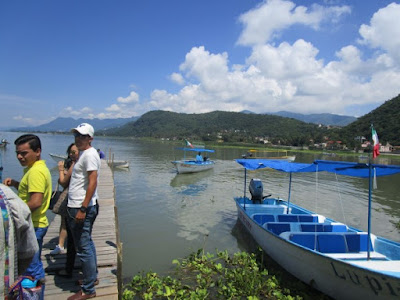 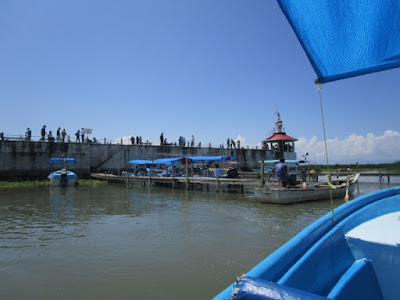 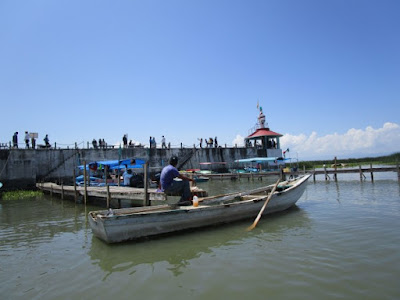 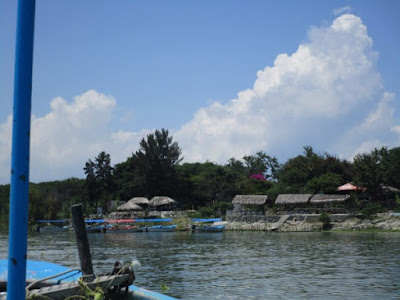 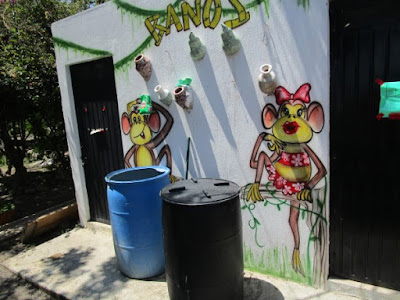 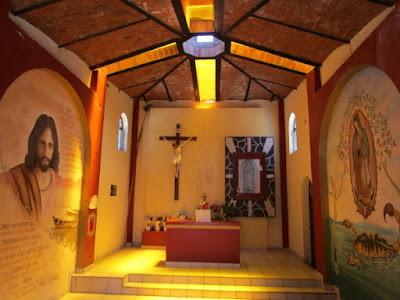 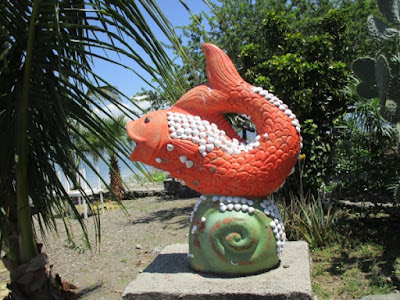 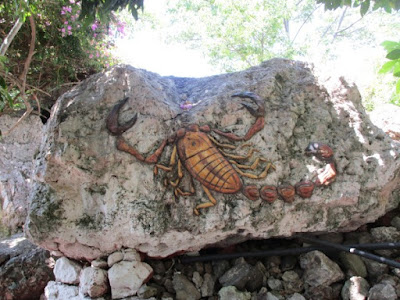 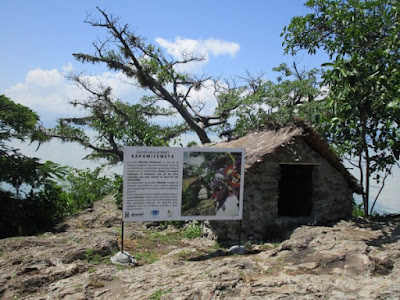 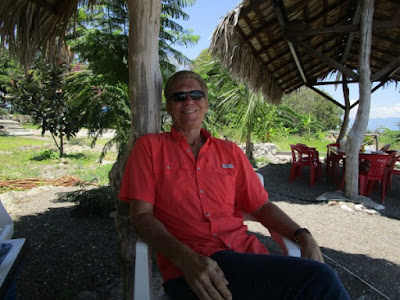 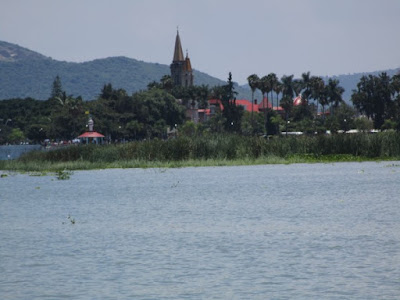 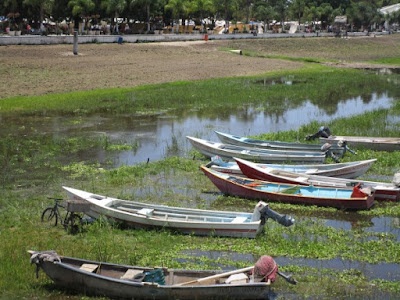 Back in the city we walked around some more, stopped for helado (ice cream) and headed back to the casa by bus.  Since we're staying just two doors over from a gringo bar and restaurant called "The Bodega," most nights we've had music to listen to whether we wanted to or not. Time to heat up some left over chicken that we'll make into fajitas, served alongside some pico de gallo, and our $32 bag of chips.  Clyde ran to a nearby small store to buy an avocado.  He came back with two avocados and some home made salsa for around $1.60.  Surely we'll save room for a margarita later on as we drift into the sunset of Mexico......along the gringo trail.