From The Beaches To The Rainforest Of Costa Rica.....

On Sunday we hopped into our borrowed wheels and headed over to the popular beach town of Jaco  pronounced Haco. We'd already been to Jaco once when the homeowners were still here.  They wanted to show us around and make a pit stop at the vet and pool store. The popular tourist town was jam packed with people enjoying a weekend on the beach with their families.  The waves were massive as we watched some surfers try and catch a wave under the hot, tropical sun.  Although the area is lovely with the vibe of a lively tourist town, the beach was covered with a gravel type of sand that we didn't care for. 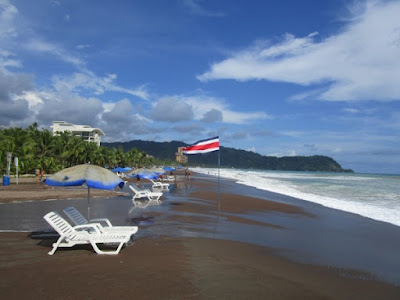 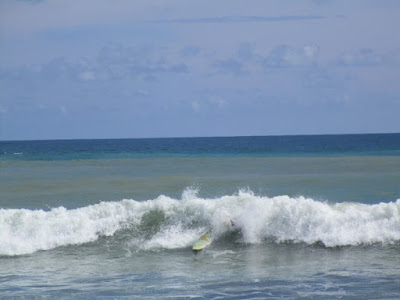 A Surfer Catching A Wave 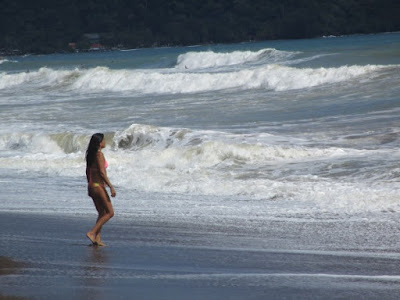 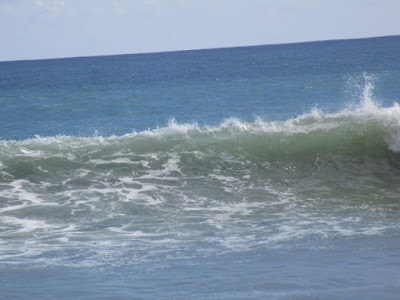 We headed out of town and stopped in the quaint little village of Esterillos Oeste, a busy little surfing village with a few shops and restaurants. Since it was lunch time we found a spot to eat that was located in the midst of tiny shops offering surf lessons and tours of the area. Along the way back we checked out a few other beach villages that were all packed with the weekend crowds. 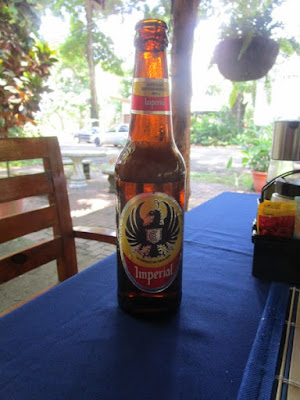 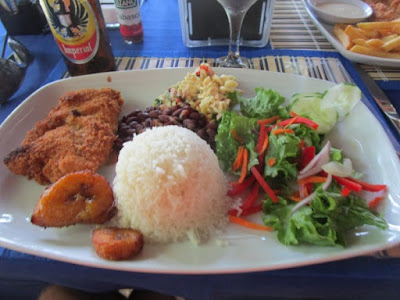 Yesterday we woke up bright and early to get ready for a tour of the rain forest.  Our guide arrived here to pick us up at 7:45 am.  I began to worry since he was dressed in jeans with rubber boots on, which led me to believe he was taking us to some wet terrain.  We learned his name was Rafeal or at least that's what it sounded like to me.  He spoke no English at all and this would provide us with a great opportunity to practice our Spanish. First he said he needed to stop at the store to buy food for his tilapia.  Then he stopped at another store to buy fish filets that would serve as our lunch later in day.  Finally he made his way onto the highway and drove about 30 minutes before turning off the road.  His stopped at a tiny house nestled in the woods which would be our first stop of the day. We soon learned that this was where he lived as he introduced us to his wife and several kids.  His wife offered us coffee and later served up some ham sandwiches on white bread with butter.  Although we had recently eaten breakfast we didn't want to seem rude so we ate the simple sandwiches and drank the strong Costa Rican coffee. Rafeal showed us around his property that sat nearby a raging river. We watched as he fed the tilapia that were hidden in a pond full with overgrown plants.

Finally he was ready to show us around the rain forest which just also happened to belong to him and his brother.  Off we went as his old Toyota SUV climbed high into the mountains, crossing river beds that sat beside waterfalls, all of which were cove 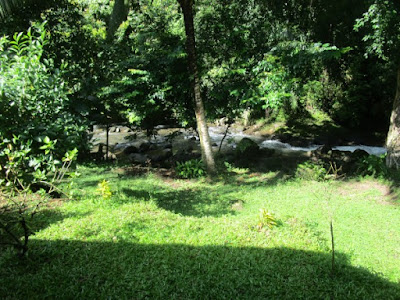 Deep In The Rain Forest 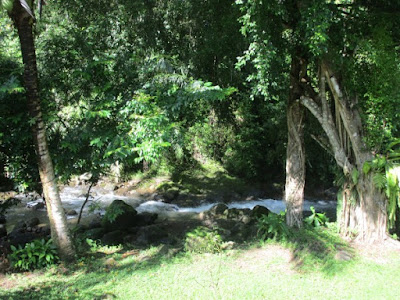 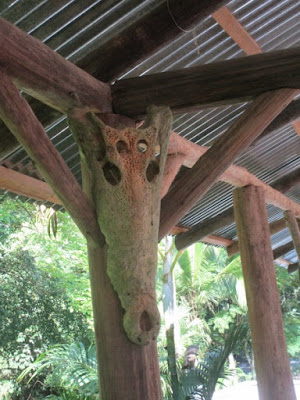 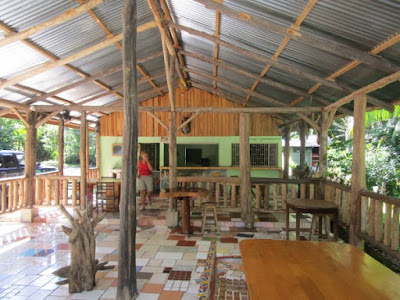 Outdoor Terrace At Home Of Our Guide In The Jungle 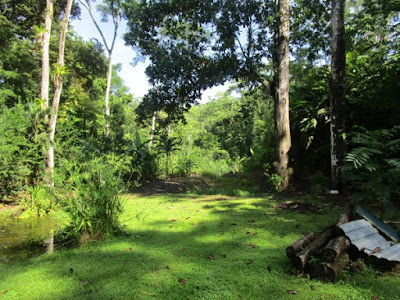 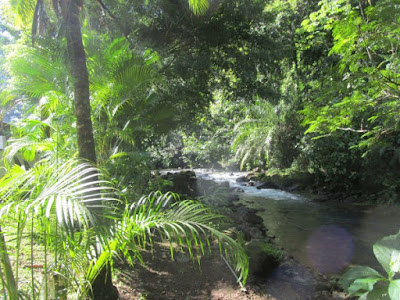 River Behind The House Of Our Guide
red with thick mud from the recent rains. We got out and begin to climb the steep, muddy hills through the jungle to look at the beautiful surroundings.  Our guide helped me ascend the steep terrain while trying not to slip in the mud or even worse fall off the edge of a cliff.  Eventually he used his machete to cut off a tree branch and trimmed it into the walking stick for me, which did help greatly 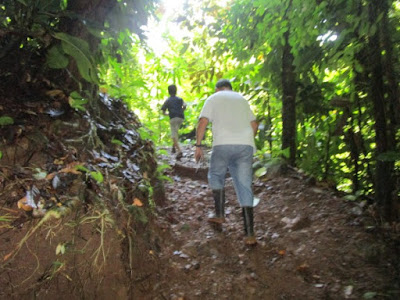 Our Guide And His Son Lead The Way 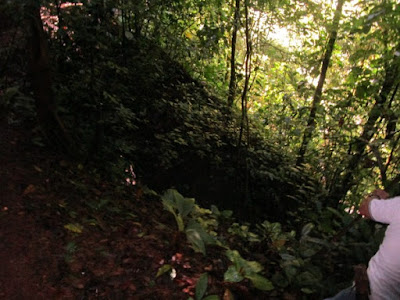 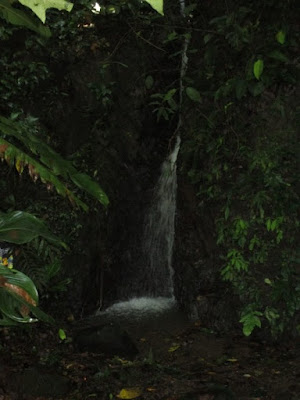 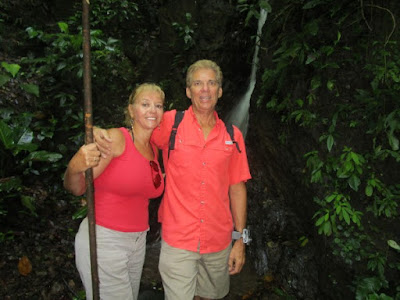 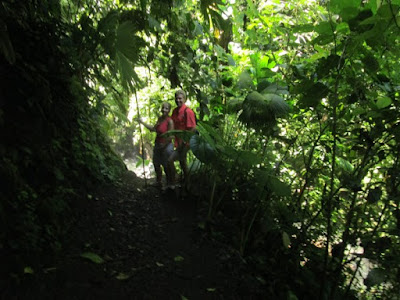 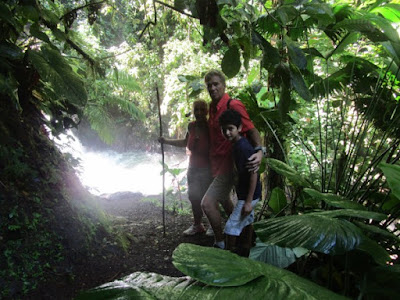 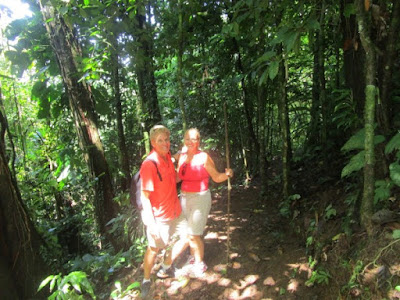 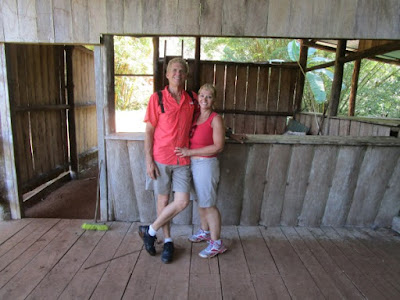 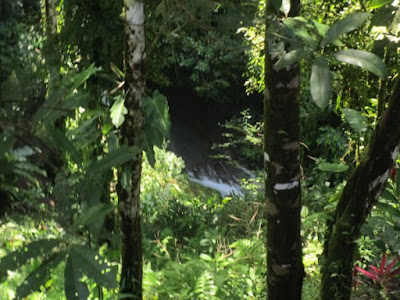 Once we had enough of the jungle he took us back to his house where his wife prepared us lunch as we listened to relaxing music.  Our lunch was a nice presentation of fried fish, mixed vegetables, salad, beans and lemon aid.  By the time we finished lunch we were getting tired of trying to make small talk in Spanish.  Although we did manage to understand most of what he was saying, surely our Spanish teacher in Panama would be proud of our accomplishments. So we suggested that he take us back to our borrowed casa as we bid farewell to our newly made friend and tour guide.

Meanwhile back at the house we were feeling tired and sweaty.  After a cooling off in the pool we rested a while before deciding on our next move.  Clyde had left the tailgate down on the pickup truck we'd been using and we quickly noticed that Bolle the German Shepherd was sitting in the truck.  Whether we wanted to go walk the dogs on the beach or not, Bolle was NOT moving out of the truck so we knew we'd have to go for a walk.

After returning from our beach walk we headed into the tiny town of Parrita for some dinner and a few groceries. Cute story as to how the town got it's name is as follows.  Many years back a woman named Rita lived here and owned a business.  Whenever she received mail the post office would ask who's this for?  Someone would always answer, "para Rita," which means, "for Rita," in Spanish.  That was slurred together to sound more like, "parrita" and the name just stuck.  Just like Panama the country of Costa Rica has no door to door mail system. There are tiny post offices here where people can pay to have a post office box, but from what we've been told it's not reliable.

Today we headed along the highway again to do some exploring when we came to traffic totally stopped.  Assuming that there was an accident up ahead we sat and waited among the line of other cars, buses, motorcycles and trucks. Nearly two hours later Clyde chatted with a gringo tourist that happened to walk by. The tourist went to ask the police what was going on only to discover that none of the police spoke English.  But from what the man did get out of the conversation was the phrase, "hasta manana," or see you tomorrow.  Tomorrow?  Really?  Would we be stuck here that long?  It seems that there was some sort of demonstration or road block preventing traffic from moving any further along the highway.  So Clyde managed to turn the truck around and head back to the house and call it quits for today.  Roadblocks are also common in Panama as a way to gain attention of the police and government by cutting off access from one part of the country to another. Unfortunately for Costa Rica this also blocked hundreds of tourists from getting to popular tourist attractions with their money.

But as we say in Latin America there's always tomorrow or "manana" which to the locals doesn't mean tomorrow, it just means it's not going to happen today. So for now I'll end this blog and write again manana......perhaps as we explore more of Costa Rica.......along the gringo trail.