Went To Jaco For A Taco And Spent A While With The Crocodiles.....

Today was the first day that we woke up to rain instead of the usual thunderstorms at night.  But it soon subsided and we were free to head outdoors and explore. After our morning walk on the beach with the dogs Clyde suggested that we hit the road to find the famous Rio Tarcoles.  Located outside the town of Jaco the river is known for it's many American crocodiles that call it home. We parked the truck and made our way to the bridge where the other tourists were standing only to be amazed by the view below.  At any one time I counted 25 huge crocodiles floating in the water below with a few sunbathing on the shore. Rumor has it that this river has the largest concentration of crocodiles per square foot in the whole world. 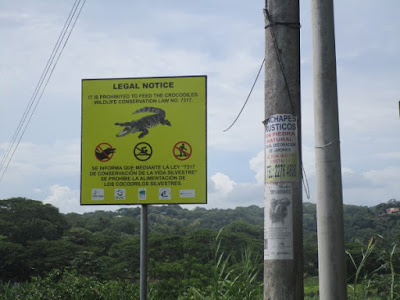 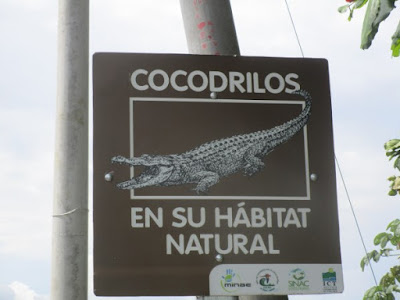 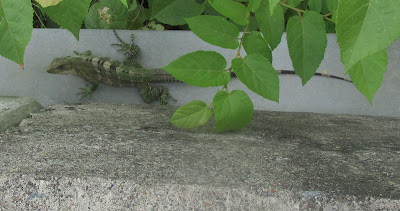 Spotted A Lizard Nearby Too 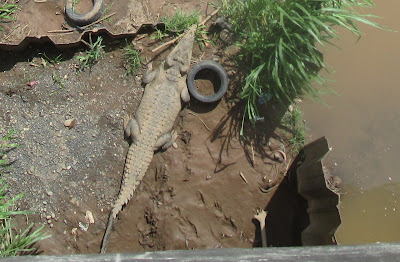 Sunbathing Crocodile...That's A Full Sized Tire Next To Him To Give You An
Idea Of How Big He Is 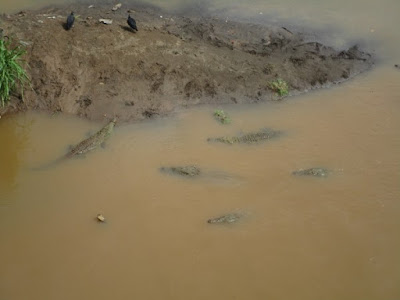 After we'd taken enough photos of the gruesome creatures we headed into Jaco where we knew we could pick up a taco for lunch.  Seriously though, Jaco has no shortage of taco joints that opened up apparently just because the two words bring a smile to ones face. Our first stop was Jaco Taco which was closed down perhaps since it's on the far end of town where no one goes? From there we remembered another taco joint from our last trip there.  An open air restaurant called, "Tacobar," specializes in fish tacos but also has a variety of other things on the menu. We settled on a two taco dish to share.  Clyde's taco was spicy tuna while mine was coconut shrimp. Included along with all meals is the famous salad bar that includes taco toppings, salad fixins, breads and even French fries. The food was really tasty and different but a bit expensive since Jaco is a touristy town. 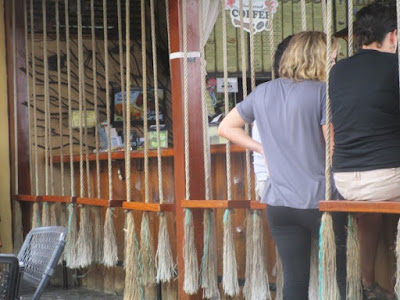 Jaco's Tacobar Restaurant With Swings Instead Of Barstools.......Just A Swingin' 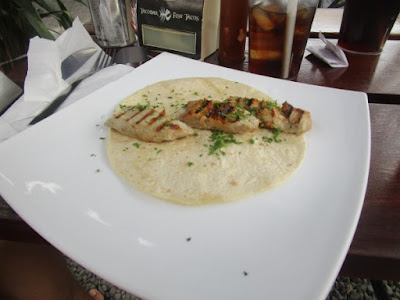 ﻿
Clyde's Taco Before Toppings Were Added

If you remember my last blog about the Tico lasagna with ham, chicken, beef and vegetables that was a bit odd?  Well last week we stopped in the town of Parrita for a pizza and noticed that the only choice on the menu was "jamon y queso," or ham and cheese pizza. Clyde asked if there were any other options and was given a menu with other varieties.  He looked at me and said, "how about a Hawaiian?"  "Sure," I said, "but you do realize all they're going to do is top one of those ham and cheese pizzas with pineapples?" The pizza was better than I expected it to be which is always a pleasant surprise.

After we finished with the crocs and the taco's we headed back along the highway to visit a few more beach towns. While all of the beaches here are different in their own ways they all sit along the Pacific ocean. We visited a few others, took some photos and headed back to the casa to tend to the dogs. 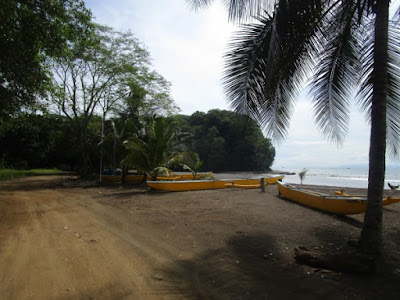 Kayaks For Rent On A Beach 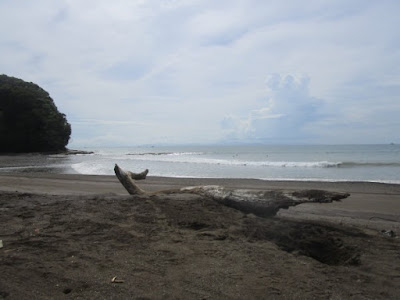 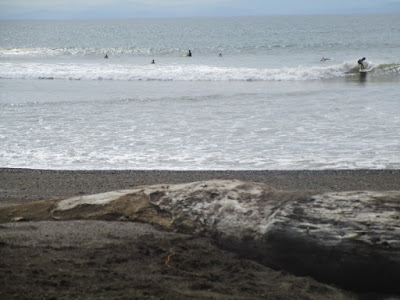 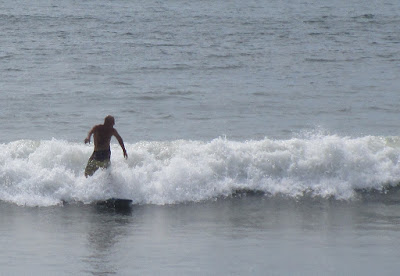 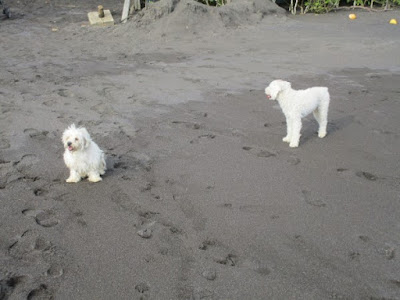 Two White Puffballs Getting Dirty In The Sand 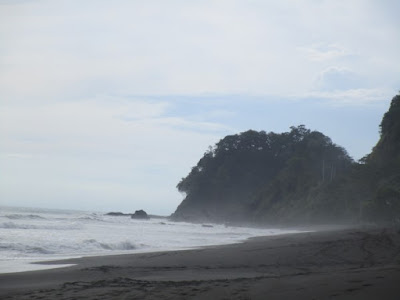 Clyde took some amazing photos of the crocodiles as well as beautiful scenery of this lovely country. While similar in some ways to Panama, Costa Rica is cleaner and more geared to tourism. All roads seem to lead to the beaches that are easy to find and clearly marked.  So sit a while  to enjoy the crocodiles that hang out under the bridge of Rio Tarcoles, Costa Rica.......along the gringo trail.
at September 04, 2015