Oh My, Clyde Drove Over A Sleeping Policeman In The UK

How refreshing to be spending five months in a country that speaks the same language as we do.  From five year of living in Panama among Spanish speakers, then three months in Italy and now finally English. While we do technically speak the same language as the British, there are accents to contend with and then those funny British words. 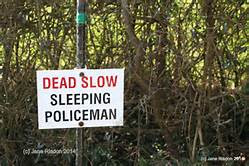 Here we drive on the motorway  which can be a single or dual carriageway, and taken up by lorries or trucks transporting goods. On the roads we give way instead of yield and lay by when we need to pullover and let traffic go by. Traffic goes through round-a-bouts which seems to be the most efficient way to keep things moving. 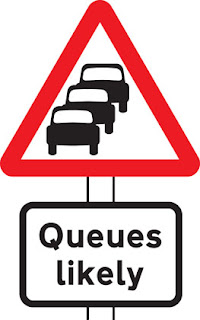 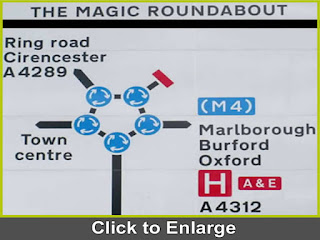 Backwards Brits drive on the left side of the road where the right lane is the fast lane and left is not. Even most walking here is done on the left in order to stay out of the way.
And when crossing the street we always look for the zebra marked by the large white lines indicating the cross walk. The most famous zebra is the one on the corner of Abbey Road in London that was featured on the Beatles album back in the day.

Heavy traffic can cause queues likely and it's legal to run over sleeping policeman here since that's what they call speed bumps. If Clyde was from the UK he might have worked for the Fire Brigade where he would have driven a big red truck with a bright yellow checker board pattern on the side.  And when it came time to put out a fire he would need to search for the bright, yellow signs along the ground displaying a big letter H.  The sign would tell him how many meters to go to find the water pipe, since there are no actual fire hydrants here.

Many stores here advertise, "off license" which means they sell alcohol that must be consumed elsewhere. And when we have a headache we buy some paracetamol commonly knows as acetaminophen in the US. And when we cut our finger we run and get plastered, instead of a band aid. Sometimes we can find such things at the pound store similar to a dollar store. Although the monetary unit called the pound it is also called a quid to cause more confusion.

Beef is minced not ground and icing sugar is used just for that. Nappies are used for babies bottoms and not something one takes in the afternoon when tired. But when babies are tired they are put into a push chair like a stroller to take them for a walkie.

We use the loo or WC (water closet) for a wee after enjoying yet another cuppa  tea. Then we follow the signs to "way out" or "way in" to find wherever we want to go.

Instead of doing it right now we do it straight away or get on with it, and when we're being a bit cheeky or sarky we're being a smart arse. We try to keep our peckers up, (chin up, be positive), about how much we weigh in stones and pay for our groceries with pounds. The public car park might be near a priory, or church building which could also be close.  And just because something is close doesn't mean it's nearby, but instead refers to a dead end street or the land near a church.

There are some lovely beaches in the UK and while some are sandy others are shingled, British slang for covered with pebbles and rocks. When we get shingles on the floor we sweep them up and put them into the dust bin. Rubbish on the other hand is something worthless or untrue, and not something to be discarded in a bin.

At the local pub one can order a heaping of chips or fries served with either fish or bangers (sausage). It can be purchased as take away or to eat there. Wash it down with a fizzy drink or soda and wipe your greasy fingers on a serviette more commonly called a napkin. A meal is not complete without a pud or pudding, the commonly used word for a sweet treat. And dirty dishes are cleaned up with washing up liquid instead of detergent.

The holidays were a festive time here where everyone was dressed up in their Christmas jumpers, or sweaters to the rest of us.

While there are plenty of sleeping policeman here the awake and real ones are rarely seen because traffic is monitored by cameras.  In fact most everything is monitored by closed circuit TV cameras in the UK.  There are some SIX million cameras that watch everything, yet the only ones noticeable are on the motorways. 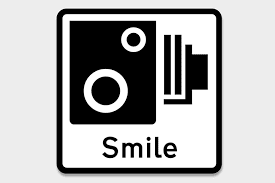 The chemist dispenses drugs and gives flu shot jabs in a pharmacy while a barrister, our equivalent of a lawyer, can argue a case in either a higher or lower court while wearing a wig.

Porridge or oatmeal is something commonly eaten for brekkie, the first and most important meal of the day. Other common breakfast foods are crumpets, similar to English muffins, or scones filled with clotted cream and jam.

Our current house sit has lasted a bit longer than a fortnight, or two weeks. Soon we'll be off to our next destination using our hired car or rent car. The current car we have is a Citroen Cactus diesel that is supposed to get 61-83 miles per gallon of petrol. Cars here get much better mileage than US cars perhaps since both diesel and petrol averages $6 per gallon here.

We meet new mates along the way while it's bloody, cold, damp and gray.  Blimey I say as we pop into bed for the night, more adventures tomorrow and from the UK,  a good night......along the gringo trail.