The Famous Cliffs Of Howth, Ireland......

Howth Head was immortalized in a short story by James Joyce's called, "Ulysses." It was here that Leopold Bloom proposed to Molly who said, "yes," the start of a blooming romance. Joyce refers to Howth in other works such as, "Dubliners," and "Finnegan's Wake," which turned out to be his final work. The Famous Cliffs Of Howth Ireland 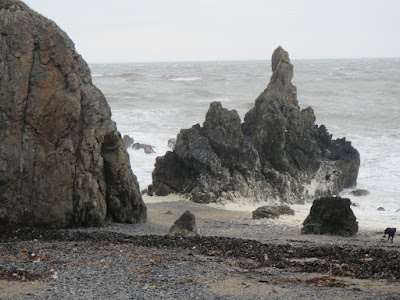 Considered to be the most beautiful coastal loop in all of Ireland, it features several light houses, ruins of an abbey and spectacular ever changing views of the rugged peaks and Irish Sea below. We are fortunate to be staying right here in Howth (pronounced with a long O sound) just a few steps from an entrance onto the cliff walks. In fact we have the opportunity to walk the dogs we are taking care of on the cliff walks daily as long as we desire.

This being our 22nd house sit we have some spectacular memories etched in our minds of sights we viewed from our temporary homes, and the waterfront vistas from this one will never be forgotten.


Just a short drive from Howth is the 12th-century Malahide Castle and gardens that sit upon 260 acres of parkland. The castle served as a fortress and private home for many of Ireland's well-to-do through the years but today is merely a well preserved tourist attraction.

The upscale village of Howth is home to several celebrities we've been told that include Bono from U2 and Saoirse Ronan, actress who starred in the movie Brooklyn. In a nearby town singer Enya shelled out a hefty sum to buy her very own castle. Other less known to us celebs walk the streets of these Dublin burb's also, although their names are unknown to us Americans.


We are loving the sights, sounds, and people of Ireland that we have encountered through our journey here. As I gaze out over the water our views of the spectacular are disturbed by the haze that has settled in creating a milky glow. As the sun sets on the horizon we give thanks to yet another day of hiking, exploring  the the Famous Cliffs Of Howth Ireland and experiencing the glorious green that is Ireland.....along the gringo trail.