On Friday morning at 8am we were supposed to be in Panama City at Clinica Fernandez, a lab having blood work done.  After that a few doors down to the Wellmed Clinic for an insurance physical which is necessary when applying for health insurance in Panama.  The blood work included all kinds of things like cholesterol, glucose, narcotics, nicotine and AIDS.  When we arrived at Wellmed Clinic to see the doctor we were told that the doctor was called away on an emergency and they would have to reschedule the testing.  The testing with the doctor was to include an EKG and stress test on a treadmill along with the physical.  They told us to come in comfortable clothing with sneakers and only eat a light snack prior to the testing.

We drove into the city on Thursday afternoon so that we didn't have to get up in the middle of the night in order to make it there by 8am.  It was about 1pm by the time we reached the city and Clyde wanted to find the clinic so he would know where we had to be the next day.  Literally, we sat in traffic all afternoon just trying to get from point A to point B.  This was a pay day for the locals so those that weren't working were out spending their hard earned money.

Earlier in the week I noticed on the "Americans in Panama" board a women posted items she was getting rid of in a moving sale in the city.  She was selling a floor steamer which I thought would be a nice way to clean and sanitize our white tile floors.  We made arrangements to meet with her on Thursday night in her apartment in the TAO building, located in the San Francisco section of the city.  The front of this high-rise was adorned with decorative waterfalls which led up to the locked front door where a guard greeted us.  Inside the lobby some festive holiday decorations illuminated the room and a nicely decorated tree stood on one side.  The lights were reflected in the shiny tiled floors that displayed some swanky, modern furniture to welcome guests.  This was our chance to see what an expensive dwelling in the big city looked like, and how the other side lived.

Upon knocking at the apartment door, we were greeted by Michelle, an Armenian women and her husband from England.  This young international couple was leaving Panama to move to Houston, TX of all places.  Both working in the aviation field, they felt as though they could find jobs anywhere in the world and didn't know where they would settle.  From Houston they would possibly go on to Ghana and then on to France, although Michelle's pending pregnancy might change that idea.  The apartment appeared to be a three bedroom and the kitchen was full of granite counter tops and high end stainless steel appliances.  Being the nosy type I asked out of curiosity what a place like that rented for.  The husband proceeded to tell me that it rents for $2700 a month but they got a "good deal" and were only paying $1700 a month.  His idea of a good deal and mine apparently are totally different and we payed our $40 for the floor steamer and went on our way.

While in Panama City we did manage to get our car serviced at Toyota.  Just the normal service routine of fluids being changed along with the filters.  Our appointment was scheduled for 8pm on Thursday night and they had three technicians working on it to get us out quickly.

Our last stop before leaving the city was Price Smart, a warehouse club that requires a membership fee in order to use to place.  Back in September we ordered two kayaks from the club online and now after a mere three months, they were ready for pickup.  After picking up some other things at the store, we stopped at the service desk to claim our kayaks.  Like everything here in Panama, this was no easy ordeal and took about 30 to 40 minutes.

The girl at the desk pulled out a huge binder full of papers and proceeded to look page by page for Clyde's order number.  Clyde was reading upside down along with her and found the order while she turned the pages.  He then handed the paperwork to me and ran to get the car and move it upfront closer to the store, while I waited for the kayaks.  In his absence the woman went on to other customers, even though I was standing there right in front of her.  I assumed she had someone getting the kayaks out of the warehouse. When Clyde came back and she noticed him, she started working on our order all over again.  Then she proceeded to charge our credit card for the full amount of the two kayaks, which we had already paid prior to ordering them online.  After she cleared up that mess she explained that someone would have to get the kayaks from the warehouse which would take another ten minutes or more.  I left to find a restroom and pickup some bottled water from the snack bar since I knew I had plenty of time.

Finally we saw a boy with two blue kayaks on a flatbed who brought them out to the car.  The boy helped Clyde secure the kayaks to the top of our car and off we went.  Traffic was still just like one big parking lot and moved at a snails pace all the way to the bridge.  Once we crossed the bridge we breathed a sigh of relief as the traffic began to move faster and we were on our way back to Capira.  Today Clyde will need to find a place to store the kayaks so they will be safe from theft and as much out of sight as possible.  As I write this they are standing up against the dining room wall waiting to find a home. 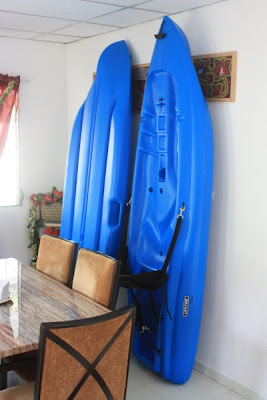 It's after 9am now and Clyde is not out of bed yet but I think he was up late.  I heard him get up last night when he opened the bedroom door, it squeaked and woke me out of a deep sleep.  Since living in the tropics is dirty having the windows open, I think a bit of cleaning is on my schedule for today.  Looking forward to trying out  my floor steamer since the white tile floors have yellowed in the bathroom and I'm hoping it might brighten them up. Yes I know that being excited about cleaning the floors is not for everyone, but for this "gringa" if the trails not clean, the gringa gets mean.  And if the floors look grubby I'll take it out on hubby. Keep the gringo trail clean without any strife, and at least for today, you'll have a happy wife and life...along the gringo trail.

PS.....written later on the same day.  The steam cleaner ended up being a lousy product!  When Clyde came home he took it apart and we ran some vinegar through it, which cleaned out the hoses and it made more steam.  Tried it again and I still didn't like it because the pad on the bottom only got warm, not steaming hot like I expected.  The results were no better than using a damp mop.  So we put it by the side of the road in hopes that someone else may want the thing for an early Christmas present.  If you happen to see the Shark S3101 Steam Mop on a tv commercial, don't buy it since it's a useless product!
at December 17, 2011