Gringos Under the Rainbow.....

Every now and then I come across some negative person that either pisses me off, or makes me stop and think, and yesterday was one of those days.

There are two groups of expats that have come to Panama to live.  The first group lives in a gated community with other expats, speaks little or no Spanish and are wary of the locals.  These people have spent $100,000 or more on American Style homes maybe with elaborate security systems.  They only deal with Panamanians as "hired help" or when they have to deal with them in grocery stores. They live in fear that the locals are out to get them, rob from them, hurt them or cheat them in some way, shape for form. 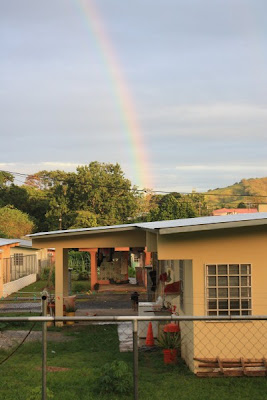 A beautiful rainbow
"El Arco Iris"
over our Neighborhood
Then there is the other group that some may think look at the world through rose colored glasses.  They moved to Panama to live among the people, learn to speak Spanish, develop friendships with Panamanians and immerse themselves in the culture.  Although this group takes precautions like locking the doors on their house and car, not leaving valuables unattended, not walking the streets late at night they don't fear Panamanians.  They buy simple Panamanian style homes without water heaters or air conditioning, that have small kitchens, no water pressure and cost under $50,000.

Those of you that know us already know that we fall into the second category of expats.  We chose to rent a nice house in a Panamanian neighborhood.  Our neighbors are locals and no one speaks English but we have introduced ourselves, shook their hands and said a few words to them in Spanish.  Every time we drive through our neighborhood we open the car windows, wave and say "buenas" to people that we go by.  Kids come by selling things as do adults and we have purchased stuff like home made pizzas from the kids and ice cream from vendors at our door.

Yes we have added a few "American touches" to our house but we try to keep it low key and not appear to be any better than our neighbors.  We do have a clothes dryer but it's in the house so no one sees it. We have added one air conditioner in the bedroom, but most of our neighbors also have these in their bedrooms.  A small on-demand hot water heater and water tank top the list of splurges that we have added to our lives here.

Maybe we are naive or stupid not seeing the locals for what they really are?  Should we be afraid like other expats are?  Will be get robbed, hurt, taken advantage of?  Our house has bars on the windows, a common practice in Latin cultures.  The house has a fence all the way around it too, with a locking gate in front.  Is this because it's not safe here, or just a precaution?  How many American homes have elaborate security systems?  There were many that I knew of when I lived in Texas, so does that mean the U.S. is not safe?  Who are Americans afraid of.....other Americans?  Are expats in Panama afraid of other expats or the locals?  There HAVE been robberies here in the GATED EXPAT COMMUNITIES.  Was it other expats in that case, or locals? And how could locals get into a private, gated community with a guard gate?  Or was it the hired help that was invited into homes by the expats?  And the guard at the gate is a Panamanian, so can we trust him?

We know other expats from the U.S. and other countries that like us, are living in Panamanian neighborhoods. They've all been here longer than us and seem to be doing okay.  They have not had any problems with the locals.

Human nature is the same in Panama as it is in the United States.  Someone making $350 a month that has less than someone making $4000 a month will be envious.  If the richer person leaves a $500 designer purse laying around unattended, the poorer person might be tempted to take it.  Right?  There are thieves and dishonest people in all countries.  They are everywhere and come in all shapes, colors, sizes and genders.  People are people everywhere!


As for us silly, simple-minded gringos we will continue to smile and treat the locals with respect, and expect to be given the same in return.  When the day comes that we live in fear, it will be time to pack our bags and hit the road for greener pastures....along the gringo trail.
at December 08, 2011