It's Official....We Are Homeowners in Panamá...

Finally today we received the documents in our name indicating that we own the house in Chame!  It's been a long three months of negotiations, opening a bank account and dealing with the Panamanian bureaucracy.  Our lawyer told us to meet with her and the sellers at the bank today at 11am.  After sitting there for over an hour, the bank announced that the check could not be issued today since once again someone was out of the office.  Things started to get ugly at this point, but since the seller seemed to know the bank owner we brought him into the mix.  Being from a prominent family in Panama City, he and his daughter talked to the powers that be and we were told to come back in a few hours when the check was finally issued to the seller.

So tomorrow it's time to have the water and electric transferred into our name and more painting, scraping and other renovations.  It will be a while yet until we can get back to normal retirement life of taking it easy.....along the gringo trail. 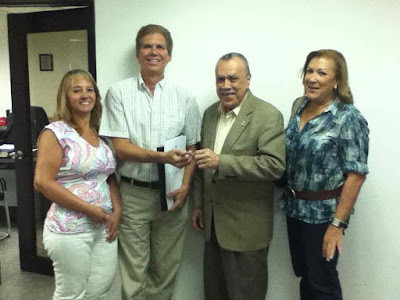 The Official Passing of The Key
Terry and Clyde with Dr. Carlos Arellano Lennox and his daughter Noris
﻿
at April 04, 2012