As the brisk night breeze gently caressed our bodies, it lifted up the ceiling tiles throughout the house.  They flapped in the breeze all night long causing a crashing sound as they lifted and fell.  Finally I had to get up and close the bedroom window, the only glass window that we have in this house right now.  The other windows are just screens with bars in the front.  Apparently our efforts to weigh down the ceiling tiles was not enough, and those in certain areas need further weight to hold them in place. 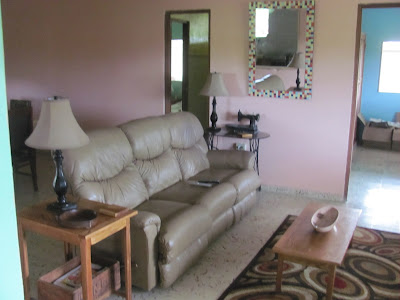 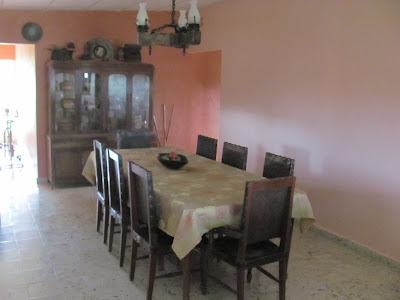 Formal Dining
Fireflies surrounded the palms and fruit trees, filling the night air with a sparkling glow. It almost seemed like the stars fell from the sky like snow, blanketing our property with a magical iridescent light.  The night sky beamed with millions of bright stars that could easily been seen through the vast darkness.  But the front of the house glowed with a few street lights, giving just enough light to see outside. 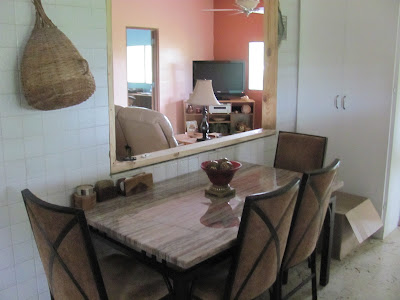 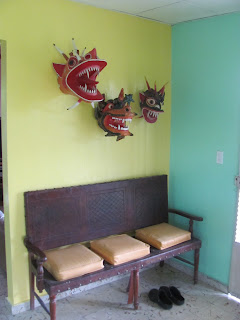 Entry Way
In the morning I was abruptly disturbed by the "Panamá alarm clock," which was a rooster crowing in the distance.  A long morning walk with the dog was peaceful in this country setting where we even spotted a small, black monkey in a tree.  Still having problems with the toilets and showers, Clyde needed to get away from the house so we went shopping.  It was "curtains" for dear Clyde since that's one of the things I was in search of, which was probably not his idea of how to spend a fun day.  Later that night our friend and now neighbor Daniel stopped over for drinks.  We relaxed the night away with some rum drinks which helped Clyde to clear his head of all the tasks that still need to be done. 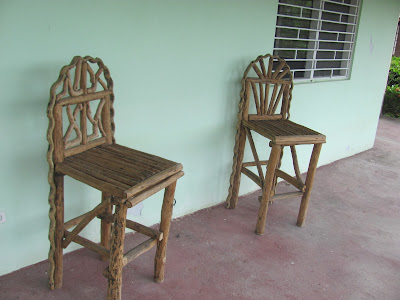 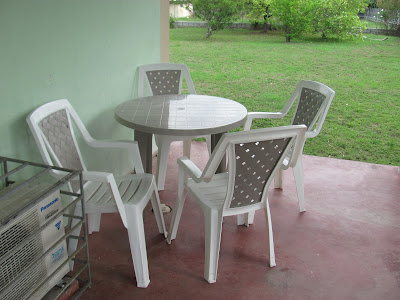 Outdoor Dining
Up with the rooster again today, although not a problem since I tend to be an early riser anyway.  Headed over to the rental house today to tie up loose ends, clean up a bit and collect a few things we left behind. 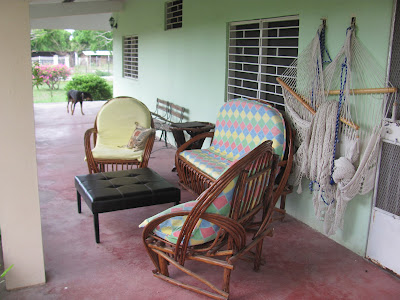 Our New Hang Out area
with Hamacas ready to go 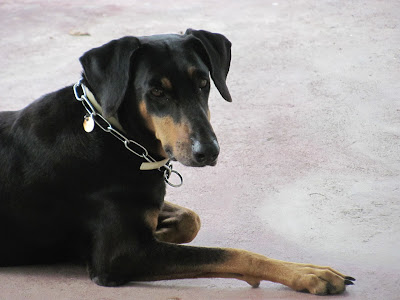 Venus realizing that with this property
she has a LOT to guard!

It suddenly feels like we're in a movie playing the lead roles of two adventurous souls that moved their lives to a foreign country.  And if that wasn't crazy enough they bought an old house that they fell in love with only to find it needs lots of work, as old houses do.  But in this movie the final scene hasn't been written yet, since it's not a movie but our lives in Chame Panamá.....along the gringo trail.
at April 27, 2012