What is taking so damn long???

Clyde here.  Sending out a report on the new house.

If you have been following the blog, you know that Terry and I have been working on getting the house "move in ready" now for over a month.  You would think we would be in by now!

But, things are done a little different in Panama!  There are a few things besides the painting and cleaning that I wanted to accomplish before we moved in.

The house is thirty years old and there are some out of date things in the house.  The electrical wiring is as old as the house with not a "safety ground" wire in sight.  Ok that's easy, I will just pull an extra wire in certain plugs and add a safety ground!  Nope, for some reason every conduit is 1/2" and already has four or five wires in it.  So what to do?  I put in plugs for the computer, TV, refrigerator, washer dryer and GFI plugs in the bathrooms.  How do you ask?  Well I mounted the plugs on the outside of the cement wall and used some "On the wall conduit" to hide my wires.  Now I have grounded plugs!

This house has a hot water heater, but it is only plumbed for the master shower and kitchen.  I like to use a separate bathroom than the boss but I do like my hot water!  So, I mounted one of those "suicide shower heads" so popular in Panama.  What, you ask is this?  Well it is a shower head that you wire into your electricity and the water is warmed in the shower head.  As I started wiring my new shower head I realized OOPS no ground!  No problem, I just piggy backed on to the GFI plug that I put in the bathroom. 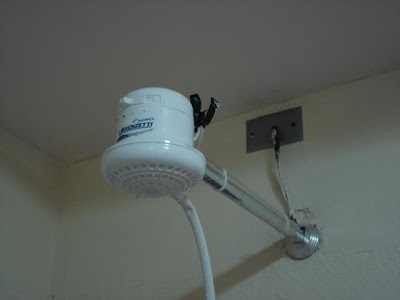 ﻿I got this picture of a
"Suicide Shower Head" off the net
My wiring job was much better than this one.
I hid my wires and connections in conduit!
Ok, next project...... install all new ceiling tiles in our Panamanian style house.  We have drop ceilings and the tiles have seen their better days!  So, first we painted the rails and then removed all of the ceiling fans and light fixtures.  So, how did they install all these from a drop ceiling?  Wires and chains that's how!  And of course no wire nuts whatsoever, just black electric tape!  So, I acquired  some metal framing (my buds Phil and Sharon donated this) and I did things right.  Can't have a ceiling fan falling down on us!  I had to do this for every light and fan in the house!  We also bought a few new fans and in order to have separate switches for the fan and light, again I had to add exterior boxes. 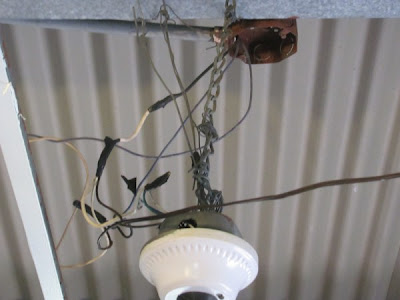 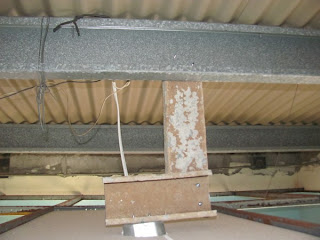 This is the new method of hanging fans
(Yes, I straightened it out after the picture) 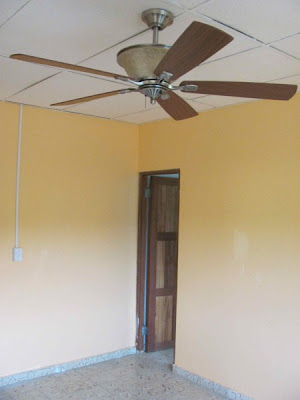 Here is a sample of the switch I had to put
on the outside of the wall.
This is also how I added the
three wire ground plugs
﻿
﻿We also decided to put in new toilets and bathroom sinks.  A pain, but not too bad until......................  I got to the little bathroom (maid's bathroom).  It is a very narrow bathroom and had a small toilet in it.  I found a small toilet but try as I might, I could not find one that would fit the hole in the floor (it was too close to the wall!)  No problem, they make an adapter for that.  It is called an "offset toilet flange".  This hand gizmo actually moves your hole for your toilet a few inches. 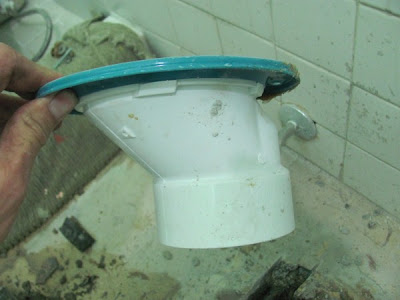 Offset Toilet Flange
you just take out the old one and put this one in!
Whenever you put in a new toilet flange, you have to bolt it to the floor, or your toilet will be a rocking!  No problem, I am ready for that, I have a special hammer drill that easily drills into concrete and also the proper screws etc.  So, I lined up the flange and started drilling.  And guess what?  I hit a water line!  I have NEVER heard of a water line placed in this matter!   Would you believe that this added about four hours to the placement of the toilet? 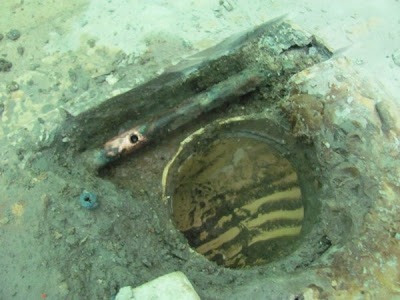 Here is the water line that I drilled a
perfect hole in to!  Yes, this is the opening
into the toilet drain pipe.
So, these are just some of the examples why things take longer in Panama! I consider myself a "handy-man" and have never shied away from any household projects.  But, now you can see why everything is taking so much longer here.
﻿
﻿
at April 18, 2012