They always said "things are bigger in Texas" but I'm starting to think that things are bigger here in Panamá, at least the bugs.  This place is beginning to look like some movie set where unusually big creatures fly and crawl around.  While sitting in our friends living room recently I noticed something flying around on their balcony that I thought was a bird or bat, turns out it was a big moth.  And they say they've seen an even bigger one than this so I think I need a bigger fly swatter.  This critter was the size of a man's open hand and posed nicely for photos on their glass slider.  Earlier in the week we came across this huge beetle on our walk.  It was dead, but huge and Clyde just happened to have his trusty camera with him.  Later on he posted it on face book to share with the world.  Another ex-pat named Dick saw the picture and had to post pictures of a dragon fly he came across near his place in David, Panama. 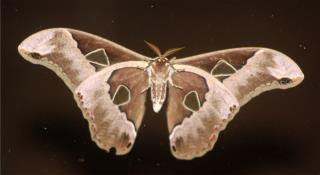 One Big Moth on a glass door at night 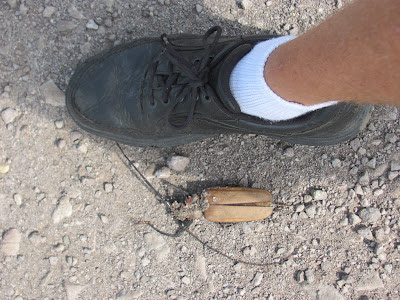 We came across the dead beetle on our
morning walk 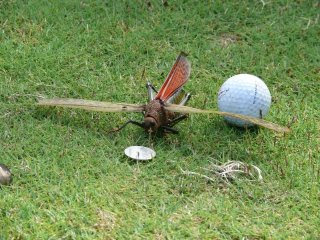 Picture sent to us from Dick Kesterke
near David, Panama 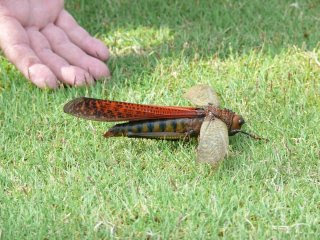 Another View of this critter 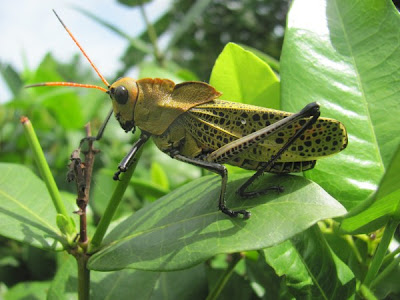 This was not a huge bug but
was able to capture his picture
For the past few days I've been seeing the world a little lopsided wearing only one contact lens.  My right eye has been bothering me for several weeks now, feeling like I had something in it or it was scratched. So on Friday I found an eye doctor in Coronado thinking there'd be a good chance that someone there spoke English.  Inside the little shop called "Optica Boyd Diaz" the doctor and his wife both greeted us in English.  After asking me a few medical questions he examined my eye on which he found a scratch and instructed me to not wear the contact in that eye for five days.  He also sold me some eye drops and told me to come back for a recheck in five days.  The visit and eye drops came to $38 and we were on our way.
Since my contacts are mono-vision, one eye takes care of reading while the other see distances, leaving me lopsided wearing only one.  But with a strong dislike for eyeglasses I'm stumbling along only being able to see close up wearing my left lens only.  But around the house I started putting my glasses on but blocking my left eye since it has the contact in it.

Woke up on Sunday around 8 am to the sound of loud latino music pounding from our neighbors house across the street.  It was a dreary rainy day, the kind that makes you want to crawl back into bed and stay there a while, which we did.  Due to the dampness it dropped down to a bone chilling 83 degrees in early evening which actually did make us chilly.  Did a few things around the house and tried to watch a movie in the evening over the music still blasting.  They finally turned it off around 7 pm maybe because they put the smaller kiddos to bed.  Although the music became annoying after a while, during most of the time we did enjoy it and I found myself dancing around the house.

Today I was up at 6am since the windows are supposed to arrive, and Panamanians usually start work early in the morning.  Hopefully the rain will hold off until the windows are installed so they don't drag dirt into the house.  But since a large porch surrounds the house, the installers will be under cover for most of the job anyway.  At the time we ordered the windows they said two weeks until delivery and it's been just about that now.  Perhaps next time the neighbor is blasting the tunes we'll be able to close our windows if we choose to block out some of the noise.

Hopefully a little glass will come our way today in the form of windows to keep out the giant bugs here in Panamá.....along the gringo trail.