Keeping fit doing "mango-arobics" yesterday while baking in the 90 degree sunshine, Clyde and I cleaned up the property.  My former personal trainer in Texas would have been proud watching me do the "mango squat" up and down, over and over until I had picked up hundreds of mangos.  With just what I picked up off the ground, I counted over 80 of the sweet, juicy little darlings to add to the pile we already had inside the house.  Not to mention the decayed, half-eaten, rotten ones that I had to pick up and discard.  Clyde spent the morning trimming more hedges and plants. 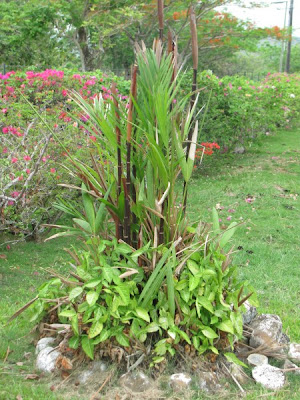 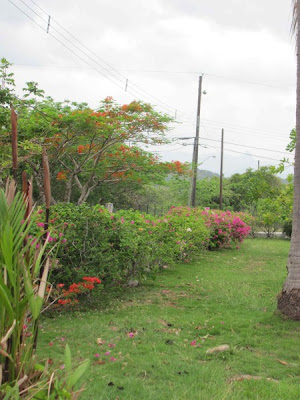 
Also picked up some cashew fruits carefully twisting off the cashew to save for roasting.  The fruit of the cashew tree or the "marañon" as the locals call it, tastes somewhat like tangy chalk with a stringy consistency.  I peeled and cut up some of the apples and cooked them with sugar and cinnamon like regular apples and it came out ok.  But I really wanted to try roasting the cashew nuts, or shall I say have my dear husband roast them. 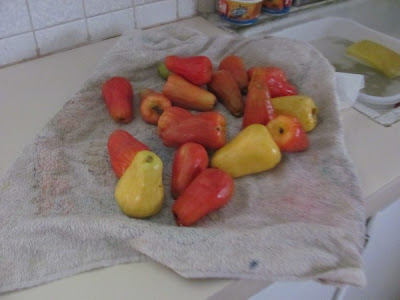 Cashew fruit or apples, minus the cashew on top
Roasting raw cashews is quite the ordeal, rather dangerous due to the toxic fumes that are housed inside the shell of the nut.  The toxins can permeate the lungs of the person doing the roasting and also burn their skin, according to what we read on the internet.  The process must be done outdoors while adorned in full protective gear.  Clyde reluctantly suited up and went outside after reading the instructions online.  The first step was to boil the nuts in oil for a few minutes and then remove the shells.  The meat inside the shell just fell apart like mush so we threw out the nuts and gave up on the whole mess for now. 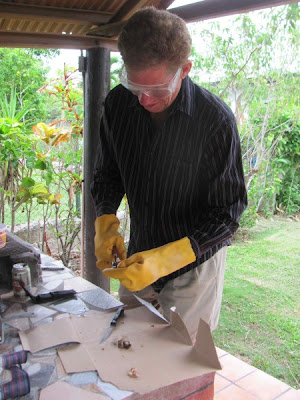 Clyde de-shelling the nuts
I did cut up lots of mangos and added them to onions, tomatoes and jalapenos for some salsa which went great over fish.  Back in Texas we used to buy a small container of ready-made mango salsa for $4.00 in the grocery store.  Clyde cracked open a coconut and shredded some up since he wanted to make a coating for fish.  We dined on the gazebo enjoying the coconut fish with mango salsa accompanied by arepas stuffed with pepper jack cheese. 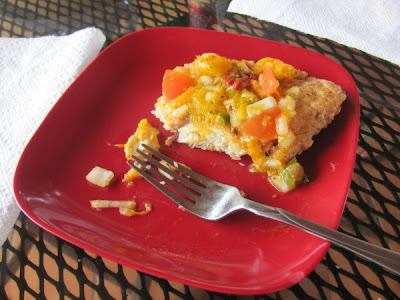 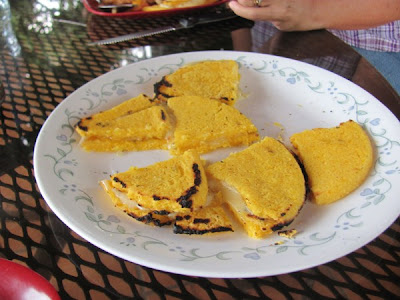 
On Monday we made it back to the gym after about a six week absence.  But with working on the house all day every day, climbing up and down ladders, painting, scraping, cleaning and fixing we had sore muscles constantly.  After the gym workout we spent some time lounging by the pool, something we had missed too. 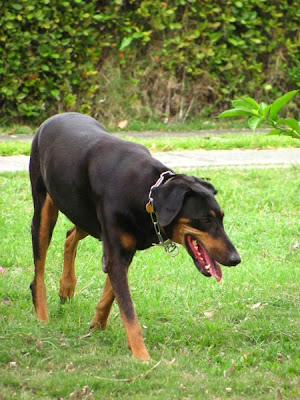 A slimmed down Venus, who has lots of land to run around on,
although she has taken a liking to all the free fruit

Later that day Clyde ventured into Capira and La Chorrera to close out the accounts for the electric and cable/internet in the rental house.  But unknown to us apparently Monday was the end of a long holiday weekend for the locals.  Traffic was heavy into the city from the beaches, schools were closed and so was the electric company.  And ironically enough the internet was down at the internet and cable company, so they could not close out the account.  Labor Day here is on May 1st and they apparently celebrate on the weekend prior to that date.

A very cloudy start to this day, but this is the beginning of the rainy season.  Will make an attempt to walk the dog then we're off to the gym.  After that perhaps we'll get a few more things done around the house or we may do nothing at all, because after all this is retirement in Panamá......along the gringo trail.