A Little Something Fishy.....

You would think that in a tiny country surrounded by two oceans it would be easy to buy fresh seafood, but it's really not, unless you know where to look.  There are a few fish markets where local fishermen sell their catch of the day but they usually sell out early in the morning.  Directly on the beach in Gorgona is one fish co-op and there's another down the road in San Carlos.  But since the cook of this house who's also my loving husband doesn't like to get up early, we usually miss out.  Most of the fish we eat is frozen tilapia filet's from Price Mart in Panama City. Although it's healthy, low in calories and we just love it cooked with Cajun seasoning on it, sometimes we crave something else.

One day recently we craved shrimp and went out to buy some.  Since it was late in the day all the local fish markets were closed.  Coronado has three nice, modern grocery stores but there was no shrimp to be found in any of them.  Remembering back to our first trip to Panamá, when we first set eyes on the El Rey Shopping Plaza in Coronado we spotted something we couldn't forget.  A local man stood near the street in the parking lot with his arm raised up, proudly displaying large shrimp.  The ugly creatures were basking in the hot sun and we couldn't help but wonder how long they'd been out of refrigeration.  Actually I thought it was rather disgusting and couldn't imagine buying shrimp that way.  But since we've moved here other expats talk about buying shrimp and other fish from him, so it must be safe. 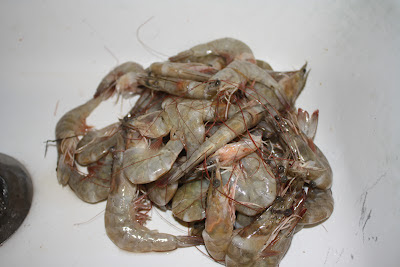 Two pounds of fresh shrimp
﻿
His name is Jorge Gonzalez  and apparently he buys shrimp from local fishermen then resells them at a profit to tourists and locals alike.  Monday afternoon we stopped to check out his stash and bought some large, lovely shrimp for just $3.00 a pound.  Clyde grilled up some shrimp kabobs for dinner, a delicious treat that we haven't had in a while.

Yesterday Clyde moved the chickens from the brooder into a larger co-op with trays for laying eggs.  Venus our dobie is still way too interested in them, poking her snout through the chicken wire trying to get to them.  Yet as soon as Clyde stops paying attention to the chickens, so does Venus.  Not sure how this whole thing will turn out, but these eggs we don't have yet are turning out to be rather costly and stressful.

Woke up today to a gorgeous 81 degrees with less humidity.  The wind's blowing, the sun shining bright and our neighbors are yelling at each other in Spanish.  Ah life in Panamá....where a Spanish lesson is only an ear shot away.  They're a young couple with two toddlers, which can make for a stressful situation. An American guy married to a local gal, they keep to themselves other than the occasional wave "hi" when we pass them in the street.

Another rough day in paradise.  First our morning walk with the dog, then off to the gym followed by chillin' out in the pool near the gym.  While hanging out Clyde made the comment that this is "hump day" which was a joke in our working days.  Hump day refers to it being Wednesday, which means that half of the work week is gone, and all eyes are focused on the weekend.  But since we're no longer part of the working world, hump day doesn't matter.  Wednesday is just another day like all the others now and I might add that it's absolutely wonderful!  People worry about being bored during the retirement years but it's nothing but delightful.  Having time to do whatever I want to is just grand.  Be it exercise, taking a walk, doing a craft project, reading a book or taking a nap. It's having the freedom to enjoy life without work getting in the way.  It's nice to be able to enjoy our home, our relationship, and our life and all that it has to offer.  I can't imagine ever being bored as there's so much to do, I just don't know how I ever had time to work.

Tomorrow perhaps I'll do, whatever it is I feel like doing once again, while the rest of the world is at work, and we're here embracing life....along the gringo trail.