Every morning when we walk Venus we pass by a tiny, cement corner building with a patio full of tables and chairs.  The small dwelling has a large window open on one side where people inside can hand out food.  Every morning there's people sitting at the tables but since there's no sign indicating it's a restaurant, we're just not sure.  Lazy street dogs protect the area, including some new feisty pups with an attitude.  An incoherent, old, Panamanian man always rambles something to us in Spanish after we say "bueno dio" to him.  His speech is so slurred together we're sure we wouldn't understand him if he were speaking English.  Usually toddlers are jumping around and playing too, perhaps "abuela" is babysitting her grand kids.

A few days ago while passing by we heard a tiny voice yell out "gringos."  It caught me off guard and what they said didn't even register at first.  Again we heard "gringos....gringos" in a high pitched, tiny voice, as we walked by. Clyde looked at me and commented, "out of the mouths of babes." He said the child was a "little bitty fart, maybe a four year old."    We laughed about it and I wished we would have stopped to see how the child reacted to us getting closer.  Was this a racial remark or just a kid repeating a word it had heard?  Did the word conjure up an image of a bad, white person that wasn't wanted in this country?  Each morning we walk by the adults gathered at this little spot always say "bueno dia" or make other small talk about the weather.  And we make a point of saying good morning or giving a wave to every Panamanian that we pass by, either on foot or in vehicles.

Also on our walk we pass by a lovely house on a working sheep farm, that sits across from this little airport.  Farm hands are usually out in the field working with the animals while two mean, barking dogs protect the property.  The house is usually vacant except for the occasional weekend party.  Lately we've noticed large amounts of wood laid out to dry in the hot sun.  One day when Clyde went on the walk without me he spotted the home owner there and stopped to inquire about the wood since he's looking to buy some.  We met Manuel, the manager of the sheep farm. 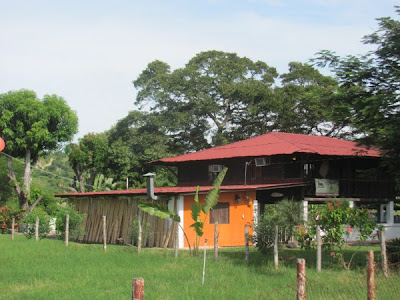 This is the house at the sheep farm 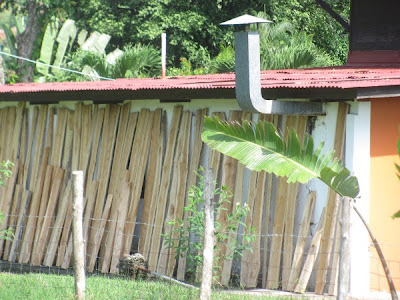 Some of the teca (teak) lined up to dry
﻿
Manuel speaks some English and asked Clyde to come up with how much wood he needed in square feet.  Next he and Clyde will go to the land he has to pick out a teak tree.  Manuel will have it cut down and then it will be taken to another place to be cut into planks and then planed, after which it will need to dry before it can be used for furniture making.  Clyde is so brave about approaching the locals and speaking to them in Spanish!

We noticed these neighbors have corn drying in the hot sun.  The locals at this home always seem to be busy doing something.  Victor the husband seems to collect and sell junk for money.  In fact he's the one that took all of our old, filthy toilets, sinks, ceiling fans and whatever else we put by the roadside. But he always asks Clyde if he can have them first then goes to get his wheel barrow to bring them home.  Two generations seem to live in this house, or in other homes nearby.  The women spend the day washing clothes, hanging them out to dry and cooking.  The daughters seem to help Mama with the chores while the boys help the men.  It seems everywhere we go around this area, we spot Victor collecting junk, selling mangoes or hustling up other work.  Either he really gets around or all of the locals look the same. 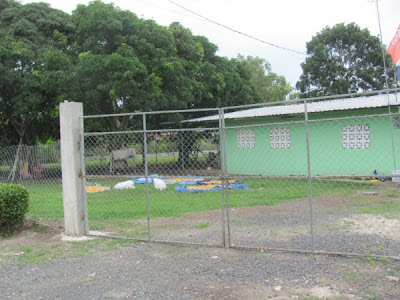 Victor's yard with corn
laid out to dry in the sun
The chicks are growing nicely and we're trying to divert Venus' attention away from them.  The first week or so she'd sit in front of the brooder staring at them, mesmerized and drooling.  It's the drooling that has us worried since that's a sign she wants them for her next meal and not as friends to hang out with.  So I did some online research about how to stop dogs from going after chickens, even though it's a natural predatory instinct.  Someone posted his solution and since it was easy and free I mentioned it to Clyde and this is how it works.
The male head of household must let the dog know that the chickens belong to him.  And to make the dog understand this one must think like an animal.  In the dog world when a dog pees on something it's his way of marking the area, and claiming it as his or her own.  So the male head of household being Clyde, would pee around the chicken coop.  He then turned to Venus and told her in a loud voice, "these are my chickens."  Then he made her come over and smell where he marked and then chased her away, again speaking loudly that the chickens are his.  It has worked for the most part and she only ventures back to the coop when Clyde goes out to feed and tend to them.  Before that she would sit there all day long just staring at them and trying to eat the poop that falls to the ground.  She still does try to eat the chicken poop sometimes and Clyde yells at her and chases her away.  I thought we'd spare you a photo depicting the above situation, although Clyde was all too willing to pose for the shot.  ﻿

Poor Venus is stressed enough barking at the birds taking up residence in what she thinks is "her mango tree."  She sits underneath the tree barking, jumping up and wondering why there are no more mangoes falling down from the tree.  Surely it must be those pesky birds up there, she must be thinking.  But mango season is over until next year when she'll once again have an endless food source falling from the sky, or so it seems.  If you happen to see some round, fat, mango shaped birds flying over your house perhaps they're the ones eating her mangoes.
Took a trip to Westland Mall yesterday for a few things.  It's on the Pan American Highway near La Chorrera and boasts three floors of great shopping.  Picked up some pretty red and white floral, linen "mantel de mesa" or tablecloths for our outdoor tables.  They were on clearance for $2.99 each along with some matching place mats for just 49 cents.  Clyde always stops to look at ladies shoes amazed at how nice and how cheap they are, but later complains about how many shoes I have.  So once again I had to stand strong and tell him not to encourage me to look at the shoes, since I really don't need anymore....right now anyway.
Since Clyde was starving we stopped for a bite to eat at the food court.  Amazed at how many American fast food restaurants have made their way to Panamá.  McDonalds, Burger King, Wendy's, Pizza Hut, Popeyes, KFC, Subway, Quiznos, Dairy Queen, and Duncan Donuts just to name a few.  With all the comforts of home we settled for Leonardo's a local pizza chain cheaper than the US counterparts.  For around $6.50 we shared a combo pizza with 8 slices and a drink.  The pizza was slathered with a heavy mix of green and black olives, mushrooms, pepperoni, ham, and chicken flavored with some orange stuff which gave it the appearance of broken up crunchy cheese doodles. For a moment I wondered if they did put broken up cheese doodles on a pizza since nothing would surprise us here.  After all they put strange things like tuna and palm hearts on pizza, and mix jello in with ice cream sundaes, so we can't let anything surprise us.
As for now headed out to pick up a few groceries for tomorrow's fiesta here at our casa.  Since Monday will be our ONE Year Anniversary of living in Panamá we needed to celebrate.  Monday is also Clyde's birthday giving us even more reason to party.  And something about retired people and parties....all we need to do is say the word and they come a running with potluck dish in hand.  And we're the same way always ready and willing to visit someones house, enjoy their company and share some food.
A little food, good friends, a few drinks and a little chicken poop make life one big adventure in Panamá....along the gringo trail.
﻿
﻿