As each and every new expats makes their way to the beautiful isthmus of Panamá, it seems to makes life here just a little bit weirder.  Last night we pulled into Novey, a large hardware, housewares and other stuff store in Coronado to get screws.  But as we drove toward the store, out of the corner of my eye I spotted, a polka dot poodle?  No, I hadn't been drinking or anything like that.  Clyde pulled out his trusty camera that he carries everywhere and we walked over to take a picture.  Turns out the dog and it's owners recently moved here from Austin, Texas where the city slogan is "keepin' Austin weird."  Guess they thought they were doing their part, by giving their perky, white poodle pink, blue and lime green spots.  But not only were the spots bright, they actually were big, pom pom like balls of fur, that stuck out from her tiny body.  I'm trying to be amusing here but I actually thought the dog looked adorable, and if I could figure out how to make our doberman look that way, I would. 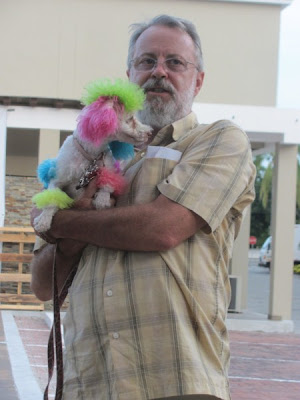 Turns out that David, the man who was "manly" enough to stand outside a store with a polka dot poodle, just arrived in Panamá yesterday.  His wife arrived a few months earlier and the couple reside in El Valle de Anton with the adorable pooch.  An avid follower of this blog, David immediately recognized us.  In the time we stopped to chat and take pictures, a dozen or so women stopped to snap photos of the dog who proved to be a perpetual "chick magnet." 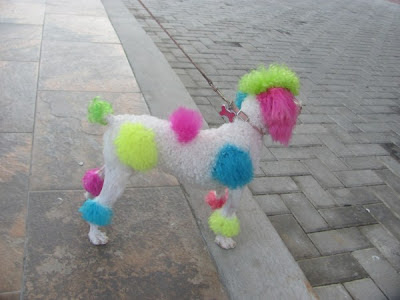 Once inside Novey Clyde said "let's see if we can spot his wife Candace."  And since no one is a stranger to my friendly husband, he managed to find the woman and we introduced ourselves.  But I couldn't help but wonder how her pretty white hair would look with brightly, colored polka dots, so she and the dog would match. 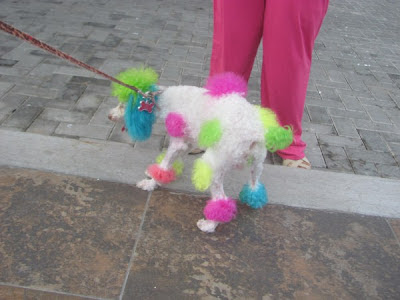 Notice that she has one pink ear, and one blue ear

Always nice to run into blog followers, especially those from the lone star state of Texas.  In a country full of stray dogs that go unnoticed, the perky, white, polka dot poodle can't be missed.  And her warm, friendly personality go along perfectly with her bright, colorful appearance.  Yesterday we saw a polka dot poodle, and today who knows....perhaps a pink elephant....since we never know what's around the corner....along the gringo trail.