The above statement has never been more true!  November is the last of the rainy months in Panama before we hit the four to five month dry season. Despite what you might think, most of us living here actually enjoy the rainy season.  The whole country is covered with a blanket of lush, tropical rain forest with green mountains in the background. Gorgeous tropical plants, fruits trees, shrubs and flowers grow everywhere! Our skin and hair feel moist and supple as we're enveloped in a layer of moisture on a daily basis.  Come the dry season I find myself using lotions and creams more often while all the greenery outside turns brown and dies.

Today began as a bright, sunny day with a gentle breeze blowing as I drove off to the gym.  I brought along my swim suit and toiletries so I could shower there and take a dip in the pool before returning home.  The town turned the water off so as a way to conserve our reserve water in the tank I thought I'd use their well water instead. But soon after I got to the little resort where the gym is I noticed that their power was out. And with no  power they had no water since the pump couldn't pump water from the well.  Being the trooper that I am I proceeded with my workout for over an hour, lifting weights, working on my abs and stretching in the end.  Drenched in sweat since I couldn't use the air conditioner with the power outage, I really needed to cool off in the pool. But by the time I was done exercising it had started to rain hard.  I sat outside on the covered patio having my lunch of a protein shake and an apple, hoping that the rain was just a passing shower. At one point the rain let up a bit so I changed into a bathing suit and cooled off in the pool.

But before long the dark clouds rolled in again along with lightning and thunder so I got out of the pool and took cover.  By this time the lightning and thunder were fierce as the monsoon like rains pummeled down.  I thought about waiting it out but the sky was black and there didn't seem to be an end in sight. Since I was already wet I decided to just wrap a towel around me and drive home in the bathing suit.

The highway was flooded with cars and buses driving through the water like it was nothing, so I followed along behind them. But I'd always heard that driving through water was not a good thing, and I was worried that my car would stop running and I'd be stuck on the side of the road wearing only a bikini. I managed to make it home and stepped out in the heavy downpour to unlock the front gate to our property.  One of our neighbors kids was on his front porch watching this crazy gringo lady fighting with the lock on the gate, totally drenched in a bikini.  As I made my way up the driveway Clyde came out of the house with a large towel for me to dry off with, but I had other ideas. 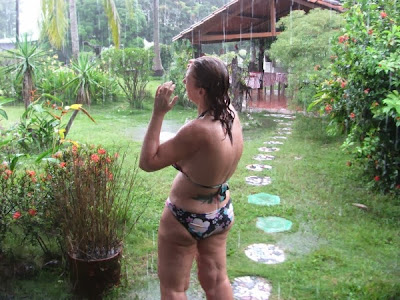 An afternoon shower in the rain 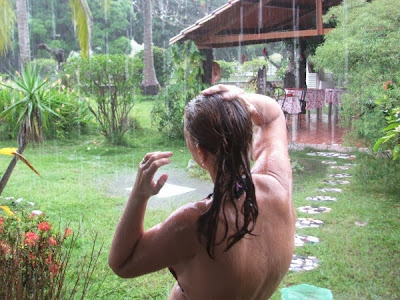 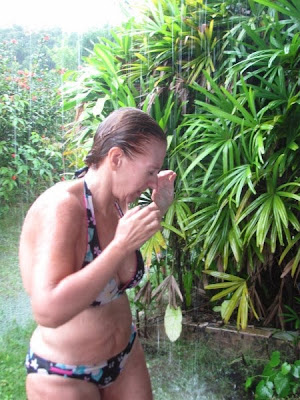 Rainwater in my eyes, not good for contacts
﻿

Since our water was shut off it might be a fun idea to shower in the rain.   I pulled out the shampoo and body wash I had in my beach bag and soaped up before stepping out in the rain to rinse.  Although the rain was beating down hard it didn't seem to have enough force to rinse me off, so I stood under the edge of the roof where it was running off the house. It still wasn't much better but I had to finish what I'd started, so I added some conditioner to my hair and continued to rinse off.  Clyde ran to get the camera out of the car to snap a few pictures.  After I finished the rinse off with the bathing suit on I decided to pull it off and wash off the rest of me.  Our land is large enough that I was able to be out of sight from the neighbors, but not hidden from the roving photographer. 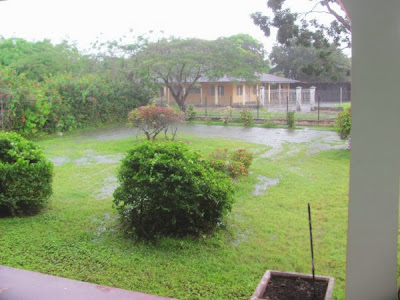 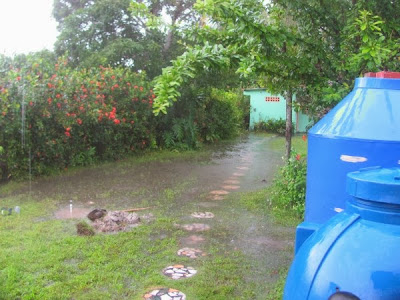 Side of property that goes back to storage shed, also flooded 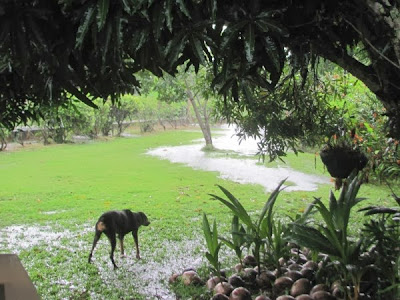 I had a blast and was smiling the whole time as I ventured out for a refreshing shower in the tropical rains so common here.  Severe lighting and thunder continued along with the rain for hours as it turned our yard into a lake.  I've never in my life seen such downpours of rain or heard such loud thunder, along with lightning that fills the sky as I have living here. It's nice to be safe and dry inside the house now until the next time I get the urge to go singing in the rain naked in Panama....along the gringo trail.
at November 07, 2013