Extending Our Visas And More.....

Visitors to Egypt are issued a "visa on arrival" stamp at the airport that allows them to remain in the country for 30 days. This was an easy process of paying $25 to a jovial, singing man in a small airport bank who applied the large stamp to our passports. But what if a visitor wants to stay longer than 30 days?

When we first discussed this house sit with the homeowners we questioned this, since they had planned a holiday for five weeks and asked us if we could stay that long? We were fine with staying that long as long as we could renew the visa. Soon after we chatted with them they made a trip into Hurghada to the visa office to find out for us. They found out that we were allowed to extend it for six months.

Since our visa was set to expire yesterday (September 14th) we made the trek into the city on Wednesday to begin the process. A taxi driver offered to take us, wait one hour for us and drive us back here, about a 45 minute journey each way for the price of 450 LE (Egyptian pounds). This translates to $25.50, way to much for us so instead we decided to take a bus. Right here in El Gouna, the resort, we were able to pick up a public bus for the 45-minute ride into the city for the low price of just 56 cents each. Since we really weren't quite sure where to get off Clyde asked the driver to let us know when to get off, which he did. He pointed us in the general direction and off we went.

The problem, however, is that ALL of the signs on the government buildings are written in Arabic so we really had no idea which one to go into. Eventually we noticed white folks that looked like European tourists leaving the building and assumed it must be the right place. 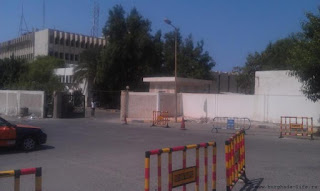 
Upon entering we had to walk through a scanner, metal detector along with having our bags searched, a very common practice here. The guard looked at Clyde's camera and reminded him that NO photos were allowed inside the building, although we have no idea why?

We entered a room full of people, some were standing in lines while Egyptians were sitting. There were women with their heads wrapped wearing long dresses and men dressed in robes. White looking people stood in lines holding paperwork in their hands along with their passports, so we assumed that we needed to follow suit. There was really no order to this mess and eventually we figured out that we needed to get forms to fill out, step out of line, fill in the paperwork and then resume our place in the queue. When we finally made our way to the clerk behind the window, a woman with her head wrapped wearing a long garment, she took our paperwork along with our passport and sent us to another window to pay. Clyde paid our 1140 LE (about $65 for both) and back we went to the first window to show the receipts. We were told to return the following day after 1pm to pick up our passports with our new visa stamp.

So yesterday once again we made the long trek by bus into the city and walked over to the visa office. This process was fast and just a matter of picking up our passports, the only TWO US Passports that were sitting there on the desk. Our new visa stamps allow us to remain in Egypt for up to 6 months, although we will only be here another 5 or 6 weeks. 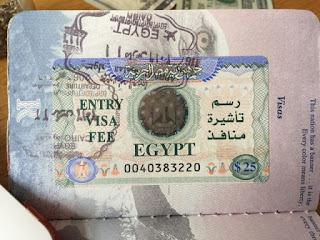 Original Visa Stamp Plus Another Nearby

Before leaving Hurghada we had to find an Etisalat store to add more minutes to our Egyptian cell phone sim card. For only around $7 we added plenty of data to our phones, something we do in every country we visit.

We hopped on a bus headed back to El Gouna. Upon entering the resort security guards entered the bus and checked ID's on some of the Egyptians. Many of them are coming into the resort headed to work. But the resort DOES offer housing to many locals that do work here so some could have been going home.

As the uniformed security guard passed by us on the bus he stopped and asked, "do you live here?" Clyde said "no we are just visiting." The man looked at us with a smirk and asked, "do you have any bombs?" Clyde smugly answered by saying, "no, not today." Security checkpoints are just a part of life in Egypt, as we have seen in many other countries we have visited.

Part of our life on the road around the world involves stopping along the way to see dentists and doctors for routine checkups. The last time we had our teeth cleaned we were in Wales and saw a dental hygienist much like we would in the US.  Since we were past due for cleanings we made appointments with a German dentist here in El Gouna for cleanings. Semi retired from Germany the gray haired gentleman was dressed in white shorts, a white short sleeved sport shirt and flip flops. Unlike any other dentist we have met along the way I went first into the office for my cleaning. I was shocked at what came out of his mouth and he proceeded to tell me that I did NOT need my teeth cleaned because I have NO plaque. He explained that plaque can be seen on the teeth and because he saw none, there was nothing to clean. Strange I thought since I have been going in for dental cleanings most of my life and have NEVER heard an American dentist or hygienist say such a thing.  I always was told that I have little to no plaque, but never did anyone refuse to do the cleaning anyway. But this German guy DID tell me that my expensive bridgework needs to be replaced, a point that I argued but did not win. But surely I will get a second opinion before spending tons of money replacing something that's not broken and will not have it done here as prices were a big high. The cost for each dental cleaning was $137 but I ended up paying less since my teeth did not need the cleaning after all. This is the most we've paid in all of our travels but then this IS a ritzy, resort and probably would have cost less elsewhere in Egypt.

Afterwards we stopped for lunch in the downtown area of El Gouna. But the only restaurant that was open for lunch was Zomba, the cheap Egyptian food place where we ate a few days ago. I enjoyed a plate of shawarma chicken, slow cooked meat with onions, peppers, and spices served with rice. It was really tasty. Clyde had his usual Koshari served alongside home made flat bread and hummus, for another cheap, good meal. 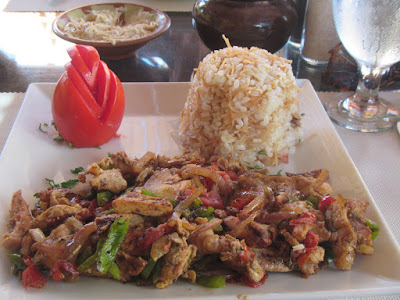 Another productive day in the crazy, bustling city of Hurghada, Egypt.....along the gringo trail.
at September 15, 2017