Since conditions in our Luxor villa turned out to be less than perfect we decided to move on to better horizons. While the house itself was spacious and decent, the neighborhood surrounding it was a poor farming community. And while we certainly are used to living among locals in the country after being in Panama, this was far worse. Looking down from the balconies of the house we could see directly into mud huts through loose, straw roofs that were just laying on top. There we saw cows, chickens and piles of poop to go along with them. And where there is poop there are flies and since the house had no screens, we either had to keep it open and live with flies or close it up despite the 112 degree temperatures. We found ourselves spending much of the day in one of the bedrooms with the air conditioner on playing on our computers.

And one of the main reasons that we booked the villa was because it offered a private swimming pool in the yard. But immediately upon arrival we noticed that the pool was green and muddy looking with a thick layer of oil on top. The manager of the property and his brother the pool guy blamed the condition of the pool on the last renters that used too much sun screen. But whatever the cause the poor pool guy who surely never owned a pool of his own seemed to have absolutely no idea how to fix the problem.

The villa was cheap because it was located on the West Bank of the Nile river, far away from any of the tourist attractions on the other side. While this was ok with us since we had already seen most of the tourist sites and were just looking for a place to relax, we were stuck at the house with no transportation. The manager of the property was at our beckon call to take us to buy groceries or anything else that we needed but we really hated to rely on him for everything.

Being world travelers we have shopped in grocery stores through Europe, Thailand, Latin American countries and more but Egypt was way more difficult. I enjoy visiting new grocery stores to see what they carry and what prices are like. As soon as we entered the small store a local man attached himself to us, pushing the cart and grabbing everything out of our hands that we picked up. We smiled and thanked him trying to persuade him to go away, but he would not take no for an answer. So as we tried to figure out just what each of the products were the man followed along trying to help or more typically looking for a tip.

So on Thursday of last week Clyde made arrangements for an apartment In Hurghada near the Red Sea and driver to get us from Luxor to Hurghada, a 4-5 hour drive. To our surprise the driver called Clyde back explaining that he needed to fill out, "permission to travel" paperwork because we are Americans. And he would NOT be allowed to pick us up from a private home, but instead we would have to be in a hotel. Now this put a damper in our plans to get out of the villa in Luxor and with the paperwork and us moving from the villa to a hotel it would take a few more days. Yikes....

Clyde decided to call our guide and friend Hatem that we used throughout our Nile cruise to see if he had any other ideas. He suggested that IF he call a driver who had already transported us there would be no need for new paperwork and we could proceed as planned. So he arranged for a driver that we had already met to pick us up the next morning on the other side of the Nile to take us to Hurghada.

Our next morning began early with a ride from the manager of the villa to the river. There instead of the National Ferry boat we opted to pay for a private boat, since we had luggage to get us across the river. We made the short ride across the river on a spacious boat with all of our stuff. But with other boats in the way on the dock the boat had to stop out in the river forcing us to climb up and over THREE other boats, over a steel beam and up three flights of stairs before we landed on the street. Fortunately there were plenty of men and boys around looking for money that were all too willing to transport our luggage.

A while later our driver showed up and we made the long, boring ride through stark desert scenery over to Upper Egypt. Here we are staying in a one bedroom apartment, complete with a kitchen and balconies that overlook the pool. The first day we arrived we met and chatted with a young English woman who was here with her Egyptian boyfriend and his family. But since they left yesterday since then we have been surrounded by NO other gringo's, just Egyptian tourists.

And while we have no problem being around Egyptians there is that one little thing about the women.....they go into pools and the sea FULLY covered from head to toe in clothing. These poor women do NOT wear bathing suits or even shorts but instead wear gowns that drag in the water while their heads are wrapped up too. In the hotel pool I AM wearing a one-piece bathing suit to go into the pool or sit in the lounge chairs but our trip to the beach today was different.

Today we took a walk down the street, along the sea past hotels with private beaches to find a public beach. We paid a small entry fee of about 50 cents each, then paid another few pounds to rent chairs and an umbrella to enjoy the sights. There was NOT another white couple on the beach, just Egyptian families having fun in the sun, kids playing in the sea and EVERY woman was covered from head to toe. While I REALLY wanted to take a dip in the tranquil, clear waters of the Red Sea I could not bare to take off my shorts and tank top to be the only female in a bathing suit surrounded by conservative, Egyptian women.  Instead we decided to leave and take a taxi back to our hotel to cool off in the swimming pool. 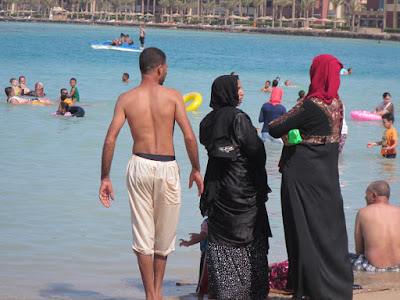 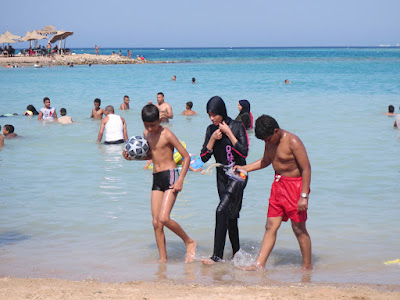 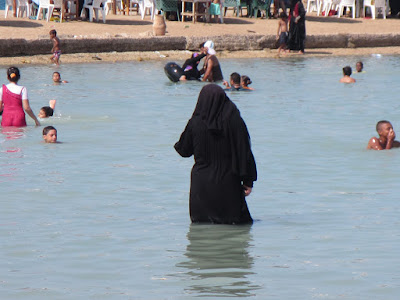 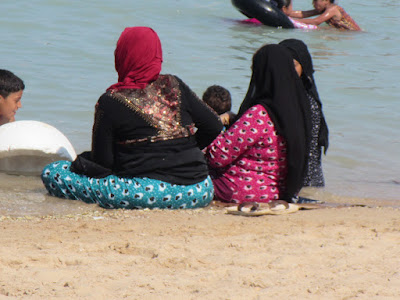 Sitting In The Sand Too
﻿

Hurghada is a city of about 300,000 people full of beachfront resorts, some very pricey for European tourists while others are simple and geared toward Egyptian tourists from Cairo. One of the largest resorts near Hurghada is El Gouna, a city within itself where we are going next week for our five week house sit.

Yesterday we took a taxi to Senzo Mall, a modern mall full of European expats and tourists. There we enjoyed shopping in a large, modern grocery store where we went searching for hair dye among other things. But since all Egyptians have dark hair there was little in the way of blonde or brown hair dye. We opted for a light brown which really covered up our sun lightened hair making us look rather different. But soon enough the strong Egyptian sun will lighten our darkened hair once again making us stand out as gringo's.....along the gringo trail.